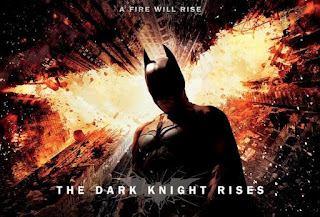 What's it about?
The closing chapter in Christopher Nolan's critically acclaimed blockbusting trilogy of Batman films, which began with 2005's Batman Begins, and continued with 2008 phenomenon The Dark Knight. It's now eight years since the events of the previous film, and we find Gotham to be on an even keel at last. Bruce Wayne is now a shut-in, and Batman is no more ... that is until Bane, a muscle-bound brute of superior intelligence, seeks to turn the city over to its people in his own inimitable way.

On a personal note I have to say that while I was always going to see this movie, the trailers leading up to its release - for some reason - didn't inspire all that much anticipation in me. Perhaps I was spoiled by those fantastic trailers for Prometheus, however in a way this helped with my viewing experience. I knew I'd enjoy the flick, and I knew it was going to be good, but I didn't walk in with my anticipation set so high, that no movie imaginable could ever conquer such a height. Instead, having sought to avoid spoilers and temper my excitement, I had a better viewing experience as a result.

Bruce Wayne, having hung up his Batman gear after the events of The Dark Knight, has become the stuff of Gotham rumour and gossip - imagined as a deranged Howard Hughes-like hermit, he hides away on his vast estate as the rest of the city enjoys the tranquillity of Gotham's now-safe streets after a law enacted in the name of Harvey Dent has locked thugs and crime lords alike behind bars. Enjoying this new-found freedom more-so than anyone, are the city's rich, whose only real worry is Anne Hathaway's cat burglar (aka Selina Kyle), who seeks a golden ticket out of her life of crime. Long gone are the sly puns and purring of Michelle Pfeifer, and whatever the hell Halle Berry was thinking ... no, here, much like with Heath Ledger's Joker, comes a more realistic adversary based more in reality and less in theatricality. Rest easy, the early fears of discovering that Nolan's trilogy closer was to feature Cat Woman, are to be found nowhere within the confines of this film - Hathaway absolutely knocks the role out of the park.

Click "READ MORE" below for the rest of this spoiler-free review...

The real centre-piece of the film however, is Tom Hardy's Bane - his voice, possessing no real accent or region, is indeed somewhat troublesome to understand in places, but whenever his speech is directly important to the plot, there are no problems hearing the man-mountain enunciate. Whereas The Joker brought chaos and mischief with a side portion of flair to The Dark Knight, Bane - matching the power and intimidation of The Joker, with added smarts, muscle, and anarchy - is a truly fearsome villain. Hardy's stunning physical transformation, combined with his terrorising performance, is utilised just enough to keep him from becoming repetitive or predictable. His actions inspire fear and awe in equal measure, and his bruising bouts with Batman prove to be wince-inducingly brutal.


Rounding out the cast are old favourites - such as Alfred and Commissioner Gordon - accompanied by fresh faces to the Batman world. Marion Cottilard somewhat gets short shrift in the second act as Miranda Tate, but nonetheless provides a memorable addition to the cast. However, the real treat in the cast of new additions is Joseph Gordon-Levitt as Blake, a young cop who was once an orphan, and is looking to restore order to Gotham's streets in the wake of Bane's dogma.

At the best part of three hours, the running time might sound bloated, but not once was there a scene that didn't provide meaning, or additional information for the plot or various character backgrounds. While the first act moves at a slower pace, it certainly isn't lacking for thunderous action (including a spectacular mid-air hijacking of a aeroplane at the very start).

Some have complained about the pacing of the first half, but the film - which works extensively with the "Rise" theme of the title, as well as a sense of all things coming full-circle - is all working towards the culmination of a journey witnessed across three films. Without spoiling anything, the final act proves to be a tense, thrilling, and pulse-pounding battle of wits and muscle as Hans Zimmer's score beats your chest and boils your blood with eye-widening fervour. Blockbuster spectacle mixes perfectly with well-crafted tension-building, and a much-needed sense of catharsis for the trilogy. When Mark Kermode reviewed the film, he spoke of a sense of relief (in a good way) come the credits, and that makes a lot of sense - there is a sense of completion that proves to be not only satisfying, but memorable.

Densely packed, much like The Dark Knight, Nolan's final chapter in his Batman trilogy not only lives up to its two predecessors, but provides the much-wanted sense of shock and awe befitting of an ending. Jaws may indeed hit floors, hands may indeed be gripped tightly, and tears may indeed be shed. The fangasm we always wanted, but feared might not be possible, has arrived in grand, operatic style. Great.
Posted by Nick Thomson at 10:06