And so begins a new screenplay...

Blogging has been a bit light in the last few weeks, and there's a reason for that.

For one, having wrapped up "The Problem of Evil", I returned to my comedy/drama feature screenplay "Summer Road" - which has been retitled "Drifting" - to do a couple of fresh drafts on it to bring it up to standard. That in itself was a great learning opportunity, to see how I could further develop a screenplay, how I could add more flesh to the side characters, introduce numerous subtleties, and generally bring fresh ideas to the table, after having had some more writing experience since I had last touched it. So that re-drafting was finished a couple of weeks ago and since then... 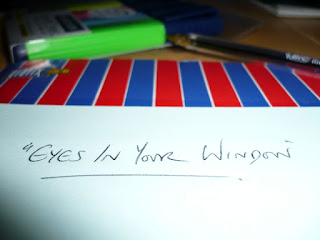 I have been focusing on my next - brand new - screenplay. While Drifting and Allen Bridge were both feature length screenplays, my next - Eyes In Your Window - will be for the television drama format, specifically a three-part post-watershed serial. So far it's a working title, and a title that I struggled to find at all - I'll see how it fits as the writing gets underway. At the very least it has a name for the time being.

Click "READ MORE" below to find out more about my next screenwriting project...


The initial idea came to me in the morning hours of June 25th 2011 before I woke up - I had a dream which featured what appeared to be a handful of scenes from a film - they were extraordinarily vivid in my sleep, and when I awoke I immediately wrote down as much as I could recall. Then over the intervening months I have jotted down ideas as-and-when they have come to me (along with ideas for various other possible scripts), but it wasn't until a couple of months ago when I had a specific image pop into my head that really set the creative juices flowing - an image which made the decision that this would be my next screenplay (more on that in due course).

So for the last few weeks I've been beavering away, scribbling down every idea that springs to mind - usually as I'm settling down to go to sleep (hence why I've had a text book and pen by my bedside) - and such is the way, one idea births another idea, which births a character, which births a potential plot strand, which unleashes a whole new series of ideas, some of which circle all-the-way back (and simultaneously charge forward) to ideas I'd had as far back as page one on this project.

The writing proper hasn't begun yet, but it will soon be underway - right now it's all about taming this wild myriad of ideas (in no real chronological order) into the aforementioned serial drama format. There's a lot of work to be done, but I'm very much looking forward to delving into this new world I'm gradually uncovering in my mind.

Ultimately the intention is, as I might have mentioned in an earlier post a while ago, to get a couple of TV drama scripts done so that I have a good catalogue of scripts in different genres and styles with which to approach agencies, so I can seek representation. It's so often about who you know, rather than what you know, and when you don't know anybody you need representation ... but to get representation, you need a portfolio of different screenplays. Two feature film scripts are done (to a standard that I'm proud of), so as I've said, the aim is to now get two different television drama scripts written.

Similar to Allen Bridge last year - but perhaps not so frequently - I'll be doing a blog series for Eyes In Your Window.
Posted by Nick Thomson at 19:19