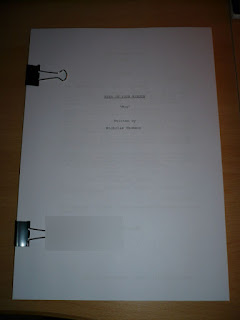 Eyes In Your Window is complete! The first (of three) episode has been redrafted (after taking some time to show it to fresh pairs of eyes to get some feedback), but fortunately due to spending plenty of time up-front getting to know the story and the characters, I had 90% of it sorted after the first draft - of course, getting better at screenwriting with every new script helps, a great deal in fact, as you learn how to streamline your writing process and zoom in on exactly what you need to say to tell your story. Interestingly, the biggest change was turning one character from a male into a female, a simple change (although fiddly in terms of changing all the "he/him/his" into "she/her/her's"), but one which really gave that particular character a whole new edge and made them much richer. Ironically enough, the character's name was unisex (albeit one that is generally considered to be more female than male).

The script is 56 pages long and constitutes the first-of-three proposed episodes in the three-part post-watershed television drama serial that is Eyes In Your Window. As is the case, and as I've mentioned in past blog entries about this project, you write the first episode in-full, and then map out the remaining episodes/series arc in a document. It was great to map out the other two episodes, and even in just study card/Word Document form, it feels like a really tight story that knows exactly where it's going and has a clearly defined path to follow - just as I'd intended, and just like the visuals I saw so vividly in my head.

Speaking of vivid things, below is a brief sample (one paragraph, actually - I know, what a tease, right?) from one of the pages that illustrates just how strong the visuals were in my mind, to go along with the tight story structure.

So that's a brand new script completed - it feels good to get a fresh story under my belt - a while back I mentioned that I returned to Summer Road, now re-titled Drifting, to do a fresh re-write to bring it up-to-standard ... something which was great to do, but I was eager to crack on with an entirely new script as part of putting together a varied portfolio of script work before approaching representation (and, naturally, for the betterment of my screenwriting).

Next up I want to tackle the half hour format, and while it's great to have a whole bunch of potential ideas, it can pose it's own problem - which one do I choose? Well, there's a sci-fi drama, or a deeply dark sitcom, or a fanboy comedy/drama (there's also a couple of other ideas for drama serials, and the potential for a fresh lick of writer's paint on Allen Bridge, as well as a top-to-bottom re-write of a script I wrote a few years ago called From The Inside Out). So in other words there's a lot of screenwriting to be cracking on with! Details on whatever's next in due course...

In the meantime, jot down every idea and keep writing - oh and I wish you all a Merry Christmas/Happy Holidays and a fruitful New Year!
Posted by Nick Thomson at 17:54