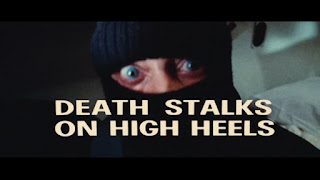 “With this razor you won't feel the pain right away, but it will leave your body covered with horrible scars.” Luciano Ercoli teamed up again with his Forbidden Photos of a Lady Above Suspicion (1970) stars Nieves Navarro (aka Susan Scott) and Simon Andreu, and giallo screenwriter extraordinaire Ernesto Gastaldi, for Death Walks On High Heels – a deeply fetishistic thriller. A strip tease artist flees Paris with a Doctor, but soon finds the quaint English countryside is nowhere near as safe as she had hoped... 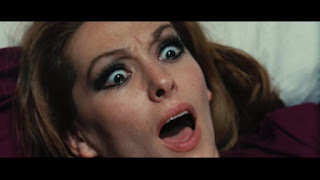 “If you don't talk, I'll kill you!” Opening on a mysterious scene aboard a sleeper train, a one-eyed man with a gun tucked into his belt answers the door expecting a porter, but instead has a knife plunged into his throat. The unknown killer, with their exceptionally blue eyes, frantically searches the room – but what are they looking for? Whatever it is, it's nowhere to be found. Meanwhile in Paris – sunshine and smiles in the city of love – Nicole (Navarro, All The Colours of the Dark) and Michel (Andreu, Death Walks At Midnight) cuddle up in the back of a car on their way to the police station. It transpires that Nicole's father was the one-eyed man on the train – and a diamond thief to boot. She pleads ignorance on the whereabouts of the stolen goods, but the Inspector warns that she may now be the next target for whoever it was that murdered her father. 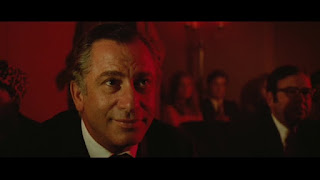 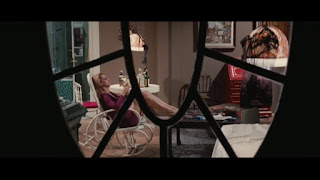 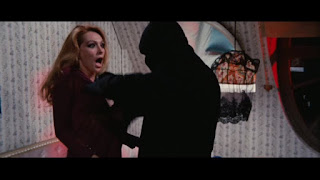 “Let's get something straight, I do a strip act but only on stage, so you'd be wasting your time with me.” Nicole and Michel may be in love in the midst of Paris' most hip locales, but she is the sole breadwinner in their relationship. Everywhere they go, his pride and shame riles him – he believes he is seen by others as a pimp and a parasite – while she endures his frequents bouts of drunken sorrow and jets from one strip tease to another in order to earn a crust. Sure enough, just as the Inspector warned, Nicole receives a call from a stranger – disguising themselves with a voice box – demanding to know where the diamonds are. That night the killer – clad in black and wielding a straight razor – attacks and menaces her in one of the film's more unsettling scenes. Suitably scared – and having found a pair of bright blue contact lenses in her bathroom – Nicole, believing Michel to be the killer, runs off with Dr Matthews (Frank Wolff), an Englishman who has taken a firm and fast fascination with her. 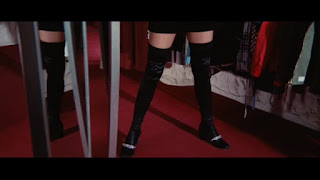 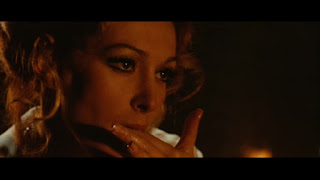 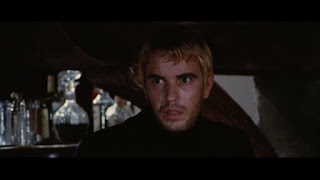 “I need to get away from Paris, and that's why I'll do anything.” Swept away to the shopping and dining hot spots of London, Nicole's self-assurance and sexual energy makes Dr Matthews swoon like a schoolboy, and so he takes her to his coastal getaway near a small village where he wastes no time introducing her to the gum-flapping locals as his wife; never mind that he's already married. However, as events spiral out of control – with murder, bribery, and kinky boots – the diamond-hungry killer stalks closer and closer. 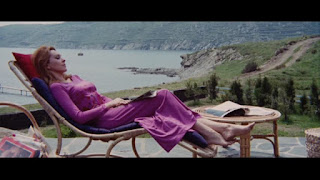 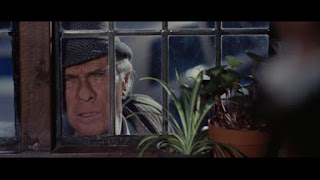 “Her body moved like a snake, she'd wriggle and writhe on the floor half-naked and then she'd go into a rhythmic motion until I thought I'd go mad every night.” Beautifully photographed by Fernando Arribas, Death Walks On High Heels is an exquisite looking picture. Each set is more elaborately decorated than the next, while the screenplay by Ernesto Gastaldi (The Case of the Scorpion's Tail) and May Velasco contorts itself into increasingly sordid knots. Conversely, there are frequent instances of curious humour throughout, such as a policeman being vomited on from on-high, to the strange relationship between the foppish Inspector Baxter (Carlo Gentili) and his young mentee Bergson (Fabrizio Moresco) – just check out those lingering eyes as one lights the other's cigarette – with one particular moment playing like a precursor to Austin Powers. The film may have a low death toll, but whenever the killer appears startling scenes of explosive violence are sure to follow. One stand-out murder set piece is surprisingly graphic, as a knife carves into flesh with remarkable relish. Arguably it is one of the most visceral moments in gialli beyond Dario Argento's high watermark for bloodthirsty spectacle. Indeed, even the occasional fist fight packs a bloody punch to rival the more lurid milestones in the grand tableau of Italian thrillers. 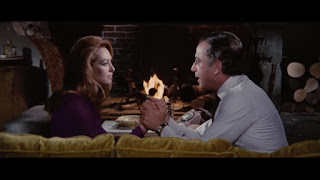 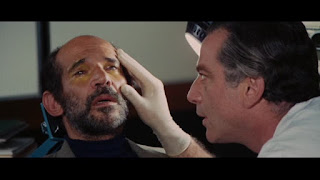 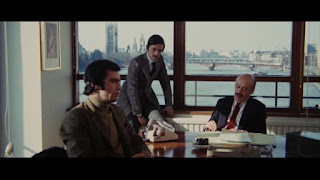 “They never pull the blinds, so everyone can see.” As it progresses, Ercoli's film becomes increasingly fetishistic. There are obvious targets, such as those above-the-knee suede boots, Navarro's body, and a none-too-subtle scene where Nicole sensuously eats fish with her fingers, but the film dives much deeper. Close ups of feet – both living and dead – mingle with audio recordings of Dr Matthews' intimate encounters with Nicole (and her boots, naturally), and that doesn't even account for all of the film's kinks! Meanwhile the seaside town is riven with gossip, providing intergenerational titillation as randy young men whisper salacious details to old ladies who are just as dirty-minded as everyone else. This quaint slice of rural Britain is struck by Nicole as if she is a sinful bolt from the blue, sent to enliven the vices bubbling under the surface. The allure of what goes on behind closed doors – viewed through a telescope or from the shadows – paints a picture of a village populated by peep show connoisseurs. Indeed, the juxtaposition of small town voyeurism and free house whispers contrasts satirically with the honest 'sex for sale' of London's Soho with all its neon signs and saucy displays. 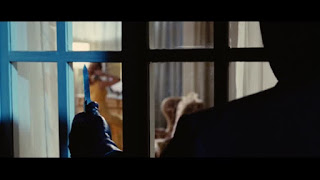 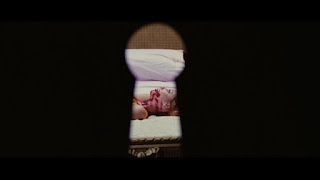 “I'm just a poor middle class sod who married just as his mother told him, and after years of a stupid, monotonous marriage, he finds the first girl he ever liked.” Considering the killer's schism between being a lover and a hater of women, Ercoli's film assumes a nature afforded to the most visceral examples of gialli. These frequent and assorted themes of fetishistic behaviour dovetail with the wider stylistic trappings of gialli as a whole. Gleaming razors in the moonlight, stiletto knives slicing through the frame, and anonymous figures dressed in black are all present and correct as the typical globe-trotting plot ebbs and flows with sexuality – both pure and complicated. As with many giallo thrillers, there is a sexual dimension to the violence, and no truer has that been than in Death Walks On High Heels. A home invasion takes on a sinister tone of sexual threat as a straight razor's dull edge traces over perfect skin on one end of the scale, while on the other Dr Matthews reveals that Nicole has awakened a sense of love and beauty within him that he never knew existed. As if the film wasn't already chock-full of themes, Gastaldi tosses in a little dose of (not necessarily literal) impotence, neglect of the heart, and marriage for money. 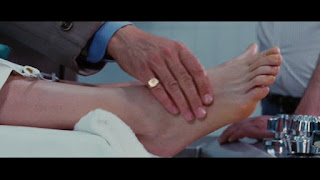 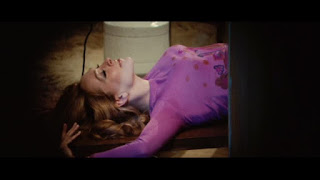 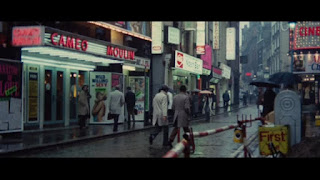 “The first time I saw you I said to myself – there, there goes something really beautiful in this world, there's something I missed.” Arrow Video's 2016 premium box set – featuring Death Walks On High Heels and Death Walks At Midnight (both in HD and SD) – is another example of the distributor's commitment to high quality releases for specialist viewing fare. Even the physical presentation of the set is gorgeous, with both Blu-Ray/DVD cases – and the lush hard-spine booklet – housed within a firm box featuring some of the wonderful newly commissioned artwork by Gilles Vranckx, who almost gives master-of-the-form Graham Humphreys a run for his money. Specifically regarding Death Walks On High Heels, the picture – preserved here in its 2.35:1 aspect ratio – is pristine, while the sound – in the original mono mix in your choice of English or Italian (with optional subtitles) – is clear throughout and only exhibits a handful of pops and clicks on rare occasions. Extras wise you get: 'From Spain with Love', a March 2012 interview with the late Luciano Ercoli and his wife Nieves Navarro, while 'Death Walks to the Beat' is an October 2015 interview with composer Stelvio Cipriani, and 'Master of Giallo' is a November 2015 interview with screenwriter Ernesto Gastaldi. The three informative pieces are all in Italian with English subtitles and come to a total of 82 minutes in length. Additionally there are two trailers and a commentary by regular Arrow chat-track contributor Tim Lucas. 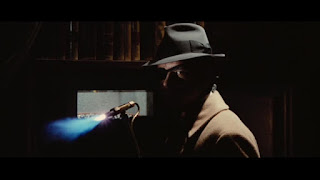 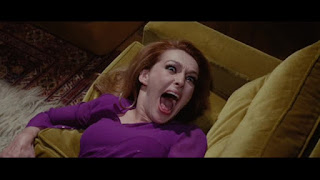 “If you're determined about anything it's bound to come out in the way you walk.” At 108 minutes in length, Ercoli's film is a bit over-long, but the regular injections of sex and violence keep Death Walks On High Heels a spirited example of the Italian thrillers that were so prevalent in the early 1970s. Nieves Navarro is afforded a strong part to play, mixing intimate allure with forthright assurance, and despite one or two predictable elements, the screenplay manages to muddy the waters with enough red herrings to keep the viewer satisfied. Indeed, one particular plot point stands as an unusual twist on audience expectations – but that shall remain a secret here. Visually sumptuous, and scored by the talented Stelvio Cipriani (What Have They Done To Your Daughters?), Luciano Ercoli's second giallo venture is a gorgeous piece of cinema bolstered by an impressive cast who cover the gamut from sinister to sexy to oddball. Recommended viewing for fans of the genre.

N.B. Screenshots are taken from the DVD copy of the film.
Posted by Nick Thomson at 19:23