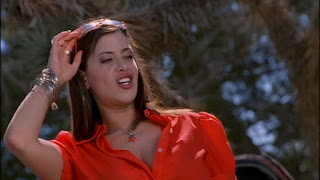 “I'm like a French bread – the longer I'm around, the harder I get.” In his heyday of the 1960s and 1970s, Russ Meyer was the king of the American sexploitation film. Voluptuous women bouncing and bonking around the desert, crazy characters chewing the scenery, and a scatter gun editing style that pre-dated music videos by many-a-year provided a heady mix for audiences. However, in the age of super fast broadband, such softcore silliness is positively tame – but Director Jonathan Yudis and Writer Mike Davis buck reality to combine their Meyer nostalgia, and fondness of the female form, for Pervert! – a whacked-out 'n saucy dose of jiggly boobs, dutch angles, and heat-driven madness... 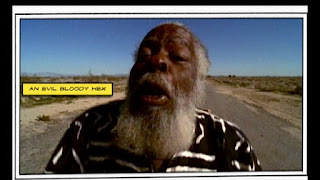 “Something marvellous must have happened in my garden overnight – they've shot up over six inches!” James (Sean Andrews), returns from college to spend the summer working on his father's desert ranch and learn how to be a man. Not one with the ladies – a disgusted hitchhiker gets out and walks when his smut stash spills from the glove box – James quickly finds himself goggle-eyed by his father's new woman Cheryl (Mary Carey). Hezekiah (Darrell Sandeen) may be an old man, but he porks like a college kid hopped up on boner pills – something which drives his son James to distraction. 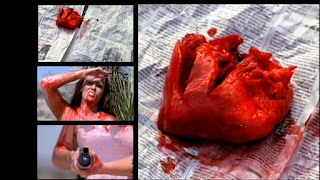 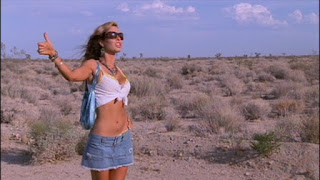 “Well, what d'ya know – it's a cherry!” Naturally, this being a movie inspired by the filmography of Russ Meyer, James soon gets lucky – repeatedly – behind his father's back, but when Cheryl mysteriously goes missing he can't help but suspect foul play. Hardly surprising, when Hezekiah's hobby is hacking up meat and making vaguely feminine sculptures out of the pieces, but the loss of another one of his buxom babes makes things a little less clear. 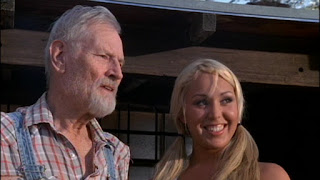 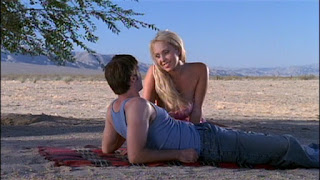 “I'm like an egg, hard on the outside, but if you prick my yoke in just the right spot I'll gush all over you.” Hewing close to the Meyer mold – split screens, low angles, tilted cameras, disjointed editing, jaunty music, random cutaways, and cartoonish sound effects (sloshing water for Cheryl's bumpy truck ride through the desert) – the movie wears its influences loud and proud on its sleeve. Subtlety – quite justifiably – was never on the menu, here. However, norks 'n naughtiness (of which there is plenty) can only get you so far, likewise with the convincing resurrection of Russ Meyer's presentational style, as things begin to peter out about half-way through. 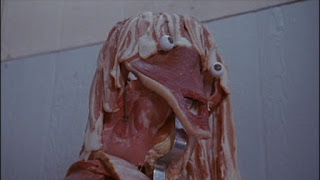 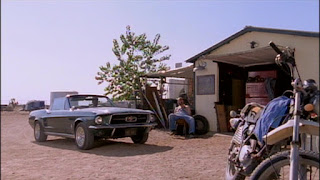 “You better watch your ass, ya hear? 'Cos I'm gonna be watching it nice and close.” Despite clocking in at a brief 75 minutes before the credits roll, the momentum of the flick begins to sputter as the sparse plot strays into weirder territory. The twist is goofy and adds to the overall trashy nature of the movie, but the constraints of a $50,000 budget and tough twelve-day shooting schedule reveal some cracks. There are some fantastic lines of dialogue, but events are never quite funny enough for Pervert! to be a comedy. There's copious amounts of flesh, but the muck never quite escalates it to the realm of full-bore sexploitation. There's a fair amount of blood splashed around, but not enough to justify it as a gore/horror flick. As a result, Yudis' film sits awkwardly somewhere between the three. 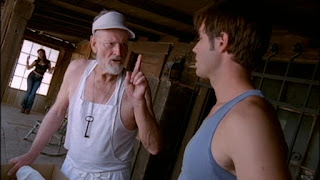 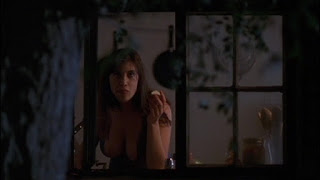 “Like psycho like son, I suppose.” Scrappy and cheeky, for the most part it works, but set expectations low. Initially received with a rather mixed reaction – fans of Meyer's oeuvre found fun, while those with sniffier tastes saw no purpose in what they wrote off as smut – Yudis' movie clearly comes from a place of nostalgia. Films like Russ Meyer's Supervixens provided an American take on what the Europeans were doing very well during the exploitation cinema boom, but in the 21st Century Pervert's distinction between homage and spoof seems muddled, with the film generally feeling out-of-time. Undoubtedly it has come and gone as a mystery to many, and will continue to do so, but to those who enjoy this kind of fare there's enough to warrant a viewing. If you don't giggle at the sight of a chesty lady plucking a comically large bee's nest off a tree in order to douse her assets in honey, or butter a corn cob in a rather unconventional manner, then this movie ain't for you. 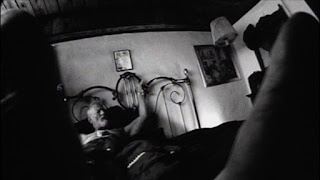 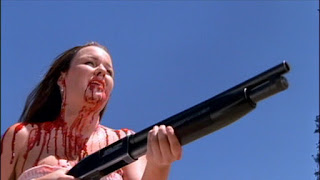 “Sounds like quite a load!” Arrow Video's 2011 DVD release comes with the standard collector's booklet and reversible sleeve, as well as a variety of so-so extras. A handful of deleted scenes, bloopers, trailers, audio commentaries, and pictures form the bulk, while a thirty minute making of sheds a little light on what was evidently a physically demanding shoot, but one which was endured by dedicated filmmakers. Evidently in recent years Arrow Video have outgrown such releases, aiming to go for the real deal and treat them with a loving – and even academically detailed – caress, but wherever you may end up, there's always room for some present day throwback 'lust in the dust'.
Posted by Nick Thomson at 17:49