The Green Inferno: a quick review... 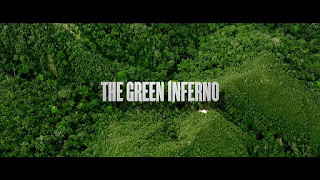 What's it about?
Hashtag protesters, e-petition fans, virtue signallers, self-righteous imperialists of opinion, and slacktivists alike - prepare to be offended, and then eaten! A group of student activists rush off to Peru in order to stop the bulldozing of a section of the Amazon rain forest, but when their plane crash lands they find themselves held captive by the native tribe they were attempting to help...
Who would I recognise in it?
Lorenzo Izzo, Daryl Sabara, Richard Burgi, Ignacia Allamand.
Great/Good/Alright/Shite?
Delayed after the original distributor suffered financial woes, Eli Roth's return to feature films - a love letter to Ruggero Deodato's "Cannibal Holocaust" (Roth's favourite flick) - had a lot of expectation chasing it. Journeying deeper into the rain forest than any other filmmakers thus far, TGI has a sense of adventure that is impressive, no doubt inspired by Roth's admiration for all those Italian directors who braved the wilds of the jungle to conjure up increasingly twisted cannibal movies in the 1970s and 80s. 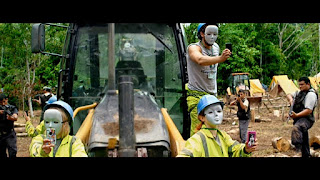 Taking aim at the social media driven culture of 'hashtag protesting' and general 'slacktivism' (publicly showing how much you care about any trending socio-political issue, while investing the least amount of time, energy, or even consideration into the cause), Roth's film certainly doesn't lack bite...

Click "READ MORE" below to continue the review...
Perhaps this is part of the reason why the film has received such a mixed response. Unfairly decried by cine-illiterate mouth pieces as being offensive to tribal culture, you need only take a passing glance at any interview with Roth about the film to know what he cares about and what his intentions were. He expressed a love of the actual tribe who were cast in the film - and a dislike for the production-bothering Christian missionaries imposing their God upon them. The tribe - having not known what a film was - were shown "Cannibal Holocaust" as an example and burst into uproarious laughter, considering it a comedy. Indeed, the fictional tribe in the film believe the students to be their enemy because that's how they're dressed (the same high-vis overalls as the workers)! If they'd been otherwise attired, might they have enjoyed a kinder fate? 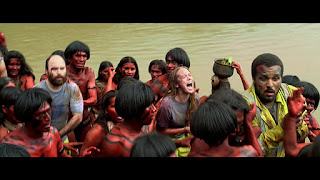 The protesters in the film are divided between people who truly want to help (while also asking fair questions and mindful of context, and perhaps bowed by more aggressive personalities) and those who are only in it for themselves (for glory, to make themselves look good on social media, and to massage their inflated sense of self-importance). Protest isn't condemned in its entirety, just specifically the new Internet-infused version of it - the perceived human right to be offended and shut down alternative opinions, the cult of leadership (think the Kony 2012 campaign), and so on. Similarly, the industrial encroachment on the rain forest is damned - the militia protecting the bulldozers are all amoral guns-for-hire. But then again, Roth's work has previously been misread - the Hostel films were dismissed by the harshest critics (flinging "torture porn" around in abundance like a slacktivist spews out the term "hashtag") as supportive of American ignorance of foreign lands, when they're nothing of the sort. Roth specifically sought to skewer the segment of backpackers who disrespect the places they visit and assume they can do whatever they please, treating the residents like objects for their pleasure or mockery. 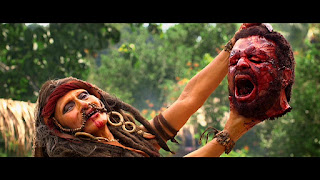 Criticism aside (might some hate a Roth film just for the sake of it?), The Green Inferno is smart enough to discuss the reach - and rights - of Western thinking on foreign cultures. We may find certain practices abhorrent, and could very well be entirely justified in our opinion, but does that give us the right to force our will on others? The irony of misguided critics slamming Roth for imperialist thinking is delicious. Suffice it to say, there are few clear answers offered, but there are a multitude of morally complex questions proffered beneath all the limb-severing violence. 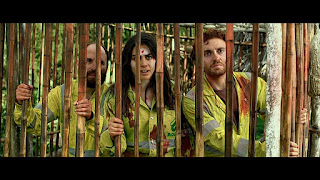 Speaking of which, being a cannibal flick, there's gore aplenty. The effects are well-crafted magic tricks of gruesome blood gushing mayhem, but they do lack the visceral shock and awe impact of Deodato's gritty 'cannibal-film-to-end-all-cannibal-films'. The rough-and-ready documentary aesthetic of "Cannibal Holocaust" makes it as powerful today as it was 36 years ago, whereas TGI is far more slick and movie-like. Acting wise, it's a mixed bag. Izzo works well, enduring a tough shoot, and runs the gamut of emotions - but the scenes with her college room-mate tend to be clunky and underdeveloped. When it comes to the characters, while it initially appears not to be the case, there are several people to root for. Naturally, Izzo is chief among them, and an early twist to proceedings quickly lays down a dividing line between the goodies and the baddies. 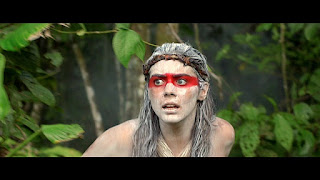 Visually the film is rich, with lush greens and reds brought to the fore, but the cinematography at times leaves something to be desired. Some scenes look dreadfully digital, making the film look cheap and rushed at times, and overall The Green Inferno lacks the grand visual strength of, say, Hostel II. Indeed, the film proves to be an imperfect outing from Roth. The Green Inferno, and the more recent Knock Knock, suggest that Roth needs to take a little more time with scripting and characterisation, perhaps even a little more rehearsal time as well, to develop and clarify certain themes. That said, TGI decidedly delivers and leaves a better impression than the somewhat uneven Knock Knock. The story is strong, you actually have several people to root for (compared to not one sausage in Knock Knock), and it successfully combines an appreciation for a little-respected period in Italian exploitation cinema history with a commentary on 21st Century political discourse. Biting satire meets flesh-munching violence - I'll have another helping, please. Good.
Posted by Nick Thomson at 17:37