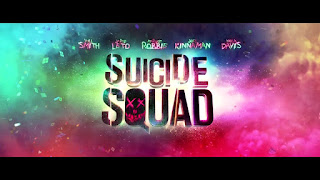 What's it about?
Following on from the events of Batman V Superman: Dawn of Justice, the government approves a plan to weaponise a rogues gallery of villains and meta-humans to provide a counterstrike to powerful potential enemies. Kept in-line by explosive implants injected into their necks, the ragtag bunch of bad guys take on the badder bad guys in David Ayer's (Fury, End of Watch) riposte to Guardians of the Galaxy and Marvel's propensity for goody-two-shoes.
Who would I recognise in it?
Will Smith, Margot Robbie, Jared Leto, Joel Kinnaman, Ben Affleck, Cara Delevingne, Jai Coutney, Jay Hernandez, Viola Davis, Adewale Akinnuoye-Agbaje, Ike Barinholtz, Scott Eastwood, and more. 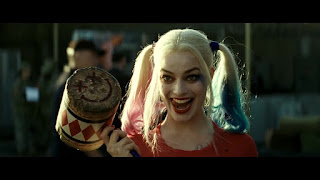 Great/Good/Alright/Shite?
Let's get something dealt with right off the bat, shall we? The backlash from professional critics (a loose term, so it seems, from a scan of Rotten Tomatoes) has been negative to the nth degree. Overblown would be one way to put it, asinine would be another, desperate for clicks and web traffic and attention would be yet another. Frankly, the whole charade - started with the film crit armageddon that faced Batman V Superman - draws film criticism into disrepute. Each snarky thumbs down seems to be trying to say something more preposterously over-the-top than what came before, rather than tackling the film in a fair and sensible manner. Some of the sheer and unbridled hatred that has been levelled at Suicide Squad is nothing short of downright silly, and completely clouds legitimate critiques (observations that might prove useful to Warner Bros, David Ayer, et al in the future) and makes the whole thing look like an utter farce...

To be quite honest, it smacks of a deliberate narrative - a ploy to lure the curious cats of the web to click on some outrageous title and waft some advertisements under their noses. In these last few days, if it hasn't been about something extraordinarily nasty written about the film, it's been about its impressive box office takings straight out of the gate - a see-saw frenzy of clickbait with ever-spiralling sums of cash quoted for the film to "break even". (I should note that I find the marketing costs, particularly in this day-and-age of social media word-of-mouth, to be obscene). Indeed, so extreme has the backlash been that it has inevitably led to an equally bizarre response from angry fans signing a petition calling for the closure of Rotten Tomatoes. This has all become nonsense. Everyone needs to calm down ... but that wouldn't get so many clicks and shares, would it? What's more, in the 'Marvel rocks, DC sucks' train of collective thought, it seems to have been forgotten that Marvel (with as many justified successes as they've had) have, on occasion, stumbled. Iron Man 2 struggles to follow the superb Iron Man. Then there's Thor: The Dark World, which was disappointingly forgettable. Even Joss Whedon was disappointed with Avengers: Age of Ultron, a thoroughly fun but less focused follow up to the rip-roaring Avengers Assemble. Then there's Ant Man - an enormous amount of fun - but its villain is perhaps the weakest of them all for quite some time. But then conversely you get near-perfect entries like Guardians of the Galaxy, or Captain America: The Winter Soldier. 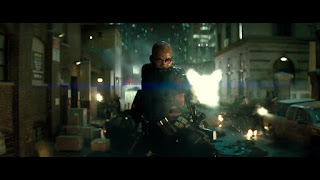 Yes, DC's attempt at Green Lantern fell flat on its face (and is the butt of more than one joke in the terrific Deadpool), but Man of Steel - imperfect and overly-moody as it was - was a solid outing and certainly a significant improvement over Superman Returns. But what about Suicide Squad? Let's not stray from the topic at hand any further. 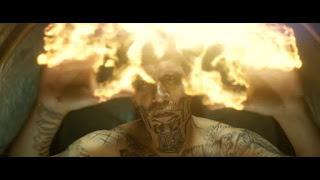 Much like Batman V Superman, Warner Bros & DC's latest superhero outing has a great deal of responsibility on its shoulders. Struggling to catch up in record time to Marvel (whose Cinematic Universe kicked off in 2008 and is now in its "third phase"), Suicide Squad's biggest problem is a lack of focus. However, the problem is less pronounced than in Batman V Superman, which had to 1) Be a sequel to Man of Steel, 2) Be a re-introduction to (an older, grumpier) Batman in the wake of Christopher Nolan's hugely successful Dark Knight trilogy, 3) Be the beginning-in-earnest of the entire Justice League and DC Expanded Universe (Man of Steel aside), and 4) Be a 'Versus movie'. Thankfully, Suicide Squad doesn't have anywhere near as much to deal with, and it is able to build upon what BvS set up earlier this year, but its focus problems derive, ironically enough, from its main strength - it's cast of rogues. 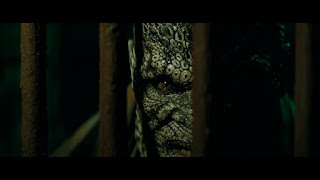 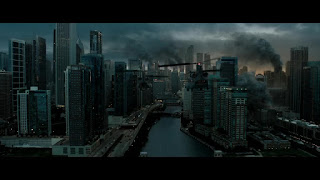 Kudos to Ayer and Warner Bros for combining well-known and lesser-known characters. Mainstream audiences are well aware of The Joker (props to Leto for taking on the challenge of trying to break away from the shadow of Heath Ledger's 'Joker of a Generation'), and have a working idea of Harley Quinn, but Killer Croc? Rick Flag? Katana? Captain Boomerang? Mainstream cinema-goers are clueless about them (and I'm not really in-the-know either). The new range of characters is a bold move and a welcome one, much like with Guardians of the Galaxy, but setting them all up and bringing them all together as a cohesive unit inside two hours is a Herculean task. 'Villains: Assemble', if you will, is an imperfect thing, but for the most part it works. 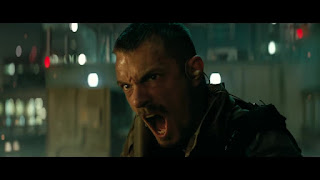 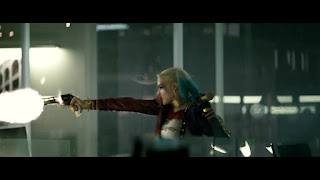 Speaking of that vast roster of characters, the film's key asset turns out to be Margot Robbie's Harley Quinn - like a porcelain doll with twisted tendencies, she commands awe and a wary sense of respect from all-comers. Did you think she might be a bit annoying from those disembodied clips you saw on YouTube? Never fear, her playful charm proves to be the film's funny bone and, surprisingly, a good portion of its heart. Combined with Will Smith's Deadshot, these two provide the film's more heartfelt moments. Deadshot is a failed father and assassin-for-hire desperate to reunite with his daughter, while Harley Quinn see-saws with her inner demons. Is she just The Joker's plaything? Is the love that she and 'Mistah J' share merely a veil for an abusive relationship? What does she want out of this new life of hers that she has come to accept and, most importantly, own? 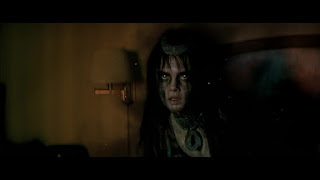 The other characters have their moments, some more than others, but a few - such as Katana - tend to get lost in the shuffle. What doesn't work quite so well is the 'badder baddies' of the piece. They have a goal, and it's a simple one - to be Gods over mankind - but their lack of screen time impacts their level of menace. And, well, 'Brother' is a bit of a CGI damp squib, and - as in most superhero films - the climax comes swamped with effects. 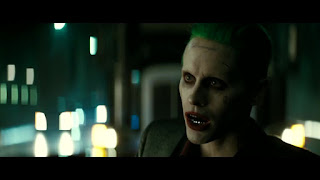 For all the sense of anarchy, the bad guys are ostensibly the good guys. They might have done bad things in their back stories, but for the most part they are cast as victims of circumstance or do things easily excused by the audience. Their initial bark dwindles gradually, even if their snarky charm stays strong. The soundtrack is a good metaphor for the film as a whole in some ways - eclectic, yet safe enough to avoid alienating the audience. Might Warner Bros have fiddled with the edit after gripes about BvS' frosty demeanour? It's possible (remember that ludicrous diktat pre-BvS that 'no DC movie will have jokes in it'?), but even the first trailer showed that Suicide Squad was going to be a more raucous and entertaining affair - and it has achieved that. Flaws aside, it's a fun time. It's not as daring as it thinks it is, but in other regards there's a satisfying snarl - a mean streak - that tantalises. 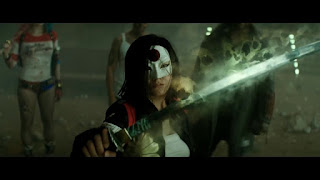 Interestingly, after the bizarre case of Batman v Superman's extended cut jumping from PG-13 to R in America while remaining (without cuts) a 12 in the UK, Suicide Squad (a hard PG-13 in the USA) slides in with a relatively soft 15 here in Blighty (it must have been down to all those 'frog spawn zombie' decapitations and general thirst for gunplay). 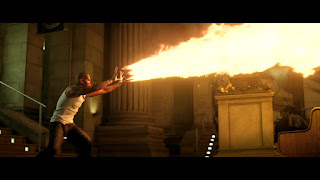 By no means perfect (it's a solid 7/10, if you want a number), Suicide Squad simply doesn't deserve the drubbing it has received from critics. There are some genuine criticisms to be levelled at it (the script needed more work to tidy it all up and fill-in some holes, for one), but the cacophony of bile thrown in its direction - bordering on hysterical - is uncalled for. Will Wonder Woman be judged so harshly come 2017? I'd be surprised if it was. (Incidentally, the debut trailer looks pretty darn cool). In-need of focus, stronger plotting, and a little more confidence in its anarchic intentions, Suicide Squad is nonetheless an exquisitely designed and colourful explosion, like a punch in the jaw with a glittery fist. It may be a bit messy and weighed down with responsibility, but it makes for frantic - if fragile - fun. Good.
Posted by Nick Thomson at 11:42