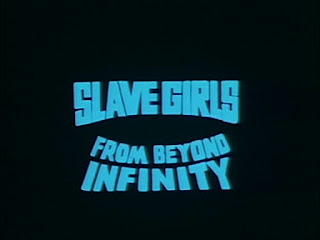 “Big Movie. Big production. Big girls.” In space no-one can hear you scream … but there's plenty of hairspray! Let's be honest, can you ever live up to audience expectations with a title like that? Once slammed as “indecent” by a U.S. Senator, Ken (Zombiethon) Dixon's $90,000 VHS-era exploitationer isn't shy about coming forward. A cheap and cheerful sci-fi adventure flick, with a cast who spend most of the movie either in ragged bikinis or skimpy lingerie, Slave Girls From Beyond Infinity isn't aiming for P.C. Plaudits in the slightest – it just wants to give you a fun time. Think along the lines of Sorority House Massacre 2 – and set your expectations accordingly... 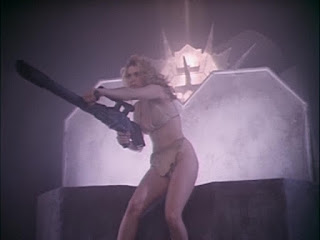 “Now the bars keep the dangers of the jungle out.” Opening in a jungle cast under the shadow of night, a woman in a bikini (that wouldn't look out of place in 1,000,000 Years B.C.) halts, wraps her arms around herself, and boosts her ample attributes towards the camera. Suffice it to say, this ain't high art – this is fodder for a generation weaned on Playboy and 42nd Street. Then, lumbering out of the foliage, a phantazoid warrior – a sort of hunchback lizard/cyborg hybrid with a laser gun for an arm – threatens to slay her where she stands until a dark and mysterious man with a laser crossbow saves her life. But who is this stranger, his face hidden by the shadows? What are his intentions? 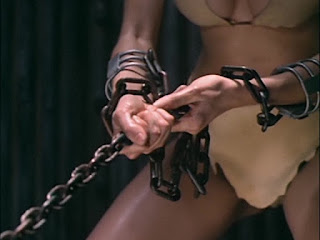 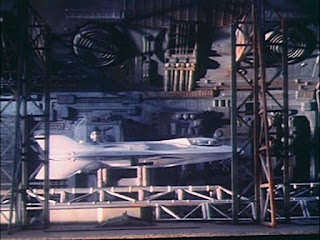 “I've got an idea – that if we can reverse the polarity on these cuffs, the only thing standing between us and freedom is stealing a starship.” Elsewhere in the nearby galaxy, locked away in a slave cell aboard a dark and dingy space craft, two similarly attired young women strain against their chains. However, Daria (Elizabeth Kaitan, Friday the 13th Part VII: The New Blood) has other plans – and promptly breaks her chains with sheer brute force. Helping her cell mate Tisa (Cindy Beal) bust out of her shackles, the duo stage a daring escape – battering two horny guards on their way – and make off with one of the ship's light craft. 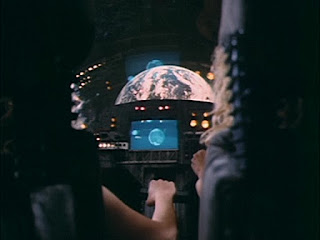 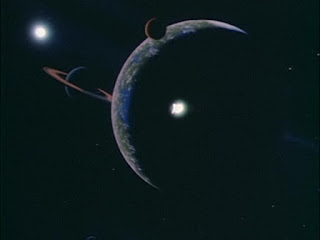 “The only chance we've got is no chance at all.” Unfortunately for them they don't get far before their escape ship is dragged down onto the surface of a strange planet. After the crash, Daria awakens, washed up on a mysterious beach being patrolled by an android – where the hell is she? But more importantly, what has become of Tisa? Venturing further in-land – through a dense jungle – Daria finds an ancient structure, like a mix between an Aztec temple and an Arthurian castle. Inside she finds a grand dining hall, the walls covered with various alien beasts – mounted as hunting trophies. What dangers lurk in here? 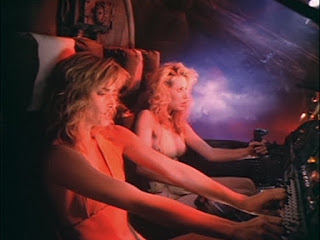 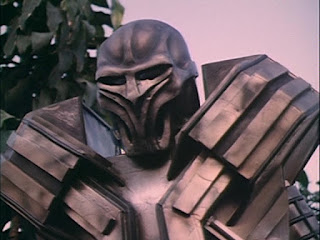 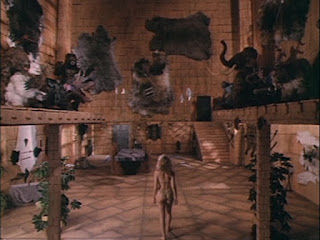 “Hunt first the enemy, then the woman.” As it transpires, this place – once abandoned by the space pirates who built it (that this was said with a straight face is a marvel in itself) – is the home of Zed (Don Scribner). Welcomed with open arms, Daria is reunited with Tisa – now dressed in a flowing black gown – and is invited to dinner with the other guests that Zed is entertaining. Rik (Carl Horner) and Shala (Brinke Stevens, Sorority Babes in the Slimeball Bowl-o-Rama) seem at ease, but when Rik pulls Daria aside and informs them that two of their own friends have gone missing, Zed's penchant for night hunting becomes sinister. Indeed, when Rik's sister Shala goes missing, it's up to them to evade the android guards, brave the deadly perils of the jungle, and figure out what's going on before its too late. 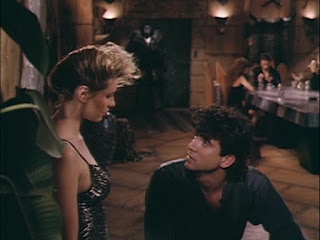 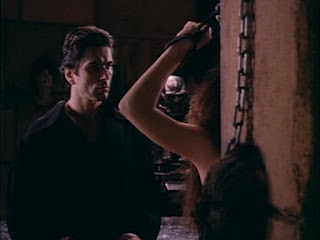 “I'd feel a whole lot safer with a big, strong android like you along to protect me … of course, I haven't got a swimsuit, but I'm sure you won't mind.” Silly in a good way – there seems to be an abundance of lingerie on this planet, yet no footwear to speak of – Slave Girls From Beyond Infinity never once takes itself too seriously (or seriously at all). Some awkward mouthfuls of expository dialogue aside, which come far more frequently than bared flesh, Ken Dixon's film just wants to have fun. From the brotherly bickering of androids Vak and Krel, to the charming low-fi model shots and matte paintings, its vibe of throwaway trashiness proves gleefully entertaining. 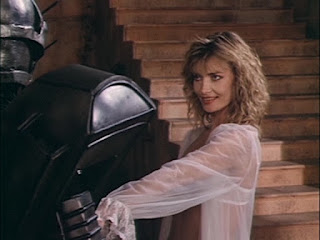 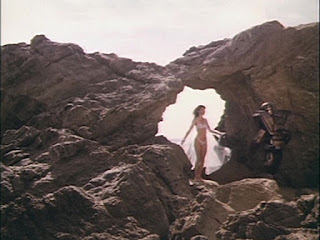 “I've always found the female of the species to be the greatest challenge, far more crafty and cunning than their male counterparts. They're devious, unpredictable – full of surprises.” Suffice it to say, Oscar-winning performances are not on offer here. And yet, Kaitan and Beal gamely contend with the clunky dialogue (“We're cooking with atomic induction!”, “Super-sonic psycussion – that's the answer!”), while Scribner seems to channel from the future the facial expressions of Christian Bale in American Psycho. 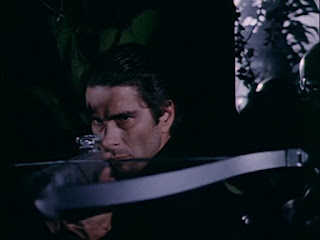 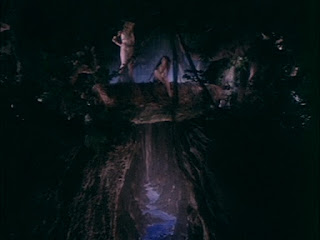 “I could say something rude, but I won't.” In this day and age of the easily offended, such a film could be seen as a crass relic of the recent past, but – flashy title included – Slave Girls From Beyond Infinity has its cake and eats it too. Sure, the ladies wear next-to-nothing, but they also brave 'the Phantom Zone' where the laws of time and space no longer apply and come out on the other side with giant laser rifles, shooting from the hip and taking on all-comers – mutant zombies, phantazoid warriors, conflicted androids, and owners of skull thrones alike. Indeed, while Daria and Tisa might not have the best luck in the galaxy, their can-do attitude is infectious and their smarts allow them to pull off bold moves against their captors. Good or bad, the male characters are all easily manipulated and live according to mere base urges – violence and carnality - dopey lovers or sadistic fighters. It's about as far from a poster child for 21st Century feminism as you could get, but beneath the flick's blunt intentions it means no harm. It is a mix of power fantasy and salacious frivolity that is not for taking seriously. Considering the crazy title, to ever take it seriously – and, blimey, be offended by it – would say far more about you than it. 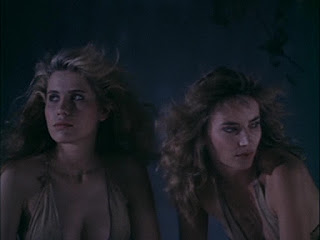 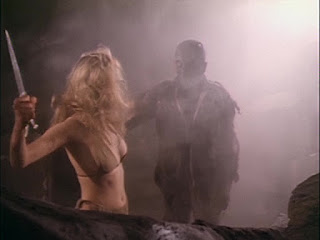 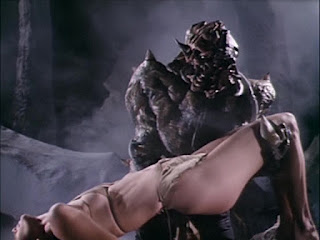 “I wonder what else is walking, crawling, or slithering out there.” 88 Films' DVD (formerly of the Grindhouse Collection, now of the Cult Cinema Collection) comes with a stills gallery, original trailer, Full Moon Trailer Park, and a bonus film – Famous T&A (1981). Hosted by Sybil Danning, it's a 74-minute selection of steamy scenes by known names before they were known. Ripped from a VHS, it does what it says on the tin, showing birthday suit scenes (e.g. Ursula Andress in Mountain of the Cannibal God), unedited raw footage, and Russ Meyer-esque musical montages – in a similar vein to Zombiethon. This is what the world looked like before the World Wide Web. When it comes to the main feature, picture and Audio quality are pretty standard – stereo sound, and 4:3 picture – it's clean, but occasional softness renders it unspectacularly average-looking. 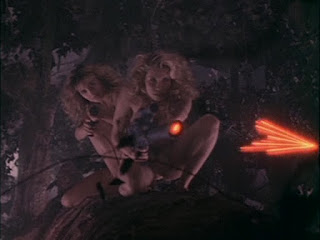 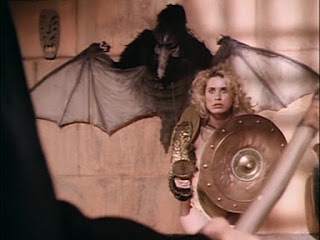 “What you need is some stimulation and some interesting company. I can promise you both.” Much like Bloodsucking Pharaohs in Pittsburgh (also in 88 Films' Cult Cinema Collection), Slave Girls From Beyond Infinity has a title that's too good to fully live up to. However, both have their own crazed charm and skewed sense of fun, delivering just enough skin, just enough laughs, and just enough spectacle to justify their alluring upfront selling power. Sliding in with a running time as skimpy as the bikinis and negligee seen from the get go (71 minutes, but closer to 65 minutes when you take out the extraordinarily slow-scrolling credits), the Slave Girls get in and out of trouble quick. Like its corny dialogue, the film is amusing for intentional and unintentional reasons simultaneously. It's a cheesy blast of goof ball silliness calling from the era of video rental stores and gaudy cover art – and on this occasion the artwork actually is accurate.
Posted by Nick Thomson at 17:27