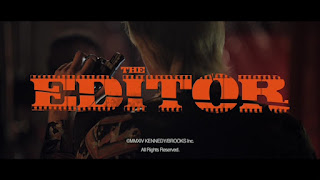 “Don't worry, we'll catch the killer that killed her.” Canadian film-making collective Astron-6 (Father's Day) return with their own curious take on the Italian genre films of the 1970s and 1980s, particularly the giallo film, with The Editor. Harnessing the bold colour splashes of Mario Bava, the shock gore geysers of Lucio Fulci, and the twisted narrative mystery of gialli icons Dario Argento and Ernesto Gastaldi, Astron-6 have donned black leather gloves and some impressively luxuriant moustaches for their own eroticised killer thriller... 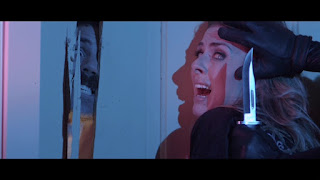 “I'll be keeping my eye on all of you, everyone's a suspect so I don't advise any of you to trust one another until I've found the guilty party.” Rey Ciso (Adam Brooks) is a film editor, a great one, but after losing the fingers from one of his hands in a grisly accident (now replaced by wooden digits) he's found himself chopping together cheap, pulpy trash for sleazy studio boss Francesco Mancini (Kevin Anderson). A wounded, tortured genius, Rey is forced to endure the pity and mockery of his peers such as that of actors Claudio (Brett Donahue) and Veronica (Tristan Risk) who flaunt their love affair in front of him. Even at home, Rey is humiliated by his wife Josephine (Paz de la Huerta, Boardwalk Empire) whose lustful gaze wanders from one of Mancini's hunky actors to the next. 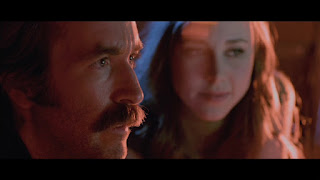 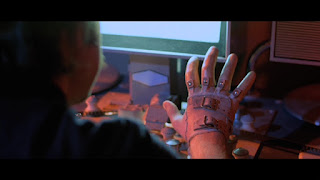 “I've heard these old studios have ghosts, and I'll be damned if I let myself see one.” Then the killing starts – of course it does – as a sex scene becomes a crime scene. Gratuitous nudity gives way to eruptions of arterial spray as a razor-wielding maniac kicks off their marathon of murder and mayhem. Indeed, so grisly are the crimes that fellow actor Margarit (Sheila E. Campbell) is blinded by the horror of it all, spurring her husband, Inspector Peter Porfiry (Matthew Kennedy), into action – but he's an unhinged rogue with strange sexual perversions of his own and an obsession with Rey Ciso as his number one suspect. 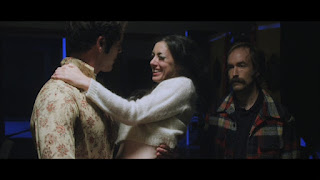 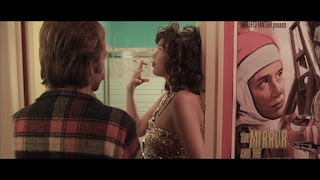 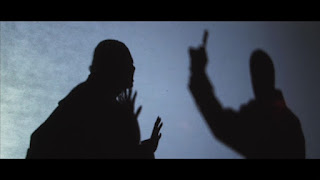 “You're like Van Gogh with his wooden ear.” But with suspects everywhere we turn, like Conor Sweeney's Cal Konitz – a sexually confused knife enthusiast with a carnivorous career plan – and the victims found with their fingers cut off, will Rey be caught as a killer or suffer as a victim? Featuring game support from Udo Kier (Mark of the Devil) as Dr Casini – from Rey's former mental asylum – and Laurence R. Harvey (Human Centipede II) as Father Clarke – a true believer in Rey's innocence and a netherworld that only film editors can access – The Editor, like all the best gialli, throws plenty of possibilities at the wall. 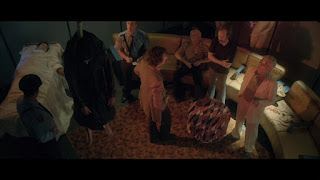 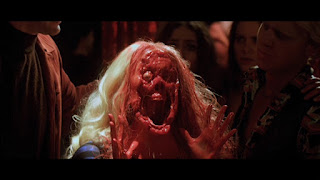 “A woman's eyes weren't meant to see such things, understand?” Dario Argento has spoken of preferring to kill women over men in his movies because it's simultaneously more horrifying and more beautiful, and yet at a time when society beyond the silver screen was almost exclusively a man's world, gialli put women front and centre as protagonists, victims, and killers alike. Yet the Italian thrillers of the 1960s through 1980s have at times been accused of misogyny (although “sexism” or “chauvinism” would be more accurate descriptors in such instances), so Astron-6 use this as a running gag. Inspector Porfiry's sordid encounters with women recall memorable scenes from The Strange Vice of Mrs Wardh (Sergio Martino, 1971), but lampoon them with sploshing and the off-putting gaze of Margarit's seeing-eye dog. Meanwhile, his penchant for slapping anyone vaguely female shows up the preposterousness of male arrogance, as the film's knowing obsession with frequent nudity is a hilarious case of having your cake and eating it too. 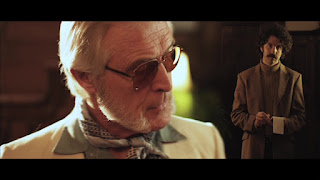 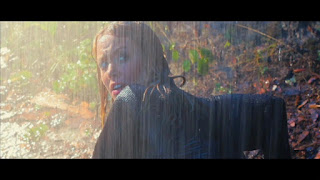 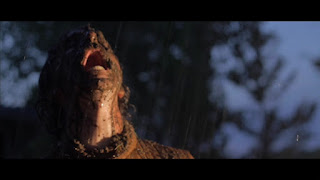 “Damn, that's right, I forgot I don't have fingers on this hand any more.” When it comes to blood and guts, The Editor lives up to Astron-6's reputation for gleefully splashing about buckets of low budget – yet decidedly effective – gore. Highlights include a chainsaw murder that references the infamous bedroom double-kill in A Bay of Blood (Mario Bava, 1971), and a barmy 'face ripping' sequence for the film-within-a-film that Rey is reluctantly cutting together. 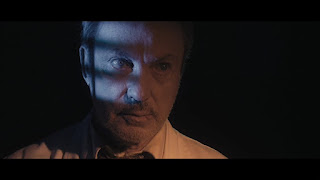 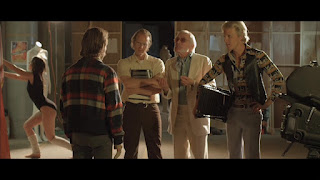 What's more, film fans will enjoy the sheer volume of nods and winks to the Italian genre masterpieces of the time period. Lucio Fulci's The Beyond and The House by the Cemetery (both 1981) are heavily referenced in connection to Margarit's character, while Blood and Black Lace (Mario Bava, 1964), The Black Belly of the Tarantula (Paolo Cavara 1971), Torso (Sergio Martino, 1973), Death Walks On High Heels (Luciano Ercoli 1971), What Have They Done To Your Daughters (Massimo Dallamano, 1974) Videodrome (David Cronenberg, 1983), Raiders of the Lost Ark (Steven Spielberg, 1981), and From Beyond (Stuart Gordon, 1986) – among others – are all explicitly given a nod. 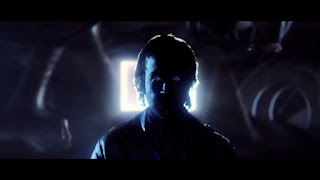 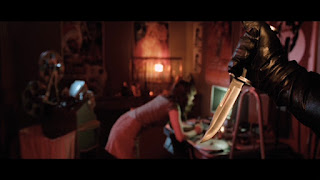 “I don't want to hear your Wizard speak!” The biggest victories that The Editor experiences are in its presentation. The film looks and sounds fantastic with the Astron-6 team taking full advantage of the opportunity to illuminate widescreen scenes in bold and brash primary colours, re-dub their own dialogue, smoke up a storm, and score their creation with a synthwave soundtrack. Their main weakness, on the other hand, is narrative focus and consistent pacing – the second act becomes flabby around the edges, while Astron-6's very specific brand of humour can stumble as often as it soars. That said, many gialli weren't exactly the height of storytelling clarity or vision – but for a 'neo-giallo' (see also Yellow, Amer, and The Strange Colour of Your Body's Tears) a little more focus in the script wouldn't have gone amiss. 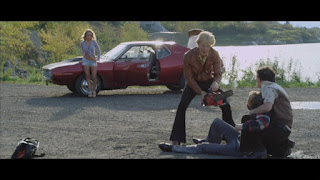 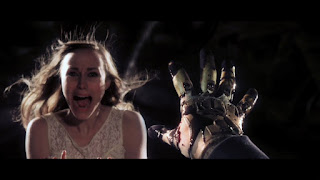 “A man slapping a man – imagine that … have a wonderful evening.” The odd wobble aside, The Editor (Directed by Adam Brooks and Matthew Kennedy) proves to be Astron-6's best film yet. Established fans of their work will know what to expect and are likely to leave satisfied. Random viewers – especially if they have no knowledge of the gialli movement – will perhaps struggle to enjoy all the different layers that the film has to it. However, if you liked this, you might want to check out Evil Ed – not that it's particularly similar to The Editor, but it does share some common ground (and is a jolly good horror comedy to boot). Genre fans will appreciate the copious amount of sex and slaughter that's on offer, and get a kick out of pinpointing the vast array of cinematic influences the film boasts. If you enjoyed Father's Day and wanted to know what they could do with a bigger budget, here's what you get – even if, as revealed in the making-of documentary, the bulk of production was done under similar circumstances – a blood-soaked, boob-filled, loving homage/spoof to an entire era of filmmaking that's very much worth your time. Check it out. 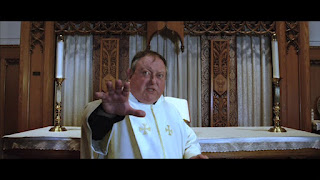 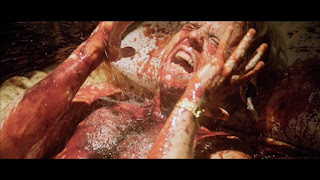 “Honey, I'm in our home.” You wait and you wait for a UK release, no word of one crosses the film's Facebook page, and then you look to see – by random chance – if it's at least up for pre-order only to find it was released, to no fanfare whatsoever, months prior! At long last, Astron-6's latest cinematic cocktail of quirky humour and genre delights comes to Blighty via Monster Pictures (who have also distributed the likes of The ABCs of Death 1 & 2) – but only on DVD! So British fans of Blu-Ray will have to mutter to themselves or import the American release. Still, the audio/visual presentation is good, bolstering the already strong palette of primary colour hues splashed throughout the film. Thankfully, the extra features haven't been forgotten about – there's an audio commentary with Astron-6, a selection of deleted scenes and typically oddball interviews, a festival intro video, reversible cover art, and (best of all) a 51-minute making of documentary that is informative, revealing, and entertaining.
Posted by Nick Thomson at 17:10