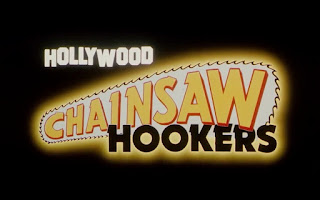 “What's the matter, chainsaw got your tongue?” Shot in five-and-a-half days over two weekends using borrowed equipment, re-cycled sets, and left over 'short ends' of film stock, Fred Olen Ray's particularly silly comedy horror/film noir spoof Hollywood Chainsaw Hookers – featuring Gunnar 'Leatherface' Hansen as the leader of a buzzsaw-worshipping cult – pretty much does what it says on the tin. Do you want naked ladies of the night hacking up dopey Johns with chainsaws and getting covered in blood? Then step this way... 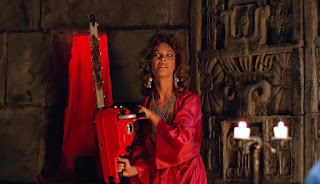 “If you have committed a homicide please stay on the line, we would very much like to hear from you.” Jack Chandler (Jay Richardson) is a hard-nosed Private Investigator, a boozing, drinking, skirt-chasing sort straight out of a pulp detective novel – and he's got a bizarre new case on his hands. It starts out as a simple issue of tracking down a runaway girl – Samantha Kelso (Linnea Quigley, Silent Night Deadly Night) – but, as these things mysteriously have a habit of doing, the situation escalates as a spate of chainsaw murders intersects with Jack's case. 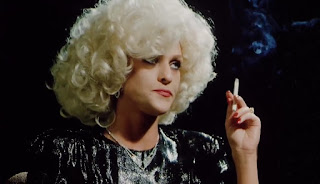 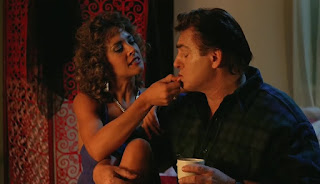 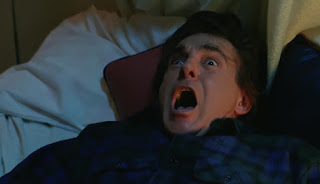 “Hey, you moron, I'm a lady. Any jerk can see that … but, I do, occasionally provide services to release tension in our city's workforce – a social worker of sorts – and God knows you could use some social work.” Mercedes (Michelle Bauer – as McLellan – Sorority Babes in the Slimeball Bowl-o-rama) is just one of a series of girls under the control of Gunnar Hansen's dark and brooding cult leader. Within ten minutes she has stripped off and is getting splattered with severed body parts – and so it goes for the duration as Jack attempts to save the girl and solve the case. Suffice it to say, it's a simple plot – and the film clocks in at a mere 75 minutes (including credits) – but striking out from the era of scruffy, low budget genre flicks that hit pay dirt on the VHS market in the late 1980s and early 1990s (see also Sorority House Massacre II), it gets the job done with a considerable helping of cheese. 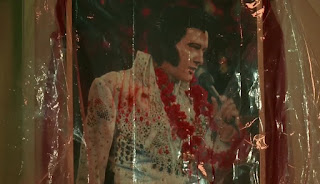 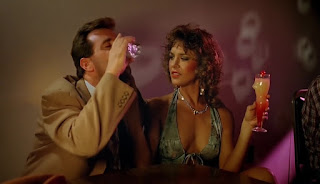 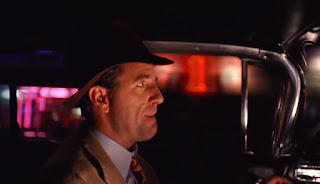 “She said she was selling – but not a car – Mercedes was her name, low miles, built for comfort not speed.” With saucy tongue firmly jabbed into bloody cheek, Hollywood Chainsaw Hookers is goofy from the get-go as it leans in hard to the smut movie style comedy dialogue and beyond daft premise. File this in the cabinet marked 'Crap but Good', if you can squeeze it in amongst all the tits and thrown cups of fake blood that you'll find in there. Indeed, being that the film was made in such a rush for so little money, don't expect much on the gore front. Beyond a couple of raggedy latex prosthetics the most you get is the crimson stuff being hosed in from outside the frame, typically drenching one of the pleasingly up-for-it actors in the process. 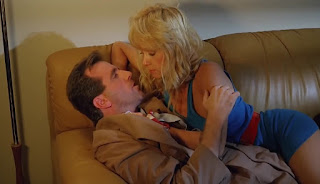 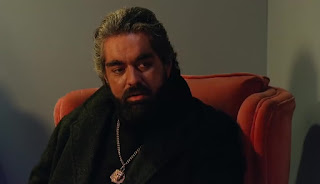 “Chandler! Just what I need – another Private Dick in my face!” So it's light on gore, but with a healthy dose of T&A it manages to tickle the right spots. One of the main highlights of the film is the aforementioned scene of Michelle Bauer introducing her 'special surprise', mixing cheeky skin flashing with goof ball humour; she dons a shower cap and covers a poster of Elvis with a plastic sheet before getting down to business. She even chops off a quivering hand that grabs her blood-soaked boob in the process and flings it over her shoulder with all the 'been there, done that' weariness of a demented plastic surgeon. Meanwhile, another highlight is 'the virgin dance of the double chainsaws', in which Linnea Quigley exits an Egyptian sarcophagus (visibly high on the petrol fumes) – dressed in nothing more than a sparkly thong and a lick of paint – and proceeds to swirl two working, smoking chainsaws about as the cult watches on. 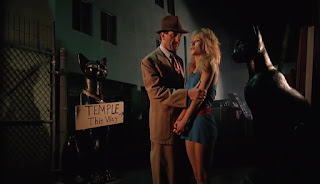 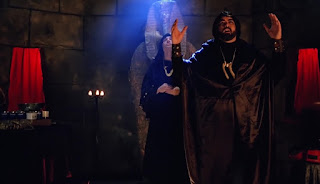 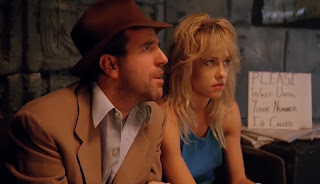 “I don't care how many lunches you lose, I want to know how many victims are in that bag and soon, or I'll find another Coroner!” Cheap and cheerful is the name of the game here. The cheers of a stadium roar out over a gathering of a handful of extras (sourced, it is rumoured, from a nearby street corner), coverage is minimal and mostly limited to wide shots, and the sets are simple three-wall jobbies where you can almost see the paint still drying. However, despite its significant production limitations, the full-on absurdity of it all wins out in the end. The movie lacks finesse – the extraordinarily tight production schedule and need for no second takes charges a hefty toll – and it isn't what you'd call visually spectacular (unlike the impressively flash Sorority Babes in the Slimeball Bowl-o-rama), but there's no denying its staying power. Indeed, the film even managed to land in hot, tabloid-tainted water in the UK in the early 1990s: bizarrely, the word 'chainsaw' was deemed too much and so it was dubbed Hollywood 'picture of a chainsaw' Hookers, and was cut by 70 seconds (the gory chainsaw bits, mainly) until recently - 88 Films' Blu-Ray release, reviewed here, is fully uncut. For more 'weird Egyptian cults and sexy ladies wielding chainsaws' be sure to check out the deliriously fun Bloodsucking Pharaohs in Pittsburgh. 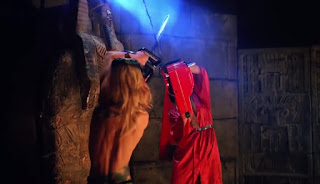 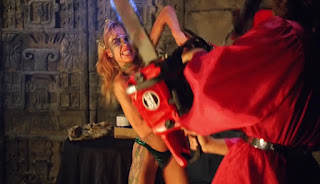 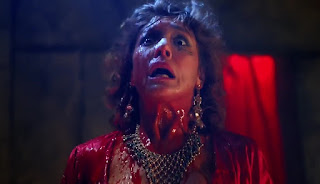 “If my head wasn't hurting so much I'd have sworn I was in heaven – heaven for guys who like big tits.” Featured as a part of 88 Films' 'Slasher Classics Collection', this Blu-Ray (released in 2015) packs a tidy punch as a complete package. Picture wise, the HD scan preserves the dirt, grain, and some considerable scratches, but is otherwise sharp and generally quite good. Audio wise there's either a 5.1 DTS-HD MA or LPCM Stereo track to choose from, although the soundtrack itself isn't always clean with some intermittent moments of distortion scattered across the running time. Special features is where this release shines, though: there are two audio commentaries for the feature (one with Director Fred Olen Ray and his fellow filmmaker buddy David DeCoteau, the other with genre aficionado Callum Waddell and 'Teenage Wasteland' author Justin Kerswell), trailers, Fred Olen Ray's Nite Owl Theatre (a 5 minute intro/outro), Remembering Chainsaw Hookers 27 Years Later (a fun 22 minute retrospective with a few familiar faces interviewed), and an Archive Making Of (23 minutes long, but it covers a few tidbits mentioned in the other featurette). The big treat, though, is the inclusion of Linnea Quigley's Horror Workout (a 60 minute bonus feature), which also has its own accompanying audio commentary. You know you can't resist the sight of Thriller-esque zombies doing poolside aerobics and a machete-wielding killer in a Ronald Reagan mask taking cut backs a bit too far.

N.B. Screenshots are not from the Blu-Ray (I don't have a HD disc drive, so I can't take snapshots from the disc itself)!
Posted by Nick Thomson at 17:24