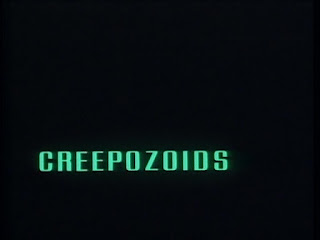 “More acid, more megatons – it ain't over yet.” David DeCoteau's low budget creature feature has aspirations walking in the footsteps of Aliens (James Cameron, 1986), but let's be honest, those are far out of reach. However, influenced at the time by the last dregs of Cold War nuclear paranoia, Creepozoids – with its bleak world view and gooey practical effects – provides a charming dose of VHS era sci-fi horror. The year is 1998 and World War III has turned planet Earth into a nuked-out husk where nomads and survivors populate the wastelands as the fighting rages on... 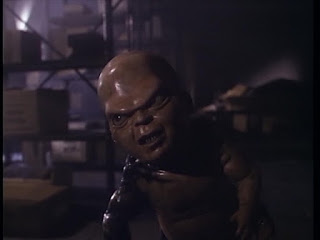 “If this is poison, give me more.” Four hundred miles from 'New L.A.' a group of survivors – deserters from the front line of the war effort – seek shelter from an impending acid rain storm inside a seemingly abandoned underground complex. Secure and stocked with supplies, it seems too good to be true, but when there are warm beds and hot showers available who in their right mind would look a gift horse in the mouth? If only they'd seen the opening scene in which a biomedical scientist (Joi Wilson) is devoured by one of her creations. 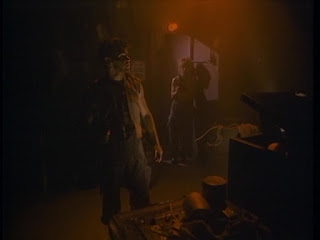 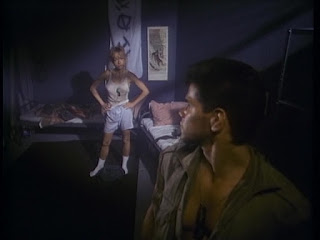 “Civilisation doesn't have all the comforts of civilisation any more.” As spunky Bianca (Linnea Quigley, Hollywood Chainsaw Hookers) and horny-as-hell Butch (Ken Abraham, Vice Academy, the 'Hudson' of the team) get down to business in a soapy shower, tech-savvy nerd of the group Jesse (Michael Aranda) has other concerns while hacking into the facility's computer. Genetic experiments have been occurring here and, sure enough, in a scene torn straight out of Alien (Ridley Scott, 1979), Jesse suddenly begins to deform and mutate before he ultimately carks it. With giant beasties coming out of the woodwork and trapped by the acid storm raging above ground, it's up to the rest of the team to try and figure out a way to survive – but can they? 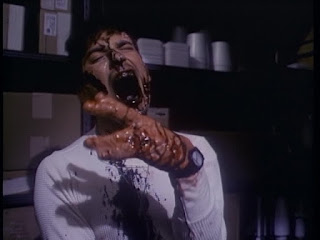 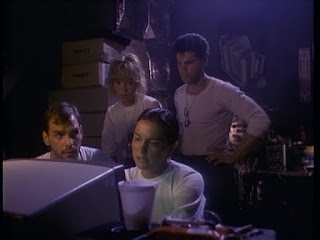 “Rats! I can smell 'em!” Despite its budgetary constraints and brisk twelve day shoot, DeCoteau's film aims high. The opening scene, for example, fleshes out the atmosphere with some moody lighting and the use of a dolly track to liven up what could otherwise have been, in less inventive hands, a rather plain and static wide shot. The script, written by Burford Hauser and David DeCoteau, does tend to stumble intermittently throughout. Some sparky lines do battle with some rather corny chunks of exposition, and as such the acting is similarly uneven – but the likes of Linnea Quigley invigorate proceedings. At a brisk 69 minutes (including credits), the film doesn't outstay its welcome, although the final act – even with a slimy, toothy, six foot monster stomping about – does slip into drawn out repetition. 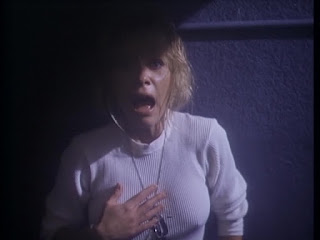 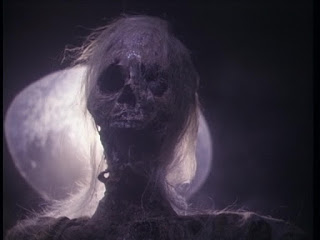 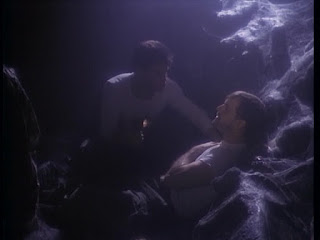 “This is wrong – all wrong – we don't know what this is. We need ammo, weapons, explosives: fire power!” However, the down and dirty practical effects – including some gleefully moist, pulsating, blood-oozing mutation sequences – prove to be one of the most pleasing aspects of the film. Members of the cast, such as Kate (Ashlyn Gere as Kim KcKamy, Willard) and Jake (Richard Hawkins), wrestle with giant rats and a mutant baby creature with jagged chompers and an attitude problem. Puppets, men in suits, and animatronic wizardry on a tight budget (reportedly $75,000) is what it's all about. 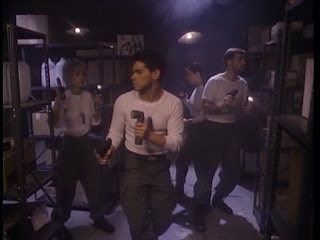 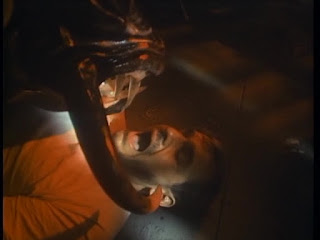 “Hey, come on, more than three shakes and you're whackin' it.” In need of a little more humour to balance things out, Creepozoids doesn't waste much time getting down to it, but its attempt to pull off relatively serious sci-fi horror chills in the vein of Alien (the opening credits feel like a conversation with 'Mother') isn't especially successful. As a goofy, scrappy straight-to-video exploitationer with a pulsing synth soundtrack it does the job and manages to make the most of a meagre budget. While it's best to aim high, Creepozoids' sights are set on other fare that's decidedly out of reach. That all said, if you dig this kind of fun, it's worth a look, particularly as it paved the way for DeCoteau to make 1988's deliriously enjoyable Sorority Babes in the Slimeball Bowl-o-rama. 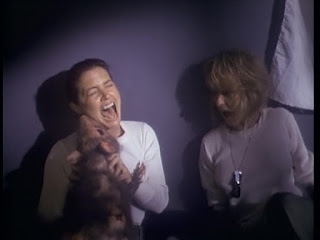 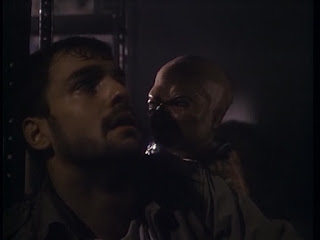 “Let's not turn this into a slumber party, okay?” 88 Films' region free DVD release from 2013 (part of the 'Grindhouse Collection') presents the film in its original aspect ratio of 4x3 with 2.0 Stereo sound. The picture is solid, albeit soft and far from remarkable, and the audio is reliable (save for one or two brief instances where it sounds like the movie is being played to you through a drainpipe). What about the supplemental material? You get the original trailer, the 'Full Moon Trailer Park', a minute-long stills gallery that mostly focuses on the film's various VHS covers, reversible cover art, and Filmgore – a two hour long compilation of horror movie highlights (Drive-In Massacre, Driller Killer, Snuff, various works from Herschell Gordon Lewis etc) that is hosted by Elvira.
Posted by Nick Thomson at 17:16