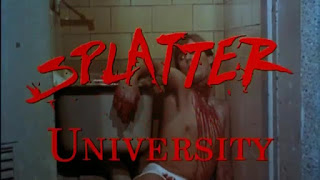 “It seems to me that if you're going to kill someone you at least get to know them real well.” From the director of Class of Nuke 'Em High, Splatter University – otherwise known as Campus Killings – is a cheap as chips horror comedy in which a bunch of reprehensible, unteachable college kids test their new teacher's patience while getting bumped off during the new semester. The trailer and 'back of the box blurb' sell it skilfully, but what's it really like – a forgotten gem, a dropped turd, or perhaps a malodorous diamond? 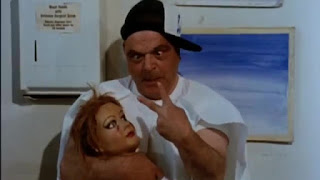 “I trust you heard of the tragedy last semester?” 2:43pm, a psychiatric ward: William Grayham, a paranoid schizophrenic, is missing. He claims his first victim, a member of staff, steals their clothes and scarpers. Fast forward three years: St. Trinian's College (no, not that one), and a sociology teacher is bumped off in similarly bloody fashion. Fast forward to next semester, then immediately rewind to yesterday for no particular reason: replacement teacher Julie Parker (Forbes Riley) arrives to start her new job. As if she wasn't nervous enough, having to stand in front of a bunch of feckless and disengaged students, Father Janson (Dick Biel) reveals that her predecessor was brutally murdered. Things get off to a tense start for fledgling Professor Parker when she dares to broach a controversial subject at the Catholic institution, but when one of her students vanishes it's only the beginning of a nightmare. 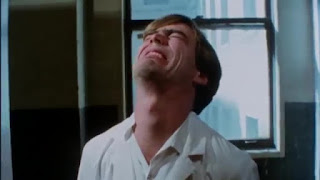 “Oh, gross! There's a fingernail in my pie.” Fast forward another three weeks, because why not, right? Julie's getting interested in Mark (Ric Randig), who claims he hardly knew her murdered predecessor – but he's lying! As the body count rises, so too do suspicions around Mark, compounded by workplace BFF Cynthia (Laura Gold) and Mark's penchant for collecting newspapers with grisly headlines. Can Julie uncover the truth? Will any of the students give a single solitary shit that their buddies are carking it? Have we time-jumped enough for one 77 minute movie? 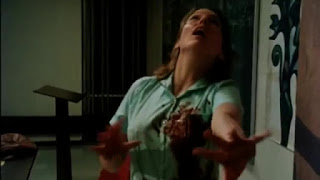 “What about 'Minions of Satan'? Come on, you can't beat that.” Originally shot in 1981 during the peak of slasher movie mayhem, the film came in decidedly brief at 65 minutes, but fast forward (naturally) to 1982 and additional footage was gathered and inserted into the movie. Fast forward (yep) to 1983, no wait, 1984 (hence the hand-painted extra “I” on the Roman numeral in the credits … never mind that 4 translates as “IV” and not “IIII”) and the flick was finally released by Troma Entertainment, those purveyors of preposterously pustular and sleazily sexy B-movie trash epics. Suffice it to say, but Splatter University (deliciously monikered in the trailer voice over as “Splatter You!”) journeyed an arduous path to the silver screen. Indeed, when the continuity person quit, lead actress Forbes Riley gamely took on their duties in the hopes of maintaining some sense of order. However, the film's main flaws and successes come down to the script – written by Michael Cunningham, Richard W. Haines, John Elias Michalakis, and Miljan Peter Ilich. 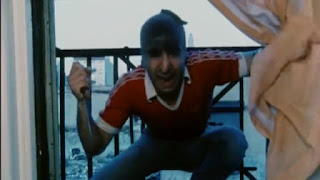 “Hey, what else do you go to college for?” For a cheap and cheerful slasher movie, Splatter University tries to tackle several serious issues. An early scene finds Julie nervously wrestling with the topic of abortion (at a Catholic school, no less), which extends into a subplot involving Cathy (Kathy LaCommare) who discovers she is pregnant by her bullying, belligerent boyfriend Tom (Ken Gerson) and has to wrestle with the practical and moral quandary of her situation. Elsewhere, the script also alludes to New York's then-recent financial woes – and the interlinked policy change for mental health provision, which saw numerous mentally ill patients being dumped out onto the streets. It even touches upon the separation of Church and State and overtly religious moralising. Sounds impressive, but, with the scattered production, many of these elements overextend the abilities of a scruffy screenplay which reflects the cobbled-together nature of the whole endeavour. 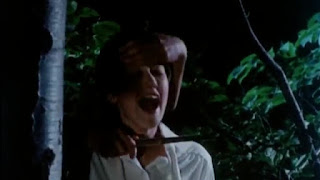 “You cheap bastard, after all the dope I sold you? You ingrate!” All said and done, the film is a mixed bag. There are some killer lines of dialogue when you listen closely, and they belong to a largely immoral gang of students, who are written as an un-likeable crowd of self-involved, nihilistic morons who are as wasted in the educational system as they are in the gene pool. They're anti-intellectual, they cheat on their partners (and exams!), and when one of their own goes missing their search only lasts as long as it takes them to reach the car – because they're more interested in partying. The life of a fellow student is worth as much to them as the beer cans they toss into a dumpster which, much to their wilful ignorance, contains the body of their friend. 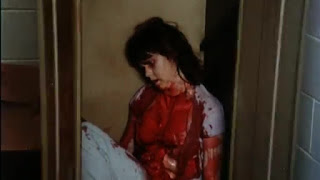 And yet there are also numerous problems. Several scenes are padded out with clunky filler dialogue, and the movie breaks one of the core tenets of screenwriting – every scene needs to have a clear purpose for being. On a handful of occasions something is set up, but the anticipated pay-off fails to materialise (e.g. Denise's meeting with Father Williams). Structurally, too, the film is all over the place. The clearest example of this would be Julie and Mark going on a date: first they're at his place and discuss going to the cinema, then we immediately cut to them already leaving the cinema as they consider heading back to his place. This whole sequence, jarringly edited, happens inside of roughly a minute, and while it arguably serves some purpose in the grand scheme of things, the slap-dash handling saps from it any worthwhile juice. The slasher movie evolved from the Italian giallo film, and as such there tends to be an element of mystery to the typical slasher plot – something which Splatter University fumbles, what with its one red herring and a rushed reveal. However, despite the film's evident deficiencies, it still manages to toss a curve ball at a well worn formula. 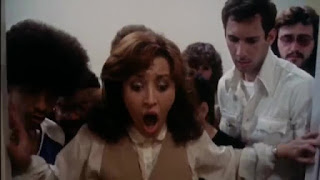 WARNING: SPOILERS – IF YOU DON'T WANT TO KNOW THE THIRD ACT TWIST AND REVEAL, SKIP TO THE NEXT PARAGRAPH.

“Leprosy? Hey man, is that contagious?” One of the most common elements in the slasher movie formula is the 'final girl', an aspect of the genre which was brilliantly analysed by Carol J. Clover in her seminal text “Men, Women, and Chainsaws”. Films like Halloween and Friday the 13th clearly established the notion of a virginal young woman who becomes the last person standing after the killer has whittled down their group of socially and sexually liberated friends, but instead of succumbing to the killer's blade this 'final girl' challenges the murderer and wins, making it to the end of the movie, traumatised but stronger. Splatter University, on the other hand, makes the surprising move of killing off its 'final girl'. This formula-shattering moment comes as a genuine shock, but the film misses a golden opportunity: instead of framing the red herring for all the murders, the psycho slayer is caught and order is restored. Considering the film's generally nihilistic attitude, it's a shame Haines & Co didn't go that one step further to stick the landing. 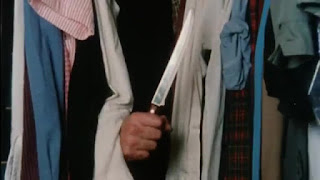 “This is the most disgusting movie I've ever seen” But never mind all that high falutin' talk of thematics and screenwriting craft, because many slashers live or die by their exploitable elements: the two extremes of the human experience – sex and death. Well, there's sod all sauciness, so disciples of the flesh won't find any titillation, but fans of low budget 80s horror get a few tickles of their gore bone. A scalpel to a man's fun zone elicits spurts of the crimson stuff and many crossed legs from wincing viewers, while a particularly mutilated body in a toilet stall echoes one of most infamous scenes in fan favourite Spanish horror Pieces. There's bloodier and more memorable killer thrillers out there, many of them in fact, but Splatter University does just enough to earn its keep. 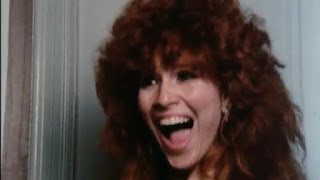 “Of course I got a thing. What do you think I am, a eunuch?” So, how does it fare? Is it a diamond in the rough or a shoddy load of shite? Ultimately, Splatter University is a disappointing entry in an extensively explored genre, but one which nonetheless has its own charms and time capsule intrigue (such as the very Troma-esque cutaway shots). Less forgiving horror fans will, quite possibly, hate it, but hardcore aficionados of cinematic murder & mayhem should find something of value. 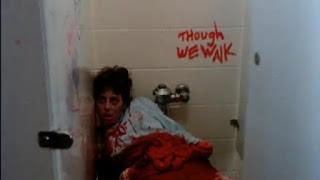 “No way, I'm selling them for ten bucks, I'm not giving them away. What do you think I am, a Communist?” Entry number four in 88 Films' 'Slasher Classics Collection', released in 2015, initially had a print error whereby the 'knife in the mouth' kill at the beginning of the third act was missing, but all vendors should now have corrected copies in their inventories. This is a 2K restoration of the original 16mm Interpositive, according to the back cover, but “restoration” is stretching the term. Many of these low budget films exhibit extra grain, debris, or damage during credit sequences, but even the main bulk of the film shows off a fair bit of remaining print damage. The quality of the mono audio track, meanwhile, is variable and runs the gamut from pretty clear to a mumbly mess (leaving some of the film's best one liners a bit muffled). 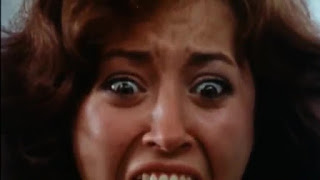 It's also worth noting that of the three images featured on the back cover, only one is actually seen in the movie – the other two are promo shots – as seen in the Stills Gallery. Speaking of extras, there's a 9 minute appreciation of the film by Teenage Wasteland author Justin Kerswell, who gives a spirited defence of the movie's numerous flaws while flagging up some of its successes. There's also a commentary by the director, trailer, TV spots, and a reversible sleeve (featuring Elizabeth Kaitan of Friday the 13th Part VII fame). Finally, there's a bonus film from Richard W. Haines – “What Frightens You?” – a 2010 shot-on-digital movie about New Yorkers facing their greatest fears after taking a survey on the subject.

N.B. Screenshots taken from the trailer (low resolution source), because I don't have a BD-ROM drive.
Posted by Nick Thomson at 11:23