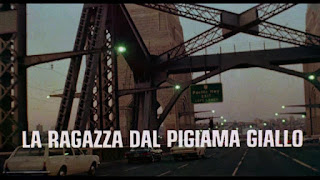 “Just because it's written down it's true, huh?” By 1978 the heyday of the Italian murder mystery – or 'giallo' – had been and gone, but that didn't mean there was nothing of interest still to rinse out of the well-strained genre. Writer/Director Flavio Mogherini's murder mystery casts aside much of the classic tropes and visual styling of the typical giallo film (black gloved killers, gleaming knives, an escalating series of grisly deaths, European glamour) in favour of – egads! - just one murder in, of all places, Australia's Sydney with its sun, sea, and sand. Do not go into this movie expecting killer thrills by any means and, whatever you do, don't read the spoilerific blurb on the back of the box!... 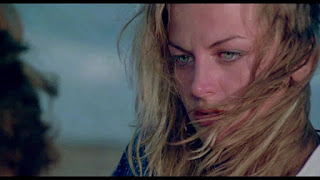 “Modern delinquents are a different breed and chances are they're stoned and they're meaner, and don't take this to heart but age isn't on your side. God knows what you'll run into in a case of this kind.” In the fading light of another gloriously sunny day at the beach, as a band of boys romp their dirt bikes through the surf, a little girl merrily skips through the sand and comes to a rest beside a pair of crashed cars that have, for some curious reason, ended up abandoned almost in reach of the salty spray. And then a limp, dead hand flops from the wreckage and terrifies the little girl, her screams ringing out in layer upon layer of terror before merging into the wailing sirens of the nearby city of Sydney. Retired homicide detective Inspector Timpson (Ray Milland, Dial M For Murder), a Canadian immigrant with old school flat footed techniques, is alerted to the case by young gun Inspector Morris (Rod Mullinar) – much to the chagrin of his brash partner and their embittered boss – and manages to bully his way onto the investigation. 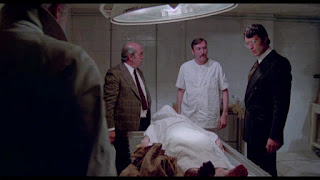 The body is that of a young woman, rendered unidentifiable by partial burning, who was shot and bludgeoned for reasons unknown by a killer (or killers) who are also unknown. There's little to go on beyond the burlap sack in which she was hidden and a few grains of rice – but these are details enough for Timpson to begin his dogged pursuit of the truth, moreso when Morris' partner is keen to start off with a pre-emptive determination born out of a classroom obsession with psychoanalysis: clearly it'll all come down to a sexual deviant with mummy issues! 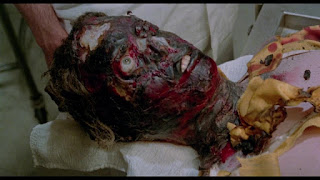 “I bet you're one of those guys who keeps a girl's underwear as a trophy.” Meanwhile, we're introduced to Dutch immigrant Linda (Dalila Lazzaro, Phenomena), a beautiful and breezy young woman who is seen touring through her stable of lovers: the aloof, wealthy, and much older Professor Henry Douglas (Mel Ferrer, Nightmare City), the sexually aggressive German immigrant Roy (Howard Ross, Five Dolls For An August Moon), and the weak and introverted Italian immigrant Antonio (Michele Placido). Reading between the lines it's hard to figure out what exactly Linda wants out of life, although it is suggested that she has fled her homeland of Holland – and Amsterdam's Red Light District – in search of a new life, one which continues to elude her as she roams from one dead end job to another, all-the-while with a wistful look of melancholia subtly creasing her features. Despite her sexually liberated lifestyle and with youth on her side, she cannot find all of the pieces that would constitute the perfect man in one single place. Henry is wise and financially secure, Roy is filled with sexual ability, and Antonio is sweet and loyal – but, in turn, they all have their downsides: old fashioned, misogyny, or weakness. Linda can never escape the feeling of isolation and disconnection, something which only gets more clear and desperate as the film progresses. Indeed, her sense of loneliness permeates much of the cast, and is most keenly felt during a sequence when Antonio shuffles about alone amidst an almost deserted cityscape. The isolation of immigrants is a continuing theme throughout the film, with Mogherini examining it from a cold distance which further segregates the 'locals' and the 'foreigners'; the lingering subtly yields little in-the-moment, but does leave in its wake an emotional aftershock to resonate inside the viewer. 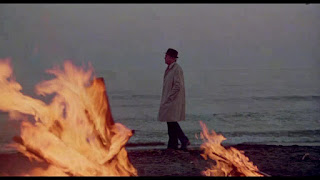 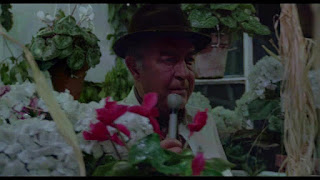 “You are crazy and I love you.” The investigation, meanwhile, meanders on with Timpson trudging from one sliver of a lead to another while the rest of the department seem intent on fitting up the pervy Quint (Giacomo Assandri) as a 'sex maniac' whose proximity to the body's dump site seems to be evidence enough – until he is discovered to be in possession of a watch that belonged to the unidentified victim. Is it case closed, or is there more going on that is yet to be discovered? Who knows, because Timpson is playing coy with his theories, backed up by his hunches, as he plays fast and loose with evidence. 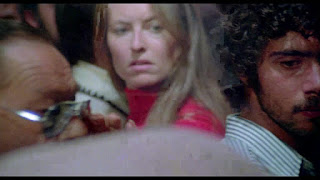 “Nothing's really changed much. Two lonely people together, worse than one.” The Pyjama Girl Case is more of an interesting film than an entertaining one, worth more in terms of academic study than killer thrills, what with it's generally slow pace, guarded secrets, and the fact that the entire plot line following Linda feels disjointed for the bulk of the running time. Still, the film is not without some stand out sequences, such as the wrenching sense of tragedy that is painted across the final moments (set at a cemetery overlooking a picturesque view of the ocean), or a scene which confirms Linda's history of prostitution. In this latter scene, Lazzaro's performance is captivating, from the moment she coldly and professionally states her price as a tear rolls down each of her alabaster cheeks to the drawn out and uncomfortably creepy deed itself in which two sweaty, old, and ugly men use Linda while their thirteen year old son/nephew looks on – his soul shaken eyes matching those of Linda, whose unblinking gaze locks onto that of the boy who, eventually, can take no more and turns away with a mix of shame and horror. 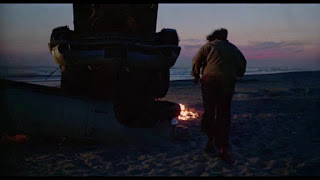 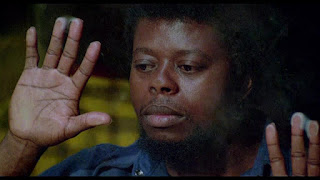 One of the film's other highlight sequences is, bizarrely, based on the true story of the Albury 'Pyjama Girl' case in Melbourne, Australia in the 1930s, during which the body of an unidentified female was put on display in a glass case for public exhibition in the hopes of dredging up some leads. Much as in real life, the Jane Doe of the film is revealed to the public – the horrifically burned remnants of the face gazing back at them – and it makes for a disquieting sequence as the public filter around the display case. Blank faces pass by the glass (even pressing up against it and leaving greasy marks), people faint and examine and leer and explore the body from all angles – one man even crawls beneath the display to assess the pubis and rear end with near-forensic attention. 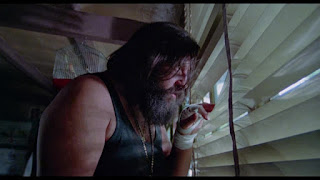 “Disgrace me in front of this beautiful young lady.” All in all The Pyjama Girl Case makes for a mixed viewing experience. While it's almost entirely devoid of the thrills and mayhem that gialli are so well known for, it does – strangely – somewhat benefit from almost being the total antithesis of a giallo. The choice of location alone sets it apart, although the Italian obsession with gleaming glass, crisp concrete corners, and steel architecture is unmistakable, while tourist spots like the Sydney Opera House brush up against gritty realism with a visit to, for instance, a steam-choked laundry manned by undocumented workers. The break away from killer thriller tradition is interesting, and the tale is told through a strong visual sense and surprisingly deep character drama, but there's no denying that the film is too long to sustain the central storytelling conceit. And the less said about the recurring and honestly quite wretched 'romantic groove' songs the better – but the bulk of Riz Ortolani's score helps right the ship, with a mixture of energetic disco synth and the heart wrenching sorrow of wasted lives. 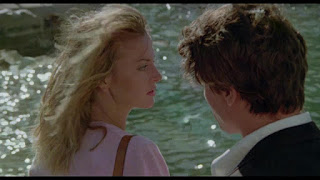 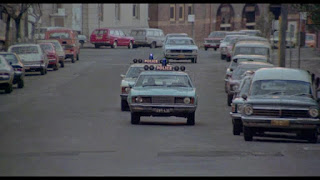 This all said, the film is not without a sense of humour at times – Timpson's goading jibe at Quint, for instance – and there are numerous little details that display a depth of thought that could be lost to the glacial pacing. Roy, much like Quint, seems to have an obsession with plastering his walls with pornography, while Inspector Timpson, keen to be back on the hunt again, is nonetheless utterly exhausted by foreign languages and perturbed by a 'flaming Queen' who married for immigration status, such are the feelings of this old detective who has found himself outside of the time and culture that he is living in. Another moment, wrought with quiet desperation and sadness, sees a bereaved mother donate unused baby clothes to a pregnant stranger who watches silently as an apparent gesture of support belies a crumbling marriage. 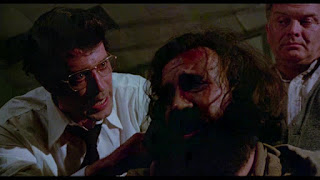 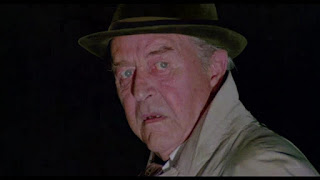 “You're the youngest, prettiest girl who's ever come into this tomb.” Arrow Video's 2018 Blu-Ray release maintains the expected standard that this company has produced in recent years. The film is presented in a brand new 1.85:1 2K restoration from the original camera negative with mono audio in either English or Italian with your choice of optional English or Italian subtitles. Extras wise there's a surprising amount of meat on the bone: an audio commentary by giallo expert Troy Howarth, a very well informed examination of “internationalism” in the giallo by author/critic Michael Mackenzie, interviews with actor Howard Ross, editor Alberto Tagliavia, assistant director Ferruccio Castronuovo, and composer Riz Ortolani – plus image gallery, trailer, and reversible sleeve.

N.B. Screenshots are taken from a lower quality source and not the Blu-Ray that is being reviewed.
Posted by Nick Thomson at 11:00