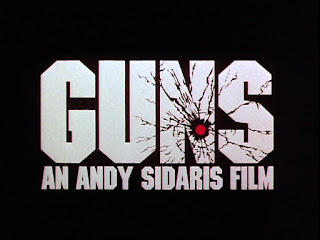 “My bet is a Smith & Wesson beats four aces.” A crime lord nicknamed the Jack of Diamonds wants to run guns from China to South America via the Hawaiian island of Molokai, which is protected by the smart and beautiful agents of 'The Agency'. In order to lure them away to Las Vegas, he sets about assassinating members of their ranks, but now they're ready to fight back. Featuring death by toy boat, random ninjas, and a part-time magician with a strong disliking for due process, it could only be an Andy Sidaris movie... 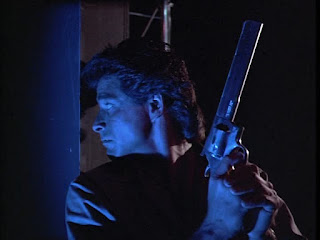 “Gentlemen, just use the cerebral approach.” / “How's that?” / “Shoot her in the head.” Erik Estrada (ChiPs) is Juan Degas, a South American gun runner with a vendetta against 'The Agency', who have been troubling the business dealings of him and his nefarious peers for too long. Looking to secure a major new deal in smuggling Chinese assault rifles to the Americas, he hires two bumbling assassins with a penchant for complex kills and cross-dressing (both on-the-job and after hours), to take down his enemies in law enforcement. However, when they mistake a honeymooner for Nicole Justin (Roberta Vasquez, Picasso Trigger), it's up to Nicole and Donna Hamilton (Dona Speir, Savage Beach) to lead the charge, avenge the death of their friends, and take down a dangerous criminal. 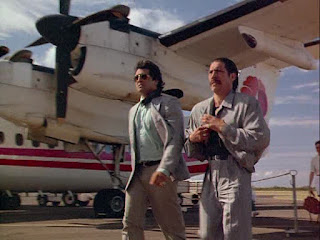 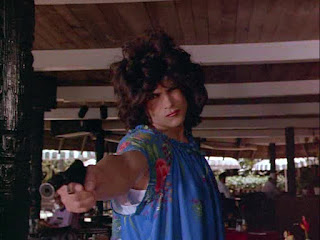 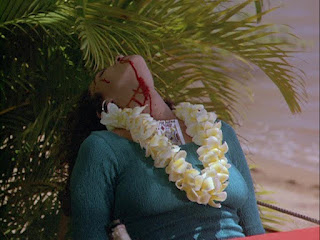 “Why don't you settle down, get married, have babies?” / “Some of us just aren't cut out for that line of work.” As it turns out, things are about to get a whole lot more personal, as Juan Degas is in fact the same man who killed Donna's father, who was battling drug smugglers in South America. Time to round up all the troops – Sidaris seems to have a habit of using three times are many characters than usual to tell a story – don some airy clothing, and load up that quadruple rocket launcher! 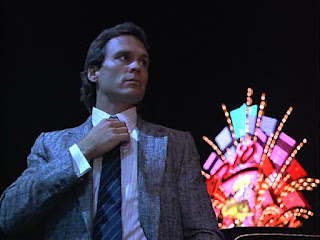 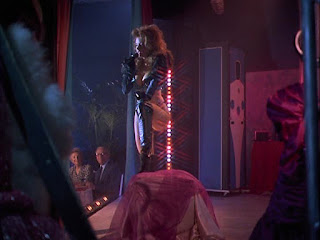 “I guess I better watch my ass, huh?” / “I can help with that.” There's something about a snake infected with weaponised cancer exploding out of a toilet, that leaves any viewer of an Andy Sidaris movie expecting anything to happen at any moment. Such a bizarre highlight (as seen in 1987's Hard Ticket To Hawaii) can mean the viewer becomes inured to some of the relatively less bizarre moments in Sidaris' movies, but it should be remembered that if any of these weird 'n' wacky events turned up elsewhere, then the viewer would be left reeling in a whirlwind of WTF shock and awe. 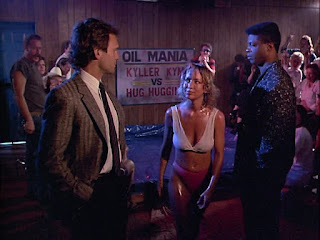 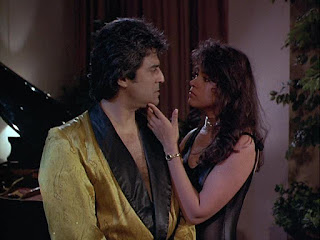 Take, for instance, the character of Abe (Chuck McCann, Ducktales: The Movie), Vegas magician by night and undercover 'Agency' team member by day, who walks into an interrogation room, performs some ropey magic tricks, and punctuates his line of questioning by arming the two suspects (he throws down a knife and gun within their reach) to give him the excuse to extract a pump action shotgun from an entirely too-small cow skin briefcase – at which point he blows them away. The scene's all-the-more gleefully ludicrous due to, not only a tenuous bit of slapdash justification for revenge via a flashback to a previous film, but Abe's utterly nonchalant exit from the scene. 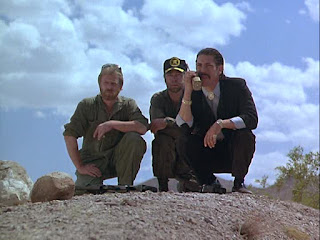 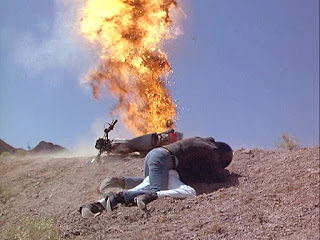 “Don't just do something – stand there!” The viewer could make a drinking game out of Guns, what with Sidaris utilising some of his favourite recurring ideas. Prominent advertising for businesses that aided the production? Check. Deadly remote control toys? Check. Trying to look bad ass while holding a tiny gun? Check. Cow skin suitcase? Check. Cross-dressing? Check. The dreadful aim of the Abilene family? Check. Molokai Cargo? Check. A fetish for different modes of transport? Oh, that's a big old check on that one: cars, vans, jeeps, limousines, speedboats, yachts, helicopters, planes, motorbikes, and even a ruddy ultralite are all utilised. 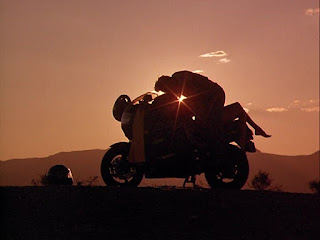 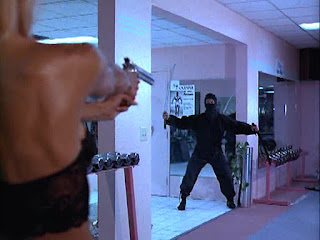 “My boyfriend doesn't want me to oil wrestle any more.” / “Why's that, Hugs?” / “He doesn't think it's dignified.” / “Neither is a blowjob, but does he complain about that?” After a somewhat coy first act, and just when the viewer is thinking that maybe Sidaris has eased off on his penchant for random T&A with this fifth entry in the L.E.T.H.A.L. Ladies saga, along come oil wrestlers Kyller Kym and Hugs Huggins (now there's a set of character names!), yet more agents for the ever so vague 'Agency' with a sideline in the world of Las Vegas showbiz. Although, compared to some of the previous entries in the series, Sidaris does find a more respectable balance between exposure and explosions, and continues to finesse the storytelling by trimming the fat and maintaining a decent sense of pace. The film clocks in around a not-too long, not-too short 95 minutes, and chucks in enough sunny locations (the arid and rocky areas of Nevada take centre stage) and chases (dirt bike vs ultralite makes for damn good fun) to keep the viewer engaged. 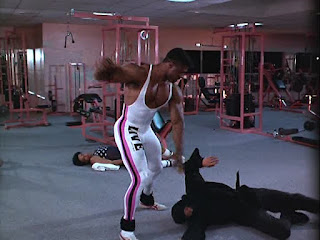 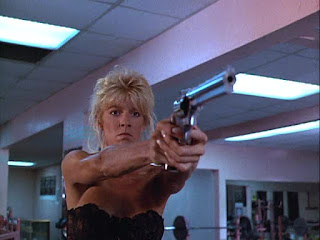 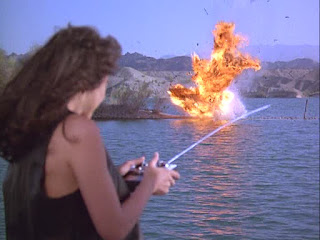 “We also received word that two of our people were taken out by some fat guy with magic tricks.” After the somewhat streamlined Savage Beach (1989), Sidaris skews back towards the extravagant ensemble cast numbers of Picasso Trigger (1988), with a host of familiar faces. Bruce Christian (Bruce Penhall, Enemy Gold), Edy Stark (Cynthia Brimhall, Do Or Die), Shane Abilene (Michael J. Shane, Hard Hunted), Rocky (Lisa London), and Brown (John Brown) are just some of the recurring characters who are joined by familiars and newcomers alike, such as Rodrigo Obregón (Day of the Warrior) as 'Large Marge', and William Bumiller (Death Spa) as Agency team leader Lucas. However, the most surprising appearance is an early role for Danny Trejo (Machete, From Dusk Till Dawn, and so many more) as Juan's right hand man Tong – his appearance alone elevates the movie another notch. Well, that seems like a pretty heft cast, right? Surely that's everyone accounted for? Nope! There's plenty more characters that haven't even been mentioned! Such a weighty cast is an overwhelming experience for those who are new to Andy Sidaris' oeuvre, but once you become familiar with the recurring characters – and Sidaris' pretty unique style – it's all part of the fun. 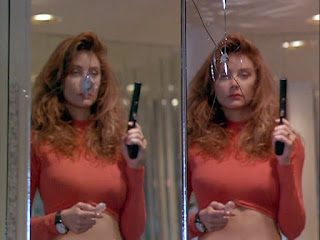 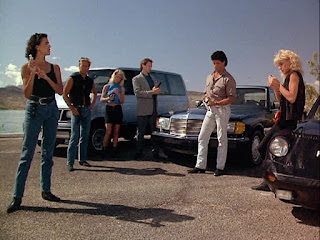 “Special Teflon bullets penetrate anything.” It seems as if Sidaris could never quite top what is arguably his masterpiece – Hard Ticket To Hawaii – but with Guns he does try to recapture as much of that film's fun as possible. Donna and Taryn (Hope Marie Carlton) made a wonderful on-screen team, so fans will be disappointed that Taryn is missing from the line up (with her absence unexplained), but new girl Nicole, who had previously appeared as Pantera in Picasso Trigger, does a valiant job to fill her shoes. There's even a rather overblown high five, a signature of the Donna/Taryn partnership, which seems to play as a beach-set, neon bikini-wearing mission statement to power on forward. 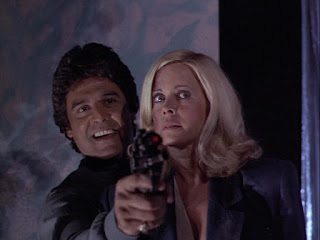 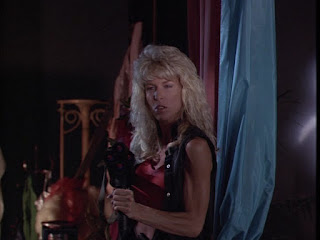 “Yeah, that's me, I do it all from busting heads to making bread.” Now at the fifth entry in the L.E.T.H.A.L. Ladies dozen-strong saga, which saw the series enter the 1990s, you mostly know what to expect from a Sidaris movie, but it's good that even canny viewers can find themselves in for a surprise. Glamorous gals kicking butt, ripped dudes punching goons, gun fights, car chases, proper action and shit (to paraphrase Hot Fuzz) – even precision indoor use of a rocket launcher – it's all in rude health here!
Posted by Nick Thomson at 17:13