More popularly known as The Cemetery Man in English speaking quarters of the globe, Michele Soavi’s bonkers horror comedy became a cult hit upon its original release – birthed from the equally popular cult of Dylan Dog. 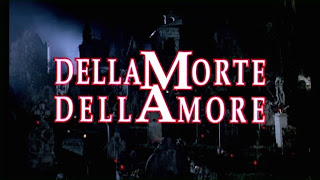 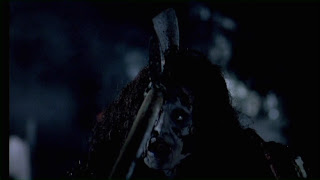 Rupert Everett plays Francesco Dellamorte (meaning St. Francis of Death, when translated), the guardian of the Buffalora Cemetery. Why does a cemetery require a gun-toting guardian, you ask? Because in this picturesque Italian town, on the seventh night after death, the coffins routinely break open, unleashing “returners” that are dealt with in a manner of bureaucratic process. For Francesco, who claims to have only ever read two books in his lifetime (one he never finished, the other is the phone book), the act of putting down these walking corpses has, for him, become a dull desk job (literally in one inventively quirky scene). He seeks something more, something deeper, something with meaning – he seeks love and romance – and he finds just that all-too-briefly in the form of a recently bereaved widow (played by the supernaturally beautiful Anna Falchi). 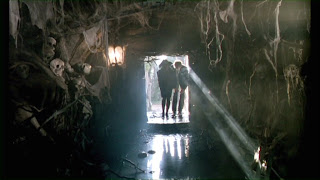 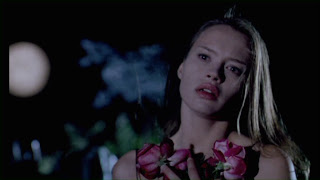 Teamed with a bumbling oddball of a gravedigger called Gnaghi, Francesco soon becomes haunted by the vision of his love in the faces of the women he meets, as all around him entire gangs of teens and busloads of Boy Scouts are offed in darkly comic tragedies only to be gunned down en masse when they inevitably return. At times Soavi’s film is like a spaghetti western clashing with the early works of Sam Raimi and Peter Jackson – the humour is knowing and twisted, and the visuals are simultaneously beautiful and bravura. As Francesco is driven to ‘getting ahead of his work’ by turning to murdering the living, a severed head attacks the Mayor from a tooth’s-eye-view, a bizarre solution to a penile phobia is discovered, and the very nature of life, love, death, and the infinite beyond your own borders are examined. This is indeed a deliciously strange journey that mixes romanticised existentialism with sanguineous evisceration, that truly lives up to the name Dellamorte Dellamore. 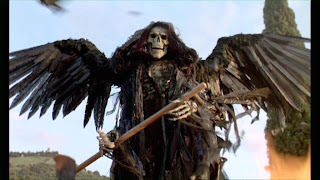 Typically for an Italian film, it looks absolutely splendid. Massimo Antonello Geleng’s production design is intricate and inventive, cast in a world of forever blowing wind that sweeps dead leaves and flowing veils through the air, and Maurio Marchetti’s cinematography is sumptuous (he previously worked on Apocalypse Now). However the script (by Gianni Romoli and Tiziano Scalvi, the latter of whom authored the source text Dylan Dog) deftly matches the romanticised lunacy of the imagery, with a wry wit (“I’d give my life to be dead!”) and a lovelorn sense of melancholy. Gore hounds will also find some significant joy here as there’s more gruesome headshots abound than you can shake a stick at. 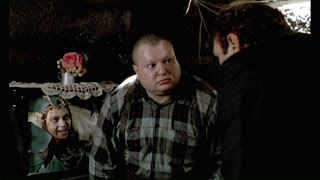 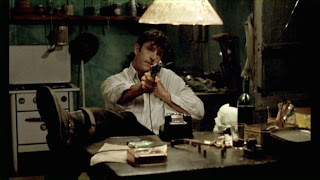 Shameless Screen Entertainment – in their signature stand-out yellow packaging – return with a nicely put together package which, while not boasting a weighty tome of extra features, exhibits an attention to detail and respect for lost gems that has rightfully earned them a reputation for quality releases. An audio commentary from director Michele Soavi and writer Gianni Romoli, trailers, a photo gallery, English and Italian audio options, and a booklet featuring a personal memoir of the movie from respected film writer Alan Jones round out the package.

It should be noted however, that there is a persistent stutter to the video transfer. It's not noticeable in static shots, but is evident during sweeping camera movements. It's certainly not a deal breaker, but it is an annoying frustration.

To see other reviews of Shameless Screen Entertainment releases, use the following links:
Strip Nude For Your Killer (Andrea Bianchi, 1975)
What Have They Done To Your Daughters (Massimo Dallamano, 1974)
Killer Nun (Giulio Berruti, 1979)
Torso (Sergio Martino, 1973)
Night Train Murders (Aldo Lado, 1974)
Posted by Nick Thomson at 18:05