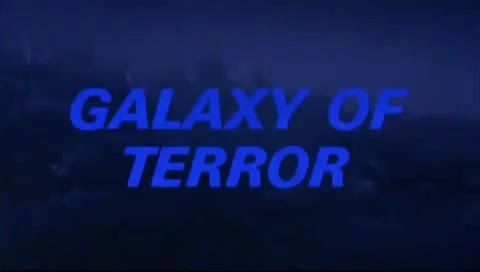 “ALIEN Was Just The Beginning … Hell Has Just Been Relocated!” Produced by Roger Corman – on a relatively handsome budget of $700,000 – if Battle Beyond The Stars (1980) was New World Pictures' answer to 1977's Star Wars, then Galaxy of Terror was clearly their less-than-subtle take on Ridley Scott's Alien (1979). Swapping out H.R. Giger's iconic xenomorphs for – among other things – a giant and rapacious worm-thing – and sticking with the basic setup (oblivious crew sent to a hostile planet to investigate suspicious goings on), Bruce D. Clark's sci-fi horror nonetheless throws up some pleasing surprises... 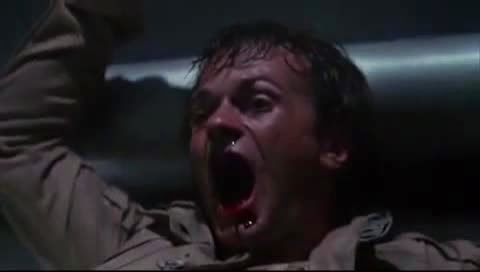 “Death will surround you.” Somewhere in the wind-swept, fog-choked murk of a far flung alien planet – not too dissimilar from a certain LV-426 – lies the Remus, short on crew and in sore need of a tidy up. All hope is lost for those on board, but to The Master – a fan of games with a big, red glowing head – an opportunity presents itself, but at what cost? 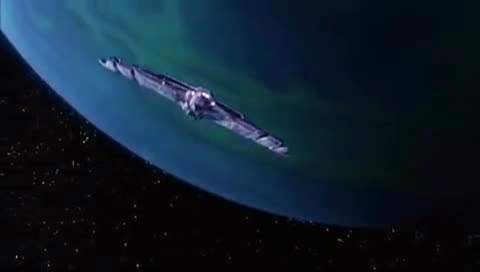 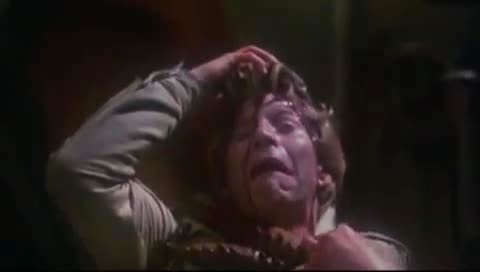 “Hang onto your shorts, we're gonna dump.” Hastily assembled, a new crew – lead by Mission Commander Ilvar (Bernard Behrens) and Captain Trantor (Grace Zabriske, Twin Peaks) – embarks on their journey in a manner that would surely furrow the brows of many a Health & Safety Officer. He's an old man short on courage and yearning for home, while she's a rogue operator and the sole survivor of an infamous massacre that has haunted her for years. No sooner have they exited hyper speed than they're drawn down by unknown forces to crash land on the planet. The ship's in a sorry state but their mission comes first, and so the exploratory team is sent out to search for survivors – and answers. 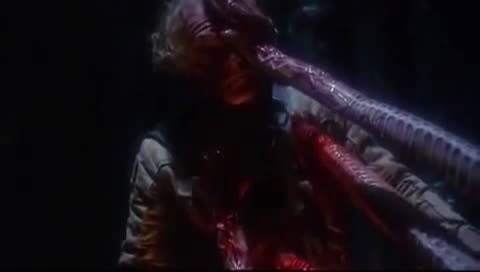 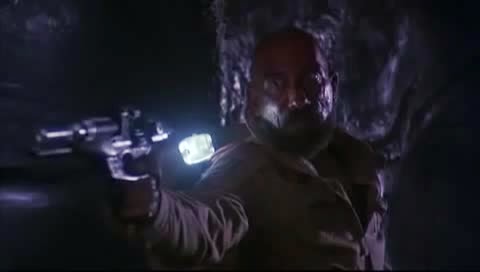 “I don't sense life, I feel absolutely nothing at all; I've never felt anything so empty, so dead.” Baelon (Zalman King) is impatient and not about to win any Team Leader of the Month awards, while Cabren (Edward Albert) is his level-headed antithesis, partnered with psy-sensitive Alluma (Erin Moran, Happy Days' Joanie Cunningham). Also along for the ride are tight-lipped crystal-lobbing Quuhod (Sid Haig), blonde bombshell Dameia (Taaffe O'Connel, New Year's Evil), and fearfully fretful Cos (Jack Blessing). Naturally, with a giant space bug lurking within the crumbling bowels of the Remus, it's not long before a sharp-clawed beast claims victim number one. 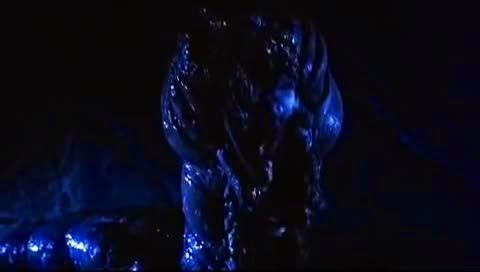 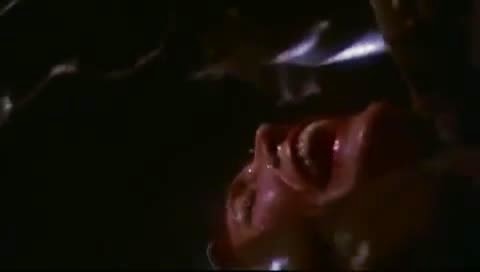 “The Master sends meat, but the Devil sends cooks.” You'd think that would be their cue to get the hell out of dodge (and maybe nuke the site from orbit), but whatever forced them down exists at the unscannable Point 419 – a gargantuan and foreboding pyramid. Trespassers beware: slimy tentacles, glow-eyed aliens, and fear itself await all those who venture beyond it's Giger-esque exterior. Will the explorers discover the mystery of what happened to the absent crew of the Remus, and how many will live to tell the tale? 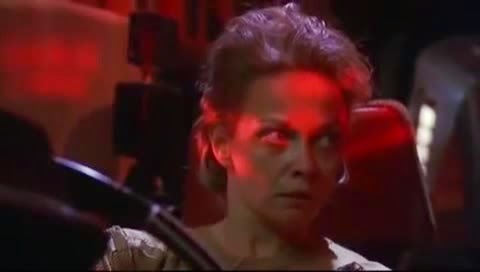 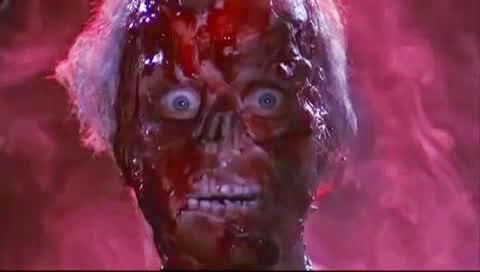 “If you live through this you'll be bringing her roses.” Also featuring Robert Englund (the one and only Freddy Krueger) and Ray Walston (Spicoli's nemesis in Fast Times At Ridgemont High), Clark's film boasts an impressive cast – and an impressive production design. Promoted from Art Director on the previous year's Battle Beyond The Stars to Co-Production Designer (with Robert Skotak) and 2nd Unit Director here, is none other than James Cameron – he of Terminator/Titanic/Avatar fame. Indeed, throughout many portions of Galaxy of Terror you can sense the visual seeds of LV-426 and Hadley's Hope as they were in Aliens: the sequel to the film GoT was imitating, that was directed by James Cameron. Fun fact: Cameron hired his future frequent colleague Bill Paxton as a Set Dresser on this production. Utilising an in-camera combination of impressive sets, miniatures, and matte paintings, what Galaxy of Terror lacks in pace it makes up for in presentation. 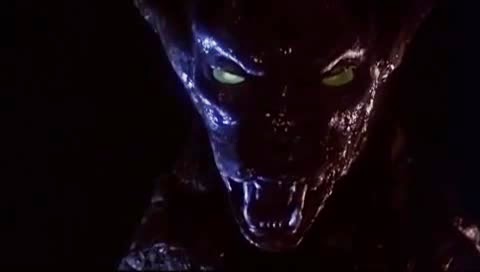 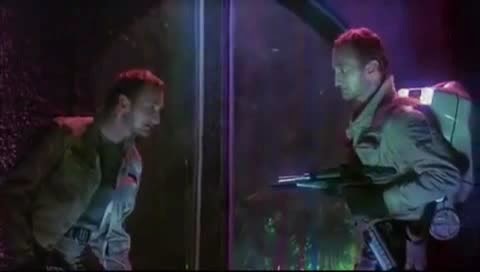 “I live and I die by the crystals.” While things get off to a brisk start, once the endless 'I wonder what is down this corridor' walking about begins, the film begins to slow – albeit with intermittent moments of gore-splashing violence. The high-minded esoteric ideas that the movie is founded upon are ultimately rewarding, but they make for troublesome storytelling blocks that threaten to derail Marc Siegler and B.D. Clark's script come the second half. 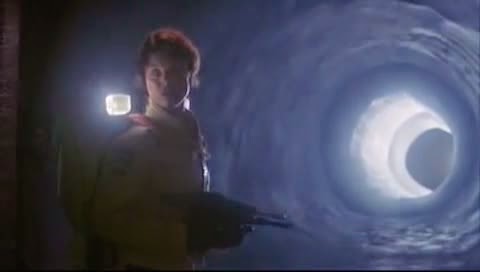 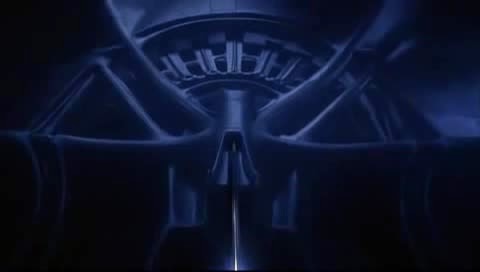 “I'd rather dance on top of this damn thing than squeeze through it.” There is still an awful lot of charm to Galaxy of Terror – from the flashing lights, analogue switches, and CRT monitors filled with flashing read outs on the space craft, to several memorable moments (death by severed arm!) – that mostly excuse its weaknesses. Not everything works, but all involved are given a little something to work with in a film that isn't afraid to combine outré shocks with literary introspection. In space no-one can hear you scream – or craft a knock-off – but it's all good fun in the end.
Posted by Nick Thomson at 11:49