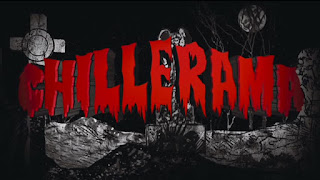 “What I want to know is what the sweet scent of Satan's scrote is going on here.” Anthology horror – as well as horror heyday nostalgia – has been in rude health in recent years. Case in point: Chillerama – a goofy horror comedy that takes a love of Drive-In movie-going memories and splatters it from head to toe with blood, guts, puzzling blue goo, and an awful lot of the, not only brown, but white stuff for good measure! Featuring Werebears, a nymphomaniac Eva Braun, an enormous killer spermatozoa, and an outbreak of horny zombies – which accounts for just the tip of the bizarre idea iceberg – Chillerama is, to put it mildly, just a little bit strange... 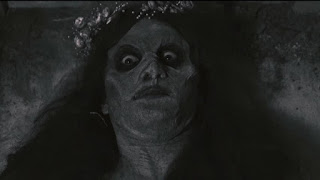 “Well I'm thinking it's time for a little bit of dead head.” Considering that the film opens – in the style of a 1950s horror cheapie with Ed Wood production value (wobbly fake grass, ahoy) – with an aggrieved widower digging up his despised, and decidedly deceased, wife in order to put his bits 'n pieces somewhere they shouldn't – only to have his yambag munched off – it's fair to say that the tone has been firmly set at scatological. 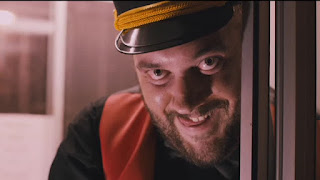 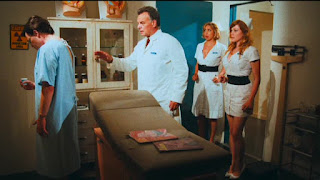 “I don't know, Orson, looks like last licks for us old bones.” It's the final night of cinematic mayhem at Cecil B. Kaufman's drive-in movie theatre – brought down by High Definition TV and Video On Demand – and the old lover of the silver screen (Richard Riehle, Office Space) has dug up some curious celluloid creations hitherto unseen to delight his popcorn munching audience. 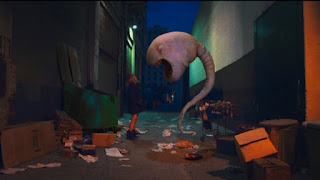 “The military is doing its best to determine what it would take to rub one out of this size.” First up is Adam (Detroit Rock City) Rifkin's Wadzilla, a spin on all those 'science gone wrong in a big, bad way' schlockers of the mid-20th Century, that concerns Miles (Rifkin) – a lonely office drone with a woeful sperm count. However, Doctor Weems (an impressively game Ray Wise, Robocop) has an experimental medicine for the nuclear age that might just do the trick – but who are we kidding, things don't quite go according to plan! 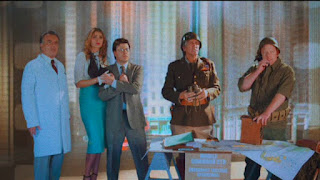 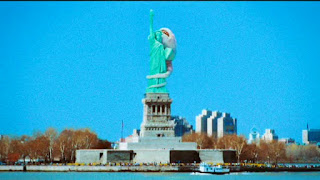 “There's not an ovum on earth big enough for that thing!” Unfortunately for Miles his new pills come with an inconvenient side effect: whenever he gets turned on he suffers a crippling pain in his fun zone – something which turns his blind date with Louise (Sarah Mutch) into a desperate, militarised race to destroy his city-destroying willy worm before it devours the planet! Quite possibly peaking early in the outlandish stakes, Chillerama's first tale boasts more infantile innuendos than you can shake a strip-teasing Statue of Liberty at (seriously). Plus, in a treat for genre fans, stop motion effects from the Chiodo Brothers breathe Harryhausen-esque life into the slimy slithering beast. Frenetic in its style – film grain, dutch angles, dodgy rear projection, chain smoking – Wadzilla proves to be a high point that the second story just can't top. 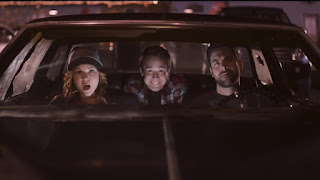 “If nothing else I've gotta purge this urge!” Tim (2001 Maniacs) Sullivan's I Was A Teenage Werebear sounds good on paper – a spoof mix of the 'beach movie' craze with Rebel Without A Cause by way of The Wolf Man – but the results, laden with clunky comedy song interludes, turns out to be a bit of a wet blanket. It's 1962 in California and Ricky (Sean Paul Lockhart) is about to get lucky with his gal Peggy Lou (Gabrielle West) just before a day of 'school at the beach' is about to kick off, but when they're interrupted Ricky doesn't seem quite as irked as Peggy Lou, much to her frustration. 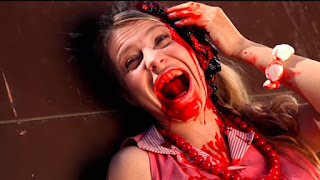 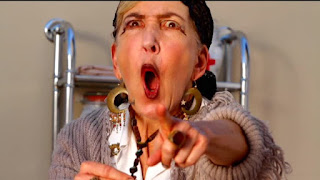 “It was your bite; my ass!” Turns out Ricky is struggling with his sexual identity, something which James Deen-alike Talon (Anton Troy) and his gang take a keen interest in. Ricky's confusion only gets more out of control when he's bitten and becomes one of Talon's gang of 'Werebears' (gay werewolves, essentially). The idea is intriguing, but the execution falters – especially sandwiched between the two most convincing (and visually arresting) segments – further hindered by a lack of focus and a slow pace, which contributes towards Chillerama's somewhat overlong feel. The tone is suitably goofy, but a few clumsily implemented elements – particularly the love 'em or hate 'em musical moments – unfortunately makes Werebear the stumbling block of the anthology. 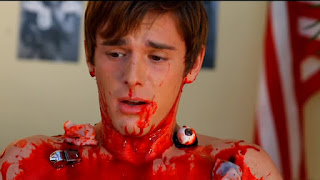 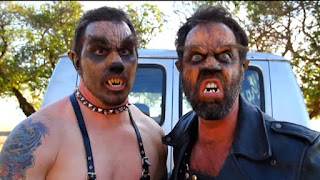 “Silence! Mercy is not in my vocabulary.” The trickiest prospect out of the four tales comes next – The Diary of Anne Frankenstein – which, as Adam (Hatchet) Green admitted, could easily have become a crass and hugely offensive bum note. Fortunately, layered in absolute silliness as it is, this story of Hitler crafting a monster (played by horror icon Kane Hodder) in order to take over the world rivals Wadzilla for crazed invention and belly laughs. 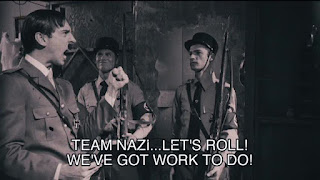 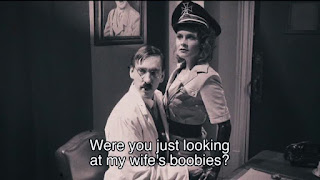 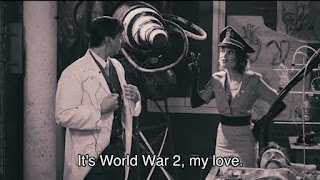 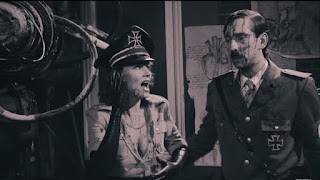 “In other words, what you're about to see will make you shit – a lot – buckets of excrement!” A slight detour in the form of 'Deathication', as presented by a deluded 'Fernando Phagabeefy', takes the Joe (Everly) Lynch's wraparound story of Zom-B-Movie to the logical conclusion of the film's generally scatological nature just when you thought this anthology couldn't get any weirder. The final night at Kaufman's drive-in is drawing to a close, and among the audience are nerdy boy Toby (Corey Jones) and nerdy girl Mayna (Kaili Thorne), but a batch of blue-goo infected popcorn (don't ask) has unleashed an army of ravenously rapacious zombies! Can nerdy boy Toby get the girl and save the day in this quote-riffing, cine-literate tale of young love which blossoms into a gloopy, glowing, undead orgy of all-consuming proportions?! 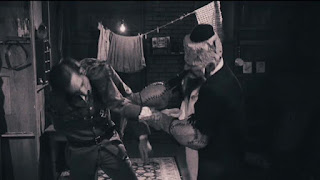 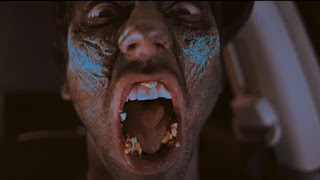 “Rosebud motherfucker!” Crammed full with references and numerous them-from-that-thing cameos (including Lin Shaye, Eric Roberts, and Ron Jeremy), Chillerama – much like any anthology – isn't all gold and, at times, stumbles and slows. However, with this many insane ideas and this much love for B-Movie zaniness, the good considerably outweighs the bad. 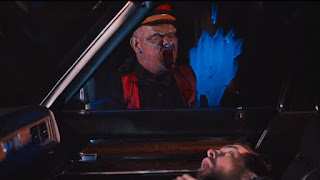 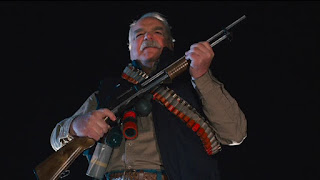 “Hooray for boobs.” Image Entertainment's 2011 Region 1 DVD comes with an audio commentary, a selection of deleted/alternate/test scenes, interviews, and a couple of informative making of featurettes. If you're a fan of the cheap and cheerful exploitation fare of yesteryear then you won't go far wrong with this outrageously daft slab of splatter, sleaze, and silliness.
Posted by Nick Thomson at 17:47