“It's not uncommon for a man to do strange things to get his kicks.” The opening companion piece to Miraglia's 1972 gothic-tinged giallo The Red Queen Kills Seven Times, The Night Evelyn Came Out Of The Grave treads similar ground to its successor. Miraglia juxtaposes the old and new worlds whereby the cutting edge design of the 1970s sits amidst a crumbling ancestral home built from stone and sordid family secrets. Riddled with nihilism, this forever-twisting tale of a sadomasochistic fetishist and his not-quite-so-dead wife is soaked-through with moral decay... 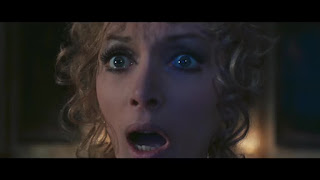 “In case I get a particularly violent attack I left my instructions with my solicitor.” A crazed man bursts out into the gardens of a private estate – in fact a psychiatric clinic – and is pursued by men in white who spill out over the lush green grass. His attempt to break free is all for nought, and yet a while later he is once again free and, seemingly, sane. This is Lord Alan Cunningham (Anthony Steffen, Hotel Paradise and a whole slew of Italian westerns), a well-to-do rogue in a green velvet suit at the wheel of a sports car (all a bit Austin Powers in hindsight). In search of sordid fun he picks up a local prostitute – Polly – and splashes the cash to entice her back to his rural home, a slowly decaying castle, but not before he sneakily changes the license plates on his car. Unsurprisingly, Alan has his kinks, much to Polly's knowing lack of surprise, but his medieval torture room isn't just for show. Bound to a trestle in thigh high leather boots and not much else, poor Polly is whipped mercilessly and killed while Alan stumbles into a psychological fugue. Who is the red haired woman scampering through the woods, and who is the silent voyeur watching Alan commit his heinous deeds? 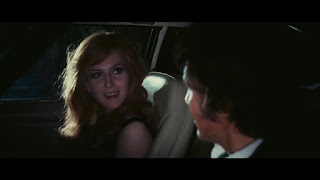 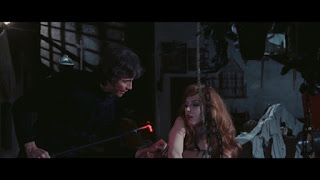 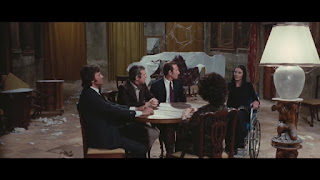 “Everybody laughs at the beginning, but I promise you, Miranda will make you laugh on the other side of your face.” As it transpires, the mysterious woman is Evelyn – Alan's deceased wife – and the voyeur is Albert (Roberto Maldera), Alan's grounds keeper and brother-in-law. Alan has been plagued by mental breaks relating to the death of his wife and has chosen – with the help of his curiously young-looking Aunt Agatha (Joan C. Davies) – to conduct a séance to put an end to it. His Doctor warns against it, but turns up a moment too late to see the vision of Evelyn hover above the table as the guests – Alan's cousin George (Enzo Tarascio, The Designated Victim) included – watch on. Overcome, Alan faints, but refuses to leave the cursed castle and opts to indulge his desires, at George's behest, at a local men's club. 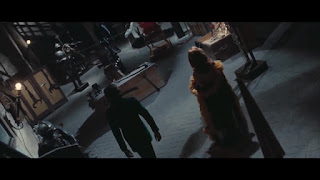 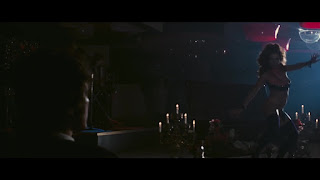 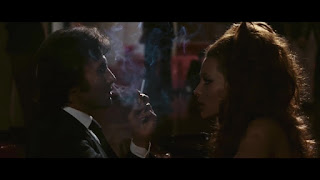 “Whenever I'm offered a gift such as yours that's so generous I expect the unusual.” Rising from a coffin arse-first, and proceeding to conduct a scintillating dance for a host of adoring fans, Susie (Erika Blanc, Kill Baby, Kill) – with her shock of red hair – quickly raises Alan's spirits. He offers her £1,000 to spend the weekend with her, and so Alan's pathological routine recycles … but Susie makes a run for it. Alan gives chase, corners her in the family crypt (with its mysteriously half-open tomb), only for a vision of Evelyn to overwhelm him. The following morning she's nowhere to be seen and Alan, nor anyone else, has any idea where she's gone. Advised by his Doctor to re-marry, Alan meets Gladys (Marina Malfatti, Seven Blood-Stained Orchids) and falls madly in love. They tie the knot and new life is breathed into the Cunningham castle – but a mysterious red head and a foreboding portrait spell doom for the future. 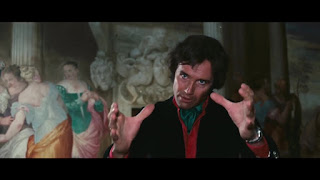 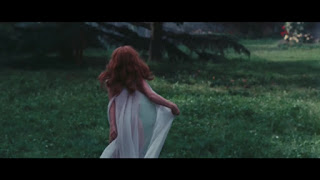 “You think with your money you buy anything you want, but it's not how it is! / Everything, no – but your conscience, yes.” Scripted by Fabio Pittorru, Massimo Felisatti, and Emilo P. Miraglia, The Night Evelyn Came Out Of The Grave plays within a decadent world and pulls the key players down to wallow in the muck. Set within grandiose rooms dominated by ornate candlesticks and luxurious fresco paintings, Miraglia's fascination with crumbling aristocracies is unleashed with a sly and vicious bite. There are few good guys on offer, quite befitting of a film in which the main character is a psychotic murderer, with only the servants providing a glimmer of moral resolve. However, even among their ranks – all “Yes, M'Lady” reverence – money speaks loud and clear, and you get the feeling that if given enough screen time they too would be up to no good. Albert – Evelyn's brother – is a clear indicator of this, witnessing multiple murders without informing the police and being bought off for as little as £30. He's not the sharpest tool in the box, either, as Alan is the one who has to suggest a bribe of £1,000! Suffice it to say, the film proffers a dim view of humanity, especially Alan and his well-heeled family. There is no honour among thieves, murderers, voyeurs, and these repellent layabout liars suckling at the teat of Alan's £3 million fortune. 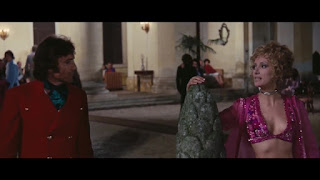 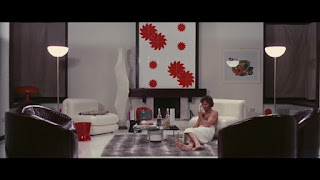 “I'm sure she's just the girl for me, she makes me feel human again.” Even with more liberal cinematic tendencies creeping in, the display of unusual sexual practises must have pushed the boundaries at the time of the film's production. From Marina Malfatti's array of skimpy nightwear to the flesh-baring sessions inside Alan's torture room, Miraglia's film may be somewhat light on murderous detail (a pack of foxes consuming a corpse, aside), but it luxuriates in the female form whenever the plot dictates. However, it's not all about lascivious thoughts, as Miraglia – much like he would do a year later with 1972's The Red Queen Kills Seven Times – decides to fuse chic modernist design with old school gothic horror theatricality. Piles of discarded furniture are draped in cobwebs, flashes of lightning reveal ghostly visions, and rats slither about within cold stone tombs. Meanwhile, the cast flaunt about in the height of fashion and attend glamorous parties for the hip and the happening, before ethereal voices emanating from the mist entice us back the other way again. 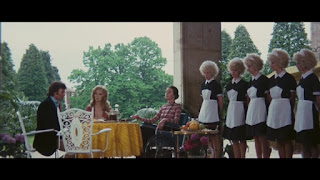 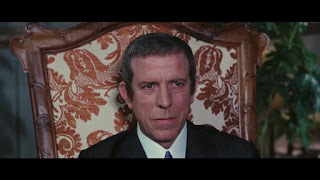 “I have too many bad memories of this place.” In typical giallo fashion, though, the devil is in the detail and a succession of climactic twists come thick and fast to stretch plot credibility to the edges of reason, but fortunately it all holds together. There is a strange quality to both of Miraglia's culture-clashing gialli, but the allure is undeniable with both Evelyn and Red Queen casting a very particular spell upon the viewer. While some of the finer details are occasionally askew (Steffen is, perhaps, not quite as comfortable here as he would have been in a spaghetti western) and the film's age is apparent, fans of these beautifully photographed and intricately plotted murder mysteries will discover plenty of treats to enjoy. 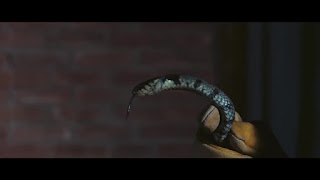 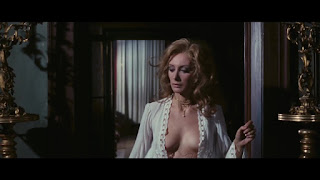 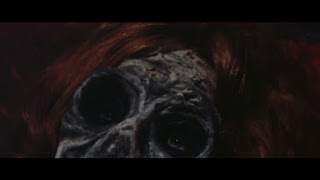 “No, I don't believe in ghosts, if that's what you're asking me.” Arrow Video's 2017 Blu-Ray – a stand alone release after the deluxe box set that featured both The Night Evelyn Came Out of the Grave and The Red Queen Kills Seven Times – is, much like its counterpart, a solid presentation. The special features leave a bit to be desired, it has to be said, as a new interview with Erika Blanc treads much the same ground as her archival interview (although her wry sense of humour entertains). Similar to the Red Queen interview with critic Stephen Thrower, a big chunk of the plot for this film is recounted, but some interesting factoids are dispatched at a relaxed pace (note the jump cuts to edit out the silent moments). There's an archival interview with production designer Lorenzo Baraldi, which curiously looks like it's been filmed through a murky screen door, where he rambles on for twenty minutes while barely taking a single breath as his anecdotes about the film and his wider career journey in all sorts of directions. So, nothing to really write home about nor revisit, but the new 2K restoration looks and sounds very tidy indeed – and you can play the film in either English or Italian languages with optional subtitles.

N.B. Screenshots are captured from an alternative source and not the Blu-Ray (as I don't have a BD-ROM drive).
Posted by Nick Thomson at 11:39