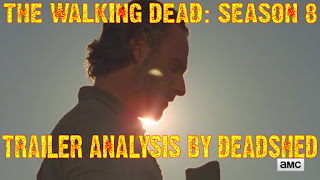 It's that time of year again – San Diego Comic-Con – and, naturally, that means the trailer for the new season of The Walking Dead!

Now, as I've written about before, Season 7 undoubtedly had some problems – however, the show makers have proved in the past that they do listen to fans' concerns and make changes. I've read a few interviews with Scott Gimple (the show runner) where he has stated that not only will the pace of the 8th Season be ramped up, but the structure of the storytelling will be changed. In other words, aside from the possibility of a flashback episode detailing Negan's back story, the 'isolated episodes showing just one character/story' are out. These stand alone episodes can work in moderation: The Governor's flashback episodes in Season 4, for example, or the episode in which we saw how Morgan came to regain his sanity and find a path to peace, or indeed, 7x02 in which we follow Carol and Morgan as we were introduced to The Kingdom (with a satisfying conclusion at the end, justifying Ezekiel's more outré characteristics).

Season 7's biggest problem was definitely the structure, which made the overall story feel fractured with main characters disappearing for a handful of episodes at a time while the writers played for time in-between the premières and finales, sapping considerable momentum. The low point for all this? Episode 7x06: the Oceanside episode – Tara couldn't carry the weight of introducing the third new community of people inside five episodes after The Kingdom and The Sanctuary. Indeed, the introduction of those scumbag trash pile people (lead by the irritating Jadis) proved problematic for the back-half of the seventh season, too.

Anyway – enough of that, because Season 8 is shaping up to be an exciting thrill ride that will reward viewers' patience. All Out War has been declared and the battles are upon us!

Click “READ MORE” below to see what's what in the Season 8 trailer...

A storm is brewing. “I hope you got your shittin' pants on,” goads Negan (continuing his fascination with scatological banter) while he and Father Gabriel linger in a darkened room with the living dead surrounding them. What landed them both here? Time will tell, but what we do know is that there are three leaders representing the respective armies of the Allies: Rick (for Alexandria), Ezekiel (for The Kingdom), and Maggie (for The Hilltop). “The bigger world is ours by right,” and so forth. Inspiring, blood-pumping speeches are heard from all three.

Preparations: We see a procession of vehicles with sheets of metal mounted to one side to provide cover during gun fights, and various shots of people (including Rick and Carol) sneaking through empty corridors – is this inside Negan's compound The Sanctuary, or some of his outposts? After the arrogant rush to take down an unknown enemy in Season 6 (at the satellite station) it seems that Rick & Co have very much learned their lesson as coordinated attacks on enemy outposts are glimpsed.

Further to this, we see prisoners of war marching in shackles. An earlier shot shows a vehicle moving slowly with Tara on the back, pretending to shoot at someone, which matches with this shot. Therefore it's safe to say these prisoners will be from the Saviour's side, likely rounded up from the Allies' raids on Negan's outposts.

Elsewhere we see Jesus planting bombs under cardboard boxes to disguise them. I wondered why he wasn't using weathered-looking boxes, but it would appear that Daryl targets these same petrol bombs later in the trailer – is he amassing a swarm of walkers to cause trouble for their enemies? We do see a shot of Carol and Tara hanging out on a freeway overpass as a herd of walkers shambles on beneath them.

There's going to be a hell of a lot of people battling each other, so how are they going to know who's who? Simple: In one shot Daryl & Tara are seen with white bands on their right arms against black shirts. They stand alongside Morgan and Carol, the latter of whom has an orange band on her right arm (Morgan is without an arm band, but is later seen with an orange one). In another shot we see Maggie with a green band on her right arm – this suggests 'team colours' to help them all differentiate who is who during battle. Team Rick: WHITE, The Kingdom: ORANGE, The Hilltop: GREEN (also note that Maggie's surname is Greene, emphasising her assumption of leadership at that location). “I've been fighting since the farm,” she says, “can't stop now”. Having recovered from complications, and still early in her pregnancy, Maggie's in the fight. She also speaks of the importance of everyone working together (how timely!), and we see this sort of coordinated action throughout the trailer.

Speaking of Morgan, where is he morally in all this blood-letting? Morgan and members of the Kingdom infiltrate what appears to be an outpost similar to the one Team Rick raided in Season 6. Note Morgan's shaved head and black shirt – is this Morgan in war mode, having realised he can't stand idly by and allow evil men to live in the apocalypse? Events in the back half of Season 7, particularly the loss of his young protégée, tie-in with this, and he even shoots a silenced pistol without a second thought. Interestingly, we see him going toe-to-toe with Jesus – is this mere sparring, or an actual dispute? Does he struggle with having to wear his war face? Similarly, Carol's back in action! However, in true fate-tempting fashion, Morgan states “I don't die” … yeah, we'll see about that, chum. Might he be a big-name casualty of All Out War? It could be a suitable place to conclude his story ... we'll see.

Morgan and Carol both experienced trouble dealing with the consequences of their deadly actions, but might this also be weighing on Daryl's mind? Remember how he smashed Fat Joey's brains in with a baseball bat when he escaped The Sanctuary? At one point we see a black pistol with 43 notches on it – a gun that looks similar to the one Daryl uses to blow up the petrol bombs. If this is the case, will Carol be able to counsel Daryl? We certainly see the two key players in this most chaste of relationships together at various points during the trailer.

Speaking of coming back from the brink and so on, it appears that Dwight will indeed be fighting against Negan from the inside. He receives a secret note stating “tomorrow”, likely letting him know when it's all going to kick off grand style.

What else? Maggie vs Gregory – a major arc in the comics – and one that was put into motion in Season 7 looks like it'll play out on-screen. Notice how Gregory is somewhat pushed to the side while Maggie takes centre stage. Shiva vs a rabble of walkers? Yes please! Negan looking pissed off? Well, you would be if your men were being taken prisoner and your grasp on power was slipping. At another point we see a gathering of the so-called 'Heapsters' (as fans of the show have derisively opted to name them) at the junkyard surrounding a guest (or unwanted intruder). Could it be Rick? We see someone stripped bare and locked in a storage container – and it appears to be our main man. Notice the earlier shot of an eye peering through a bullet hole in a container door. Another thing to flag up is that this rabble of trash divers aren't seen with a band of any colour on their arms – they'll hop into bed with anyone for utterly selfish reasons. Is Rick going to have one last go at getting them on-side? Will The Saviours betray them? To be honest, I'd be totally fine with that bunch of Mad Max cosplayers not surviving the war.

Finally though, there's that post-title reveal of Rick with grey hair and a fairly long grey beard, lying in a white bed with flowers beside it. Some comments online – clearly from those who haven't read the comics – are already crying fowl that “it was all a coma dream!” Well, no, and here's why:

A FEW FUTURE PLOT DETAILS AND COMICS SPOILERS AHEAD!!!

Not only does 'it all being a coma dream' make no sense (because it would mean an end to a highly profitable show), notice the walking stick – this belongs to Rick. Why? In the comics he is seriously wounded in the leg during battle and cannot walk without it. After the climax of All Out War there is a time jump of a couple/few years – hence the grey hair and beard (we haven't had a significant time jump since the opening of Season 3). Indeed, comparing Rick at the beginning of the trailer to Rick at the end of the trailer suggests that the time jump could be significant. The show has closely followed many major plot lines from the comics over the years, so it is highly likely that Scott Gimple & Co will be maintaining these developments as the survivors attempt to forge a new world from the ashes.

The Walking Dead returns October 22nd 2017 for the Season 8 premiere and the beginning of All Out War.
Posted by Nick Thomson at 17:53