A while back I accidentally wrote a novella called "How Mr Snuffles III and Others Met Their Maker". I say accidentally because it had started out as a short story which then grew into a novella on-the-fly. I found myself hopping back and forth inserting new passages and ideas and it was one of the most 'free-wheeling' instances of writing that I have experienced thus far.

It is a black comedy about an orphaned pet therapist/serial killer aficionado who teams up with a gifted taxidermist to explore the limits of love, death, and psychopathy ... so yeah, the jettest of jet black comedies. 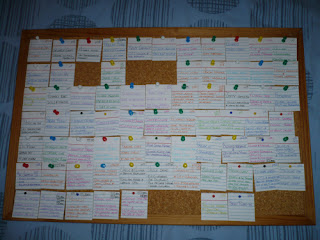 A nearly complete version of the layout/guide.
There's nothing quite like a good old corkboard with actual, physical index cards and pins.

Anyway, a while after writing the novella I had the idea of converting it into a script, but various other things I wanted to write slid in first until now, a couple of years down the line. I've returned to it for a little bit of creative writing fun to kick off 2018. With a fair bit of groundwork already done in writing the novella, I figured this would be a project I could hammer out efficiently...

Click "READ MORE" below to continue and also see a little sample...

Now, that's easier said than done, especially when you have to adapt the story into an entirely different format and reorganise numerous scenes to fit into the rhythm of a screenplay's three act structure ... not only that, but I had to figure out various new scenes to fill numerous details that are either skimmed over, or missed out entirely, in the original text. 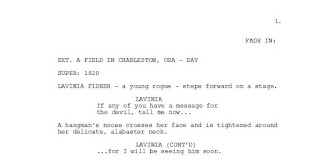 The first scene: part of a wrap-around story.

Never knowingly in the business of making things easy on myself, the story involves lots of facts and figures, names and dates, and it treads a delicate tonal line ... plus we tend to jump around in the protagonist's time line a fair bit. Similar to For Want Of A Nail, the audience is moved about like a chess piece criss-crossing here and there in the pursuit of telling the story. Of course, the benefit is that you get to have an awful lot of fun playing around with expectations and juxtapositions, and the God-like nature of being a writer extends further as you proceed to destroy the very essence of time itself - linearity.

So, after some structural planning last month and mapping out some finer details over the last few days (while getting over this absolute stinker of a cold that I've endured since Boxing Day), I got down to the actual business of hammering at the keyboard today - and we're off to a good start: 8 pages. Hopefully the rest of the writing process goes as smoothly as this, after all, doing that script version of Murder at the Grindhouse (adapting a portion of my in-progress novel) in September/October proved to be an energising venture.
Posted by Nick Thomson at 17:29