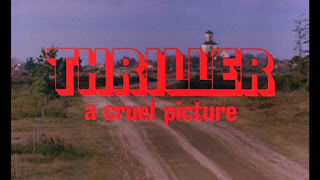 “You better start praying, One Eye.” Perhaps better known under the title They Call Her One Eye, Bo A. Vibenius' stripped-back revenge thriller is an unusual sight to see come from Sweden, where serious art house cinema is more the norm. Mixing overt stylistic flourishes with hardcore sleaze, the tale of Frigga – a mute young woman recovering from a horrific ordeal in childhood – proves to be a tough but rewarding viewing experience, wrought from highly charged emotion and brutality... 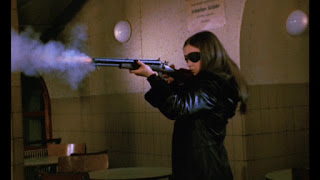 “I feel sorry for that poor girl, shame, they say she'll never talk again.” Beginning almost like a fairytale, as autumn leaves flutter to ground and a young girl plays with her apparent grandfather, the curious dream-like quality shifts into a sudden and disturbing nightmare – viscous chewing tobacco ooze drooling profusely from the old man's mouth. What transpires off camera – as we, the viewer, are thrust into the perspective of the victim – is a crime that will forever scar the psyche of the young girl. Now, fifteen years later, Frigga (Christina Lindberg) is rendered a mute working on her parents' farm. While her innocence was tarnished so horrifically, her naivety remains as she accepts a lift from a stranger when she misses her bus into town for another, seemingly hopeless, therapy session. 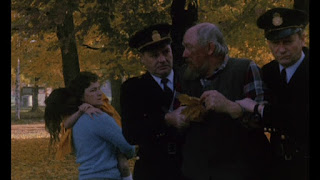 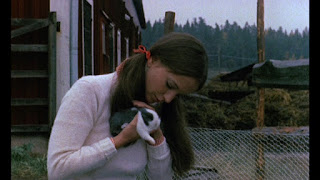 “I know a lot of chicks, most of them don't know how to keep quiet, but I think you just set a new record.” Tony (Heinz Hopf) is a flash man, smartly dressed and sporting about in his slick car, but as soon as he equates Frigga with accessories for his vehicle, the danger of inevitability begins to rear its ugly head. Perhaps feeling isolated back home, and with seemingly no friends to speak of, Frigga accepts dinner from Tony and winds up back at his place – where he wastes no time spiking her drink before proceeding to get her hooked on heroin, a violation made all the scarier by the fact that he has done this before with numerous vulnerable young women in the past, all of them so distinctly unlucky to have fallen for his surface charms. 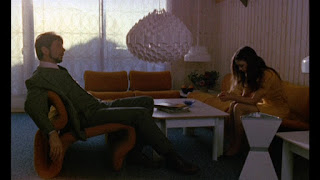 “Well baby, you begin a whole new life today.” Thrown head first into the sordid world of forced prostitution and bound by an addiction to a strong level of heroin inflicted upon her, Frigga still finds some initial resolve (she viciously claws the face of her first 'client' to a disfiguring degree) but her ordeal is only just beginning. In the film's most shocking scene, Tony wrestles her to the floor and blinds her in one eye to snuff out her inner strength, the moment (shown in unflinching extreme close up) is so convincing on-screen that it could only have been achieved with an exceptionally realistic fake head with a real human eye inserted into it or – as the legend goes – an actual dead body. Either way, the moment is so effectively visceral that even seasoned exploitation fans will squirm and wince with revulsion. Suffice it to say, but the infamous eye-splintering scene in Lucio Fulci's Zombie Flesh Eaters gets shoved firmly into second place! 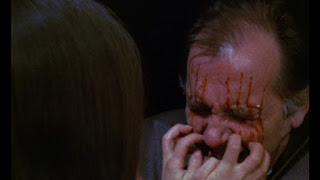 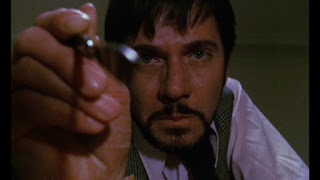 “I know what you're going through, it's always worse at the beginning.” As if things couldn't get more bleak for Frigga and her fellow victim Sally (Solveig Andersson), two personal tragedies clobber our would-be heroine with such a punch that there is nothing left to lose – and vengeance is now all that consumes this once unassuming farmer's daughter. Gradually learning a host of new skills – martial arts, firearms, and advanced driving – Frigga's resolve continues to harden as she endures a succession of visits from regular 'clients', people of power and importance who should know better, but clearly care not one little bit for the plight of the people they're using for their own kinks. Indeed, the bleakness of Frigga's situation is emphasised in a rather unique way – even for exploitation cinema! 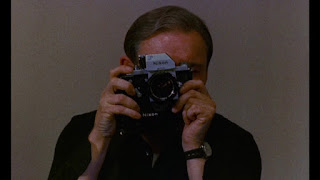 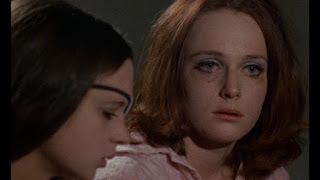 Thriller was made during the era of 'porno chic' and so, with biological bluntness, the reality of sex is laid unquestionably bare. Undulating ballbags and puckered bungholes are slammed into the middle of the frame with a disturbing matter-of-factness as the atonal score escalates each time we are presented with a hardcore cutaway. Yep, that finger is going there, and nope, that ain't mayonnaise. So, as Frigga's plight becomes more desperate, more like meat on a factory line, Vibenius uses increasingly graphic inserts to mirror her almost hopeless situation. However, the reign of selfish terror inflicted upon her is about to come to a screeching halt as Frigga gears up – replete with eye patch and black leather trench coat – and sets out with a double barrelled shotgun to tear down these brazen criminals. 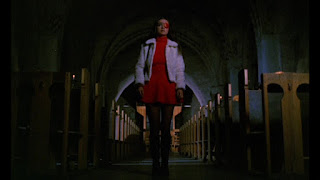 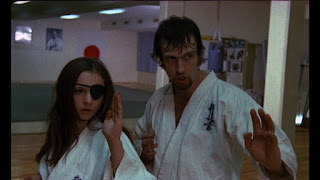 “Without our little girl we have nothing to live for.” Revenge is a dish best served ice cold and without equivocation, and Frigga is nothing short of dogged in her quest for absolute justice on those who have wronged her and those she cares about. It is at this point that Vibenius' flair for ultra slow motion violence kicks into high gear – Lindberg lunging, twirling, and blasting lead with balletic poise and otherworldly smoothness – as the blood of the unworthy explodes from bodies with savage precision. Indeed, the slow motion sequences – scored with minimal and dissonant echoing tones – hammer home Frigga's clarity of purpose and silent efficiency, the relative quiet of these and other scenes akin to the character's inability to speak. And yet, as the saying goes, actions speak louder than words. 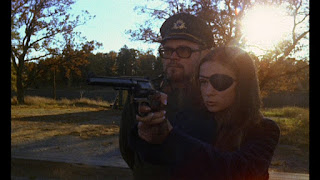 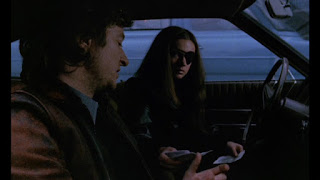 Lindberg deserves much praise for her haunting portrayal of Frigga, particularly as she doesn't find herself limited by her mute character or petite stature. From kicking the crap out of two policemen (dig those arcing ropes of glistening blood) to creating hard-charging chaos on the roads (the messy madness of violence), Lindberg absolutely nails the role with determination, and yet never loses sight of the subtleties. Despite all the arse-kicking and firearm frenzy, Lindberg's soft features deftly convey a huge journey for her character, her expression shifting ever-so delicately from naïve farm girl to despondent victim to calculating killer. We, the viewer, can simultaneously champion her extraordinary resolve and fear her deadly focus. In no uncertain terms, Lindberg pulls off one of the most impressive performances in the annals of exploitation cinema. 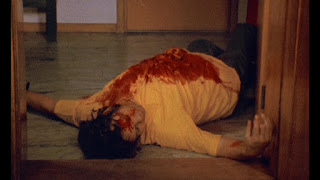 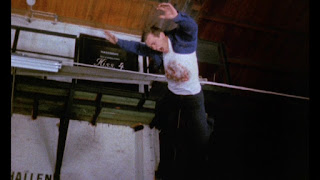 “He never even went to prison. What kind of laws we got anyway?” There's a pervading sense of nihilism and of absolute corruption throughout Thriller, where official law and order is shown to be ineffective, yet unbridled vengeance is revealed to not be without collateral damage and self-inflicted pain. The story unfolds through a frequent use of POV shots, hurtling the viewer across all roles – Vibenius grabs us by the scruff of the neck and turns us into the victim, the abuser, and the voyeur, switching back and forth throughout. Some of the film's most impressive themes, though, might fly under the surface-level carnage. The tragedies of Frigga's life are presented as cyclical, almost seasonal, as her pain in adulthood comes crashing down upon her in an autumnal park just like it did when she was a child, moments prefigured by glaring innocence. However, even these cyclical moments are challenged by powerful reversals. Frigga begins the film in the passenger's seat only to end it quite literally in the driving seat of a commandeered police car, her as the avenging angel riding into the desolate distance as the wind howls and the thrums of thunder promise nothing better than uncertainty. Such an aesthetic, borrowed from the new breed of American western that was hitting the screens at the time (whereby 'white hat/black hat' simplicity gave way to morally bankrupt grey areas, where easy answers were gunned down with savage immediacy, and purity had no meaning) paints a thoughtful picture. 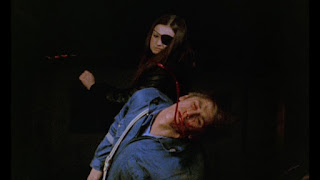 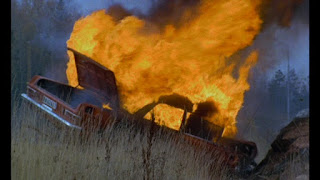 “There's not much more I can teach you.” While Thriller has maintained a relatively low profile in the world of exploitation cinema, swept aside by bigger names on the block, it is not as if the film hasn't left a mark. Quentin Tarantino took inspiration from Frigga's eyepatch-matching ensembles and ruthless nature for Elle Driver in Kill Bill, while Jason Eisener's Hobo With A Shotgun mimics the title font of the American release and, most obviously, performs a version of Thriller's ingenious final kill (involving a noose and a hungry horse straining for its feed, left just out of reach). 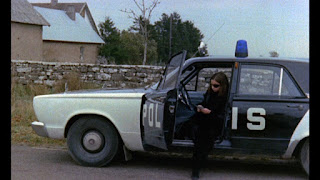 “Ow! Easy lady!” Vibenius' film is not without faults, though, as the 107 minute running time feels 10 minutes too long, with a smattering of scenes seeming a touch stilted due to a lack of coverage – a few shots lingering just a smidge too long. However, these moments of weakness are swept aside by the film's considerable strengths from an iconic central performance by Lindberg to the crisp, matter-of-fact aesthetic of the film – the stark sight of Frigga waiting silently for her quarry in a barren and windswept landscape sends shivers down the spine. Aficionados of exploitation cinema would be well advised to seek out a copy of this little gem that has been lost in the shuffle too often, and once seen it is not easily forgotten. 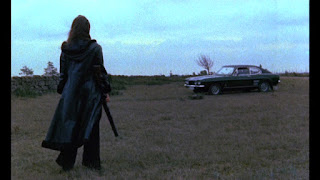 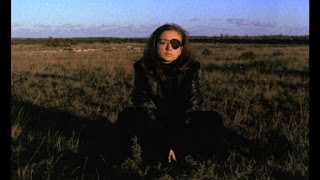 “Only two more big ones for all this, you know how expenses are going up.” This is a review of the 2004 Synapse 'Limited Edition' DVD with the red cover, the difference to the 'Vengeance Edition' with the yellow cover that followed shortly after being that this version with the red jacket is the fully uncut version – all the gore, all the sex (check out MovieCensorship.com for a detailed comparison). At the time of writing the film has yet to gain a HD restoration, so for now your best bet is tracking down a DVD floating around in various marketplaces out there on the web. Audio and Video quality are both respectable, with the look of the film maintaining a fairly grainy nature with some scenes appearing a little on the too-dark side (e.g. Frigga's slow-mo take-down of two coppers). Extras are limited, but extensive image galleries, some alternate footage, trailers, and language/subtitle options give you something to enjoy.
Posted by Nick Thomson at 17:31