What with the festive season this one got kind of buried - so, better-late-than-never, have at it. 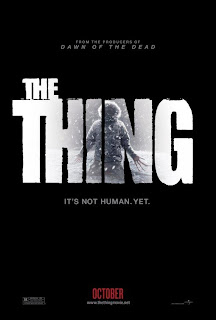 When I first heard rumours of a new version of The Thing (why on earth they couldn't call it, for example, 'The Thing: Outpost 30', or whatever number the Norwegian Camp was, is beyond me), I thought what most other fans must have thought - oh no, here comes another remake ... however, that's not the case, for the most part. When is a remake not a remake? When it's a prequel - a prequel that can't decide whether it's a prequel or a remake, that is.

Filling in the blanks of what happened at the Norwegian Camp, as visited by some of the members of Outpost 31 in John Carpenter's masterful sci-fi/horror/suspense flick from 1982, this 2011 remake-that-isn't-a-remake continually suffers from the one key problem that plagues almost all prequels - we already know the outcome.

Yes, those who haven't seen the superior 1982 film won't be so bothered about this, but on the other hand they won't get any of the nods and winks towards Carpenter's film - which really, when all is said and done, is the only real reason to bother watching this movie.

It's not all that bad, but it's not all that good either. Mary Elizabeth Winstead's Kate Lloyd (a Paleontologist) is whisked to Antarctica to help dig up something that has been found in the ice. Accompanied by box-ticking Americans (and a Brit, for some strange reason), she and the Norwegians venture inside the ice-bound alien spacecraft (which is sorely underwhelming on both visits during the movie) to have a look-see before dragging an occupied block of ice back to camp.

Then the obvious series of events happen - events that won't surprise anyone who has seen the 1982 film.

Prior to the release of the movie, after fan concerns about the use of CGI, there was a lot of championing of the practical effects used on this new one - this immediately got my suspicions on alert. Sure enough, while there are some practical effects on display (one example is an impressively detailed, but not Rob Bottin-level icky, autopsy sequence), the vast majority of effects are CGI ... and subtlety hasn't been employed - at all. Anything that was once practical and needed to move on-screen has been either entirely replaced by CGI creations, or has been so covered-up by layers of CG-tweakery, that it all just looks like it was never anything other than CGI ... i.e. the fan fears are most definitely founded regarding that aspect. It's most disappointing.

CGI aside, little attention has been paid to the methods of the titular nasty - in this 2011 version it doesn't give a stuff about being stealthy. No, what we have instead is a creature that's ever-so-ready to reveal itself (slowly, in leering close-up, so we can all examine how marvellous the pixels apparently are) and make a load of racket. Add in some plot holes, an iffy twist regarding "non-organic material", and a cast of characters that are more-often-than-not interchangeable or forgetable, and it all adds up to a bit "so what?" Now sure, non-English-speaking Lars (who becomes very important) and wild-eyed-and-beardy Jonas (who is annoyingly underused) stand-out, but it's not hard when the other characters make little impact. Juliette is dull, Dr. Sander is the cliched 'bad scientist' to Winstead's 'good scientist', Carter is no match whatsoever for 1982's MacReady, Colin is just a grumpy Brit, Peder doesn't do an awful lot, and Jameson (Mr. Eko from Lost) has three-fifths-of-bugger-all to do throughout ... and that's just the ones I know the names of.

It's a missed opportunity, but then again could it have ever been a truly worthwhile exercise? It does make complete career sense for Winstead to take this flick on (I respect and enjoy her work), but she's never used to her full potential here unfortunately. It's all a bit of a mostly-tension-free damp squib - not terrible, but not much cop either beyond a few fanboy nods and winks to tie it in with John Carpenter's far superior chiller. If you're going to watch The Thing - make it the 1982 version.
Posted by Nick Thomson at 18:53