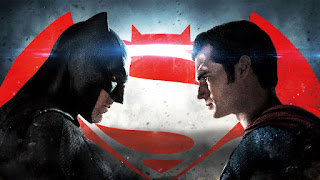 The sales people will no doubt be out there nudging various superhero movie fans in the side - winking up a storm and mumbling a range of suggestive sounds - at the thought of an 'R-Rated' Batman v Superman: Dawn of Justice ... but, as director Zack Snyder has stated several times, unlike Deadpool, there will be no geysers or gore and flashes of flesh. And with word of just a standard issue single 'F-word', it leads to an interesting issue of America's rating system - doled out by the not-so-user-friendly Motion Picture Association of America (check out "This Film Is Not Yet Rated" for more on that).

BvS is getting an extended 'ultimate edition' director's cut - much like Watchmen did - which likewise pushes the running time over three hours. The theatrical version was rated PG-13 in America (for "intense sequences of violence and action throughout, and some sensuality") - and 12A here in the United Kingdom by the now far more open British Board of Film Classification. However, the extended version nabbed itself an R-Rating from the MPAA (no-one under 17) - simply due to added 'intensity' from some extended violence which 'tips the scale', according to Snyder.

Want to know what the extended director's cut was rated in the UK? Does a jump from PG-13 to R in America mean a leap from 12A to 15, or even 18, in Blighty?

As reported by the Melon Farmers website, what the MPAA deemed to now push BvS over the edge into an R-Rating, the BBFC have come to the decision that ... drum roll please ... moves the UK rating from a 12A to ... ... nowhere. It keeps its 12A rating (for "moderate violence, threat, infrequent strong language"). So, the extra thirty minutes in America ostensibly (but not realistically) blocks BvS from anyone under 17 years of age because it's just a smidge more 'intense', but here in the UK it's business as usual for anyone 12 and above - and that's quite right in my view.

Is there a marketing ploy in all of this? *conspiracy tinfoil hat on* Did someone have a quiet word with someone else to push for a 'just over the line' R-Rating to bask in a little bit of Deadpool's reflected glory - especially considering BvS' only-okay showing at the theatrical Box Office? Or is the MPAA system just poorly balanced and in need of a new set of ratings?

Sure, there are differences that switch the other way - The Walking Dead, for instance, is TV-14 in America but is rated BBFC 18 in the UK due to the graphic violence and gore (yet, when it comes to sex and swearing, it would be rated 12). Yes, TV is rated through a different system, but this illustrates the cultural divide between our territories (just look at the different national reactions to Janet Jackson's infamous Super Bowl appearance). Considering that Deadpool is rated 15 in the UK, and R in America, the case of BvS' Extended Director's Cut taking the big leap from PG-13 to R for no solid reason, it seems, further suggests that the MPAA is in sore need of a refresh. That's a five year age gap - the UK's 12A vs USA's R (for 17 and up) - and it makes the MPAA's system look, well, just a bit silly and yearning for a new balance of ratings. I've argued it before, and I'll do so again - perhaps a 12/15/18 setup in place of PG-13/R would be better for American audiences and, considering Hollywood's global reach and how ratings affect film content and Box Office receipts, better for audiences around the world.

I've spoken about the curious, and frankly unwieldy, range of ratings that the MPAA uses when compared to the BBFC before, in regards to Deadpool, HERE.
Posted by Nick Thomson at 18:02