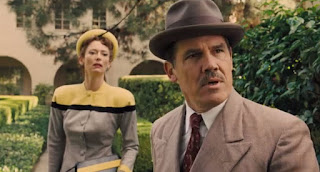 What's it about?
Written & Directed by the Coen Brothers, "Hail, Caesar!" is a comedy set during Hollywood's 'Golden Age' - 1951 to be precise - and follows the trials and tribulations of Eddie Manix - head of production and studio fixer for Capitol Pictures. When the lead in one of the studio's biggest productions is kidnapped by a group calling themselves 'The Future', the curious personalities and practicalities of Hollywood ricochet off one another.
Who would I recognise in it?
Josh Brolin, George Clooney, Alden Erenreich, Ralph Fiennes, Jonah Hill, Scarlett Johansson, Frances McDormand, Tilda Swinton, Channing Tatum, and more. 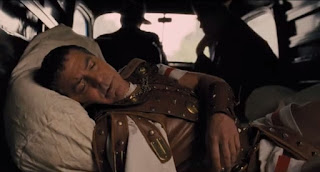 Great/Good/Alright/Shite?
The Coen Brothers march to the beat of their own drum, so it's with no surprise that "Hail, Caesar!" is the sort of film that will require more than one viewing to peel back the intricate layers of wry humour that are laced throughout. Skirting away from some of the strictures of traditional screenwriting structure, the film moves with a loose feel. We see glimpses of disparate productions - all of them elaborately realised - from a stunt-filled cheese-ball western and a synchronised swimming spectacular, to a stuffy melodrama and a tap-dance-tastic sailors-on-leave picture. Indeed, the Coen's love for Hollywood's golden years celebrates with rose-tinted glasses on, while simultaneously playing up the more farcical elements of the time (Francis McDormand's scene as a chain-smoking editor, locked away in a darkened room, proves to be both loving and laugh-inducing)... 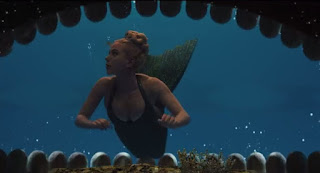 Certain subplots can, at times, feel like they would have benefited from a little more attention and sewing into the core fabric of the main plot, but then "Hail, Caesar!" is more a day in the life of Brolin's studio fixer. Traditional Coen themes of morality loom large here, with Manix orchestrating innumerable scandal cover-ups, yet confessing to his priest about lying to his wife over how well his attempt at quitting cigarettes is going. The cast are all game, of course, but Brolin, Erenreich (the new Han Solo in the up-coming spin-off prequel Star Wars film), Fiennes, Johansson, and Tatum all shine the brightest. The much advertised "would that it t'wer so simple" to-and-fro between Erenreich's silver screen gunslinger and Fienne's foppish director from across the pond sizzles with verbal dexterity and absurdity, much like Manix's meeting with a collection of faith leaders to assure the religious respectability of their Roman epic. Johansson and Tatum, meanwhile, both sparkle as they relish showing the glamour/grit divide of their characters. Indeed, Tatum's choreographed tap dance number is stunning in its complexity. 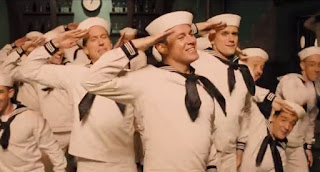 The Blu-Ray's extra content amounts to 28 minutes worth of clip-heavy EPKs: "Directing Hollywood", "The Stars Align", "An Era of Glamour", and "Magic of a Bygone Era". There's some small tidbits to be gleaned from these through interviews and behind-the-scenes footage, but they're not what you'd call meaty.

Subtler in humour than its trailers suggested, the Coen's latest is nonetheless full of mirth. It might not have the same level of verbal farce and cultish sensibility as The Big Lewbowski or Fargo, but it demands repeated viewings to luxuriate in the layers. Good.
Posted by Nick Thomson at 11:44