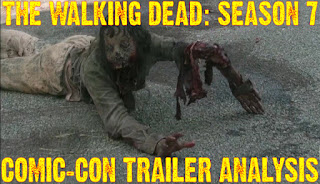 Considering that infamous cliffhanger at the end of Season 6, it's hardly a surprise that this year's Comic-Con trailer for The Walking Dead is a bit on the short side. Opening with 80 seconds worth of mood-setting glimpses at each of the characters facing Negan's prized barbed-wire-wrapped baseball bat Lucille (as the camera lovingly rises up the length of the weapon – ooh err, Mrs!), the remaining 100-ish seconds give us some scattered glimpses and teasing lines of dialogue to whet our whistles.

But what did we get to see in the trailer? Let's dive in, shall we?

Click “READ MORE” below to see some glimpses of The Walking Dead's seventh season...

Dark times are ahead for Rick and the gang. "We should have made a deal with them when we could have." says Spencer. Oh, hindsight … but would that make any difference? They killed a bunch of Negan's men – so Negan's bloody revenge was always going to happen. What is also certain is that Rick will now find himself in a weak position, brought down to heel after his show of arrogance in season six as a hardened survivor who had taken on all challengers and won – but now he's met his match.

We know that Morgan and Carol found each other in the season six finale (and can just about see her wounded and on horseback in the wide shot while Morgan walks behind), and that a new group of people – clearly not part of Negan's gang of bastards – in-turn find them. Put simply, they find themselves in the company of The Kingdom – another settlement in the area. In addition to Alexandria, The Hilltop, and Negan's compound, the 'new society' angle seems to be coming to fruition. Our survivors are resurrecting a world in which they can live in, not just endure in a hand-to-mouth manner (think back to Team Rick's harrowing low-point just before Aaron introduced himself to them in Season 5). 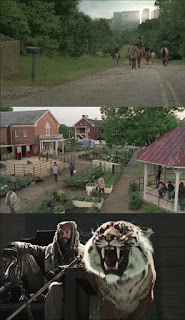 Notice in the wide shot of The Kingdom – Carol is in a wheelchair that is being pushed by Morgan. "I don't know what's going on in the most wonderful way!" says Carol, in – curiously enough – what appears to be a theatre. It'll be interesting to see these two former 'frenemies' joined together – perhaps they'll get to meet somewhere in the practical middle, after Carol's compromising 'war time actions' caught up with her and Morgan was schooled in the downside of passive living.

"I am King Ezekiel, welcome to the Kingdom" says the dreadlocked leader of this new society. Not only that, but he's accompanied by Shiva – a tiger on a chain! This was a big thing in the comics, but I did question whether they really would use it in the show. It's an out-there element that, if over-used or mishandled, could become too silly. However, if used sparingly, it could work. Time will tell. We also see a convoy leaving or returning – to The Kingdom? – in which Ezekiel is travelling. Considering the vehicles, might this be them returning from delivering goods to Negan's compound as part of their protection deal with him? This theme of servitude will be a major driving force in Season 7. 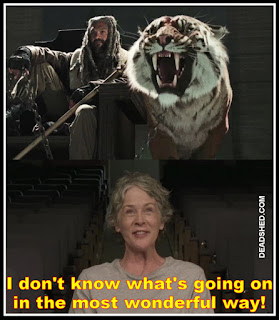 Negan's compound is also glimpsed in the trailer. Following the lead of the comics, it's an industrial location in stark contrast to the far friendlier-looking surroundings of The Kingdom or Alexandria. We also see what appears to be 'walker games' – somewhat akin to the perverse entertainment that The Governor revelled in – with chained-up walkers having buckets removed from their heads by two men, one with “F” and the other with “S” tagged on their grey sweaters. Is this some form of betting? A 'who will survive' kind of thing? 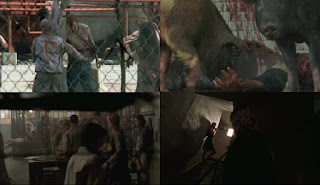 We also see what life is like inside Negan's compound. We see the main living/cafeteria area  (Dwight walks through the shot) – and see Dwight looking at a woman standing up a flight of stairs. In the comics there was a plot line involving Dwight, his wife, and Negan's harem – chances are we'll be seeing that come into play in the show.

Another thing we see are pigs eating a dead body – likely a human victim rather than a walker – and this is probably one of the many atrocities we'll witness at Negan's. They're wearing a distinctive shirt – a light grey with dark blue/grey sleeves. I checked the 'eenmie meenie' scene, and unless whoever gets beaten to death has their shirt removed, this body is probably just some other unlucky soul in this zombie apocalypse. There seems to be a brutal way of life under Negan's rule – nothing goes to waste – the bodies make good pig feed. Suffice it to say, not only is the place visually dark and uninviting, all harsh concrete and steel girders, but it seems like a place that will torture the souls of those living there.

"There are rules, you earn what you take," says Negan. Jeffrey Dean Morgan did a wonderful job bringing one of the comic's most iconic characters to life. What glimpses do we get of him in the trailer? Well, we see him knocking on the gate of Alexandria with Lucille, and hanging out drinking lemonade like a proud conqueror. Another line of dialogue goes “There is no door number four, this is the only way” … so what are the other three doors? Indeed, an unknown woman mentions that “Whatever he's done to you, there's always more”, which hints at an awful lot of future pain to come (assuming she's talking about Negan). The way the scene is edited into the trailer makes it look as if she's talking to Morgan – informing him of Negan and his ways – but the editors of these trailers are notoriously tricksy in their cutting (the respective locations appear to be different). So who knows when Morgan will receive some bad news – as if he thought the Wolves were as bad as it got!

Indeed, so bad is Negan that – so I guess, at least – one of his underlings flees, only to be hunted down by Dwight. We see a car get shunted to a halt by a truck, gunfire is exchanged, and Dwight addresses someone who appears to be the driver of the car. “Everything's his, or will be.” Bleak, much? 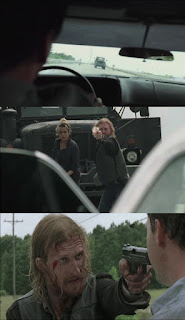 In another portion of the trailer we see Paul 'Jesus' Monroe kicking ass at The Hilltop as it is invaded by walkers, the gates wide open. What's also of interest here is that there are bodies being hanged from the elevated walkways – are they walkers, or humans? Considering The Hilltop's distinct lack of ammunition and their use of spears and hand-to-hand weapons, is this a way for them to immobilise some of the walkers from a safe height until it is safer for them to dispatch them? Intriguing... 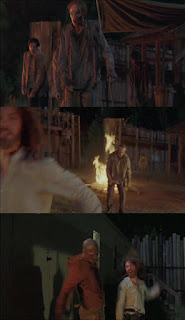 Finally – what of Tara and Heath? They split the scene after the brutal pre-emptive attack on Negan's men at the satellite outpost in season six, and it seems that they encounter some trouble on the road in season seven (of course they do! Nothing runs smoothly in this world!) In addition to dealing with a bunch of walkers rising up from piles of sand dumped on a bridge (KNB continuing to find new ways to bring signature walkers to the screen), they encounter living resistance. We see Tara choose not to kill someone and instead knock them out – no doubt looking for more information. Will they find out that Negan has their friends, or has exacted revenge upon their group while they're still out on the road? They did take a vehicle from the satellite outpost, so it's quite possible that someone could see them driving around in that and take off after them. 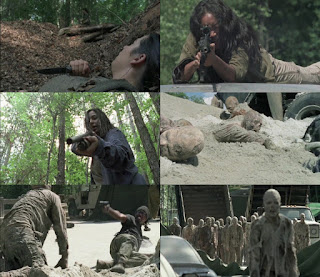 So there we have it. Toss in some groovy looking gore effects, walkers plunging from somewhere high up (a highway overpass?), Enid on another one of her walkabouts in the wilderness, a glimpse of Gregory (seeing walkers invade The Hilltop?), and sight of Steven (Trevor from GTA V) Ogg's henchman, and that's about our lot. Not so much to go on this year, but a few intriguing details that hint at the path ahead. 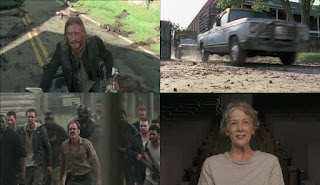 The identity of who Negan batters to death remains a mystery. I have my own theory on who it'll be – although my bet would be on two characters getting snuffed out – but I prefer to wait and see where it's going to go come the show's return on October 23rd 2016.
Posted by Nick Thomson at 17:26