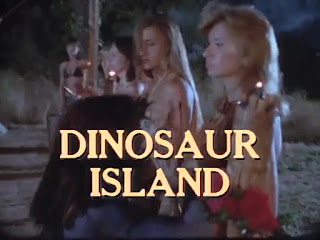 “You're about to hear one of the strangest stories in military history.” Funded by 'King of the B-Movies' Roger Corman, the intention behind Dinosaur Island was to cash-in on the likely success of the then soon-to-be-released Jurassic Park, with a thrifty-minded recycling of the T-Rex from the 1993's Carnosaur. Shot over twelve days on a budget of $190,000, with filming mostly taking place on cult movie icon David Carradine's ranch, the film was described by co-director Fred Olen Ray as “the kind of movie that if you were a fourteen year old kid, it would be your favourite movie”. Gathering a whole host of VHS-era Scream Queens and glamour models in animal hide bikinis (accurate to the prehistoric period, most surely) to scamper around betwixt natural spring hot tubs and none-more-fake-looking dino-beasties, Ray's description could quite possibly be the most spot-on statement of 1994... 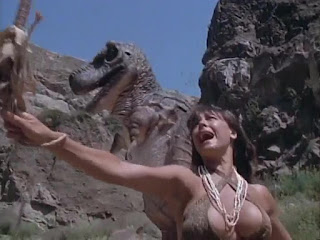 “Section 8 is a great idea, why didn't I think of that?” / “Because you're stupid, not crazy.” A military plane is soaring somewhere over the ocean, transporting a ragtag assemblage of camo-wearing miscreants, when it is forced to ditch into the water. Washed-up on a mysterious island, Captain Briggs (Ross Hagen, Bikini Drive-In) and his men venture in-land only to have a deadly encounter with a real-live dinosaur! However, things get weirder as they're rescued by a group of gorgeous cavewomen armed with spears and dressed in the prehistoric equivalent of Victoria's Secret. 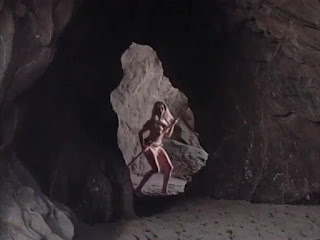 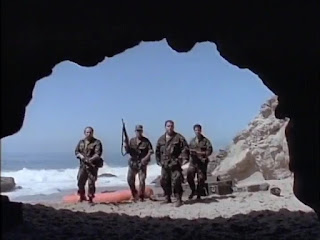 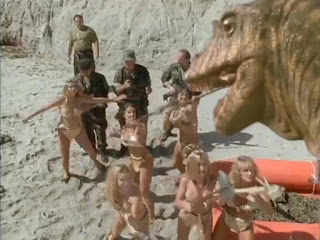 “Check out the hooters on those babes!” Captured by the buxom stunners (the beauty parlour on this island must be second-to-none), the foolish men are escorted to the women's tribal home and put on their knees before Queen Morgana (Toni Naples, Sorority House Massacre 3). There's bespectacled brainiac Wayne (Tom Shell, The Zero Boys), schlubby virgin Turbo (Peter Spellos, Sorority House Massacre 2), and shiftless wisecracker Skeemer (Richard Gabai, Virgin High), who just-so-happens to have a tattoo that matches a symbol on the cavewomen's ancient sacred scroll (which looks like it was scribbled by a toddler that morning). 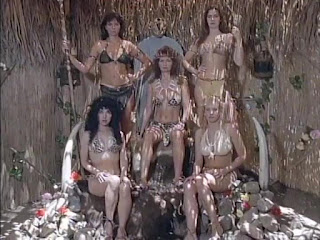 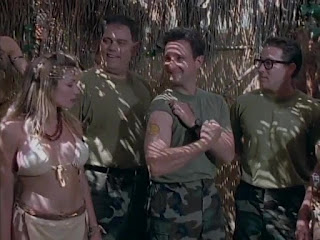 Saved from an imminent death, the men set about trying to fulfil the prophesy detailed on the manuscript, which unfortunately involves having to kill 'the Great One', the largest and most fierce dinosaur on the island. Can they triumph over the marauding carnivore, and will love blossom with these bodacious prehistoric bikini-clad chicks? 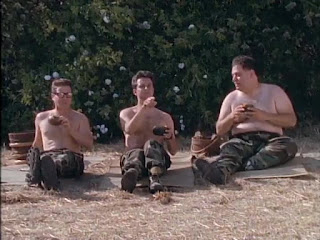 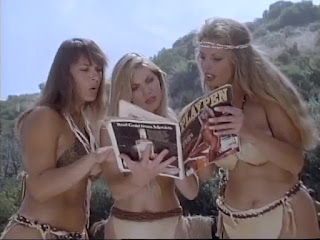 “Teach me page thirty-four.” Dispensing with any real level of violence (aside from one brief scene), the film focuses on goofy humour and oodles of flesh paraded before the camera. Quite literally, boobs are bared from the very first shot of the movie, with Nikki Fritz (Attack of the 60ft Centerfold) as the High Priestess and Becky LeBeau (Joysticks) as the latest human sacrifice offered-up King Kong style to the aforementioned 'Great One'. 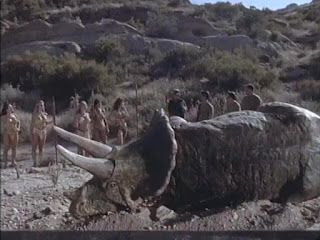 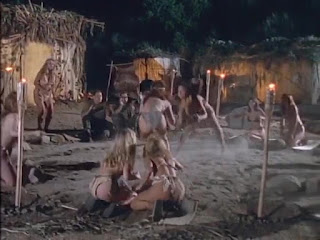 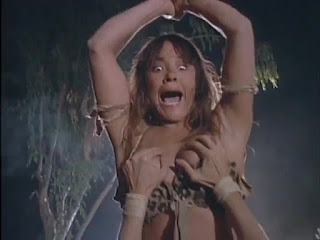 Even with the amount of low angles, jiggled ta-tas, topless bathing frolics, and softcore romps in the searing sun, Dinosaur Island never tips into sordid salaciousness simply by virtue of how silly the whole endeavour is, as well as just how much fun everyone involved seems to be having. Chief among them are Skeemer, Wayne, and Turbo's love interests in the film: April (Antonia Dorian, Ghoulies IV), May (Griffin Drew), and June (Michelle Bauer, Nightmare Sisters), the latter of whom spoke, with characteristic tongue-in-cheek amusement, about how it was a great way to get a tan while getting paid. 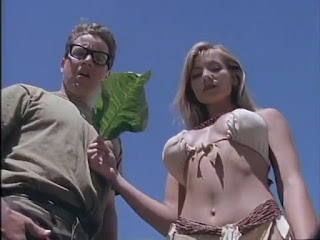 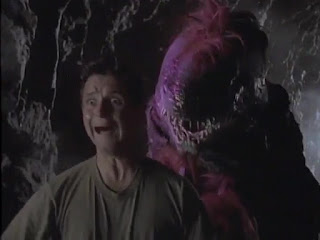 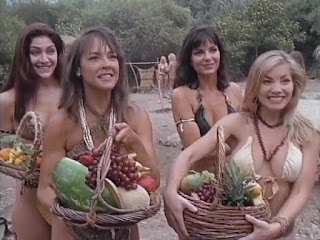 “Oh, that's a shame; looks like we're stuck on this island full of beautiful women for the rest of our lives.” Similarly, Toni Naples fondly recalled getting to thrash around in the sand with Michelle Bauer during a particularly feisty girl fight with Queen defending her authority against Challenger. Furthering the silliness are the quite unbelievable special effects, charmingly deploying a host of low budget techniques from stop motion animation composites, the aforesaid suit and articulated animatronic dime store T-Rex from Carnosaur, and forced perspective, one of the most-used effects in the film, whereby evident hand puppet dino creatures do battle with the cast, gobbling up toy soldiers for a quick meal on-the-go. 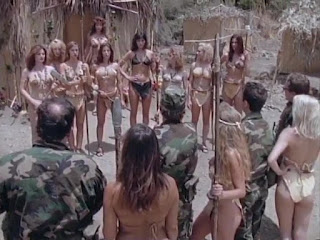 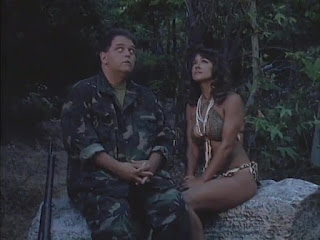 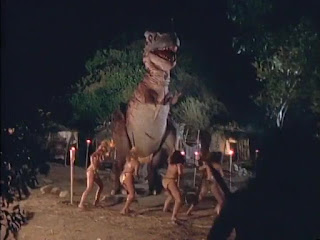 “My God, think of the cholesterol.” Roger Corman reportedly disliked the movie, written by Bob Sheridan and Christopher Wooden, but apparently heavily re-written by co-directors Fred Olen Ray and Jim Wynorski, the latter of whom is best known for Chopping Mall and perhaps most notorious for the sort of slapdash two-day-shoot softcore smut flicks detailed in the fascinating documentary Popatopolis. 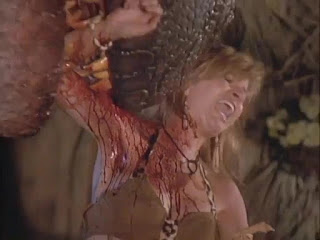 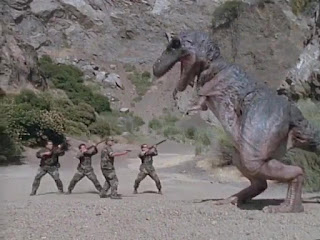 However, with a beautifully rendered poster (and with the World Wide Web far from mainstream use for you-know-what purposes), Dinosaur Island proved to be quite the success on home video and television broadcast. It's a sloppy movie, no doubt about that, shambling along in a bit of a distracted mess until it limps somewhere over the 70 minute mark (when you take out the credits), but it's nonetheless a charming mess of bikini babes, silly gags, mugging performances, and spectacularly ropey monster effects. Like many of these kinds of films, the game cast prove their value multiple times over, with Dorian, Drew, and Bauer in particular bringing big smiles and a zesty sense of fun to the screen.