In Time: The Most Idiotic Movie I've Seen in Years... 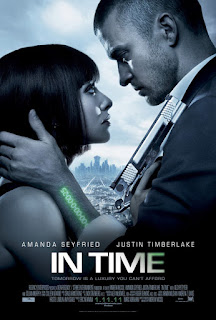 What's it about?
In the future the entire world economy has been replaced by a system of time - you work for time, you buy goods and services with time, and that time is displayed on your arm. When the counter reaches zero, you die. However, this bizarre system is connected to the invention of immortality which keeps everyone looking like they're 25 (even if most of the actors are decidedly over 25 years of age).

Andrew (S1m0ne, Lord of War) Niccol's film is stunning - in that it's stunning how this shoddy script (which he wrote, produced, and directed) was ever green lit, and how on earth it attracted so many known names to it.

Justin Timberlake plays factory drone Will Salas who encounters a 'time rich' man, who he rescues from time thieves, only to be gifted with the stranger's century of time. Crossing several "time zones", Will ends up gambling with one of the richest men in this new world order, Philippe Weis (Vincent Kartheiser), but is soon apprehended by the authorities ... for about five minutes before he makes a daring escape, kidnapping Sylvia (Amanda Seyfreid), the rich man's daughter in the process. Now it's the two of them versus the system.
Who would I recognise in it?
Justin Timberlake, Amanda Seyfried, Cillian Murphy, Vincent Kartheiser, Olivia Wilde, Johnny Galecki.
Great/Good/Alright/Shite?
Let's summarise my thoughts on this moronic mess, replete with plot holes you could navigate a cruise ship through, with a list of glaringly obvious problems as they randomly spring to mind:

Click "READ MORE" below to continue reading just why "In Time" is the most idiotic movie I've seen in years (BEWARE - MAJOR PLOT SPOILERS AHEAD)...
* Why is the little girl begging for time when your counter doesn't start ticking until you turn 25?

* If this is the future, why are the Time Keepers all driving 2011 models of the Dodge Challenger? Surely these vehicles would be decades old - and how many times do we need to see these cars burning rubber as they pull a U-Turn?

* Surely having your time displayed on your arm for everyone to see is like walking around waving the contents of your wallet in everyone's face - if you've got a decent amount of time, you're a target for damn-near anyone. When this technology was being created, didn't anyone think "hang on a minute, there might be a more subtle way of handling this!"

* Some of the fundamental flaws in the entire premise of the movie are flagged up by one character (who has a century on his clock) very early in the movie. Nevermind that though, we'll just blunder on regardless.

* Why would Will's mother pay off her rent when she knows she'll be left with a mere 90 minutes on her life clock - particularly in a world where they are all fully aware that the price of living is constantly, and perhaps arbitrarily, increasing when they're not expecting it. You would have thought that, having lived with this system for decades, even those struggling to live day-to-day would manage their time better than that - it is the key to their very existence, after all!

* Time transference - you hold each other's arms and it moves from one to another, but how on earth does the transfer work? How do you limit what you give to someone else, and how do they only take what they're owed? Also, surely it should be a consensual act - if you're asleep, time can be easily given and taken away - that is a massive, fundamental flaw with the technology. You've invented immortality, but you've left that exploitable flaw wide open for abuse.

* Arm wrestling - in a clunkingly obvious scene, Will explains to his kidnapped rich girl companion Sylvia how the time-based version of arm wrestling works. When someone looks at your remaining seconds, you flip their arm around - but surely they'd notice when that happened and just twist your arm back? What if you're physically weaker than them? It's a past-time that makes no real sense.

* The Mission - a charitable sort gives out time for free to the impoverished citizens of Will's "time zone" (each zone segregates the populace in a mind-numbingly blunt attempt at socio-political satire) - but surely these impoverished people could also use something to eat and drink? Yeah, you could have a load of time on your clock, but if you don't eat or drink, surely you'll die? But then how does that fit in with the immortality technology? Either you can die of starvation and thirst, or there's no point in eating and drinking? They seem to suggest in the movie that the only way to die is a random act of violence (like being shot in the head).

* Will works in a factory, he's seemingly an everyday drone - so how come he's extremely capable in a fight and very handy with a gun? There's no explanation at all.

* There seems to be some importance laid on Will's father - but that's forgotten about swiftly.

* Will's mother has just died, so after a quick cry in the street, he gets chauffeured into the richer time zones (surely the chauffeur would recognise that Will isn't the same guy as the one who had the century of time on his arm in the first place?) - anyway, off he trots, staying in fancy hotels and buying expensive food and living the good life, then he's very quickly gambling and then he's caught, and then he kidnaps Sylvia. Apparently his mother didn't mean much to him after all.

* Vincent Karthiser's bad rich man Philippe has a vault in his flat, in which is a device that holds one million years on it. Later on Will and Sylvia go to rob a time bank which is bloody massive. However, it's clear that you can have a shitload of time on a very small metal device - why would you need all that space? Is it to house loads of those devices? If so, why on earth would you put all your eggs in one basket?

* Why does Cillian Murphy's time keeper forget to top up his clock with his government-sanctioned daily per Diem? He's been doing this job for fifty years apparently, so surely he'd never forget to do that? Oh wait, he did.

* Will and Sylvia initially act out as Robin Hood type heroes to the impoverished masses (if they're so displeased at the rich zones, why don't they rise up against them?), but these simple-minded actions mean that the big guys in charge just jack up the cost of living (another crunchingly blunt slap of social satire, that these citizens should surely be very aware of already) - so ultimately they seek to crumble the entire world economy by distributing countless millions (billions?) of years to everyone freely. Great, but what about the entire world economy - the very thing supporting this entire society?

* Despite being in place for at least decades, apparently not one single person has thought to themselves "you know what, immortality isn't all it's cracked up to be" and committed time-suicide, before the events of this movie. This comes as a surprise to everyone in the film. What the hell?

* As previously mentioned, major flaws with the premise are highlighted in the early portion of the film. One major problem - what about the population numbers? Surely there's too many people on the planet? And what good will come of giving out free time in regards to the population numbers? They all need to be fed, watered, clothed, and housed - a financial and social apocalypse would surely result.

* If the rich folks who invented this totally unexplained immortality technology just wanted to live forever, why didn't they just keep it for themselves, rather than giving it to the entire world, thus replacing the entire financial system in the process? If you've already got control - you've already got control - plus having the gift of immortality to yourself (or among a select few puppet masters), why would you bother distributing it to the entire world? You're replacing one system that is long-established and working, with another that simply exchanges money for time and, if anything, makes the entire system far more complicated and wide-open to gigantic problems. It's utterly idiotic.

* Will's best friend and co-worker is gifted, by Will, a decade of time. Soon after, Will discovers his friend drank himself to death with nine years on his clock - why did Will not know his friend was an alcoholic? If he wasn't, why would he suddenly drink himself to death, particularly when he's got a wife and kid at home who he seems to love and care for?

* Not a plot hole, but the CGI on display when Will's Jaguar crashes is absolutely appalling. The animation is just crap - the physics of the object are completely unrealistic, and being a convertible, it's amazing that nobody's head was caved-in during the tumble.

* Wouldn't it be bloody annoying to have a green glow emanating from your arm all the time? When you were asleep that'd be shining in your face all night.

* This issue isn't a plot hole, but the script is drowning in time-related puns. Law Enforcement are called "Time Keepers", when people die they "Timed Out", beggars ask "You got a minute?" ... and that's just the start of it.

* In this future world they have advanced facial recognition software patched into their entire security camera network, and while frequently chased (and even caught), Will and Sylvia continually escape custody - they even go on to become a veritable Bonnie & Clyde by the end of the film - how can they be capable of constantly evading arrest?!

* Which reminds me, at one point the duo get on a bus - their faces have been shown all over town on video screens (with a handsome time reward on display) - and despite being full of passengers, only the bus driver recognises who they are!

That's everything that springs to mind right now, but as you can see, In Time is monumentally stupid - the plot holes are endless and simply gargantuan in size. The script is dreadfully ill-thought-out and as blunt as a sledge hammer, some of the performances are dead-eyed and dull, and about the only thing going for it is that it's fairly stylish in its presentation (the cars look rather nice). In more talented hands you could have made a decent Twilight Zone episode out of the basic premise, but instead we've got this. So is it great, or is it good, or is it merely alright ... or is it just simply shite? Well, it's immeasurably, unendingly, catastrophically, unbelievably, stunningly, exasperatingly, insultingly, and factually total and utter shite.
Posted by Nick Thomson at 18:08