* In a welcome moment of levity, the show makers injected a little sauciness into proceedings. In the comics there was a running joke about Glenn and Maggie shacking up like a pair of rabbits, and here their guard-tower tryst brings a sense of fun to an otherwise harrowing episode. 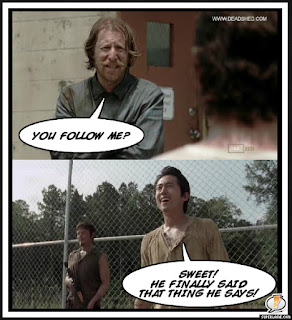 Click "READ MORE" to continue the debrief (spoilers ahead!)...
* Michonne got a little more to do than scowl in this episode, surveying evidence from The Governor's encounter with the military guys from the last episode. I have wondered about this in the last episode: if you're suspicious of a group of people you're trapped with (without your weapons and surrounded by armed guards), don't scowl so much, you're showing your hand a little too much, surely?

* Andrea seems awfully taken-in by The Governor - but just because we the viewer know he's no good, doesn't mean Andrea does. The big guy has taken-in an entire town of dozens of people, who are distracted by safety and a sense of normalcy, so it isn't a big push to suggest that Andrea would fall victim to the same temptations. That said, Michonne could be a little more open with Andrea in her arguments against staying.

* Teleporting zombies - now and then there are moments of staging that fall below par, and the reveal of a group of walkers inside the main gates was a bit too much of a cheat. Moving across Lori, Hershel, Beth and Carl, one moment they're there, the next they're not. It's a reveal that's a bit too obvious and goes too far down the cheat path. Sure, if your attention is drawn elsewhere, you could suddenly find yourself in trouble, but the translation-to-screen of that point-of-view moment just felt a little too cheeky here. A mere nitpick.

* Pacing issues - there's so much chaos at the prison, with so much drama, that to cut away after a shocking moment (such as T-Dog getting bit, or Lori going into labour) to an advert break or a rather calm scene in Woodbury makes for a jolting gear change. Furthermore, T-Dog's heroic end is cut short - as emotional music swells, we suddenly cut to an advert. We didn't get enough time for the moment to fully land, so the hurried pace was at times frustrating. Yes, the characters wouldn't have enough time to let it sink in, but the viewer must be allowed a little more time to comprehend the horror - a mere few seconds more would have sufficed.


* As I'd theorised, because we didn't see Andrew killed by walkers when he was locked out by Rick, it was he who become the titular antagonist. It was a costly mistake of Rick's, and one that will surely eat away at his insides, but on the other hand it provided the impetus for Axel and Oscar to prove themselves to their new leader.

* Drama - blimey, this episode had it by the truck load!

T-Dog goes down swinging in order to help Carol reach safety - already bitten on the shoulder, he gets his arm and throat shredded by two more walkers. A true sacrifice where the gore doesn't distract, but simply adds to the pain of the moment.

BEST TWIST ON THE COMICS:

Lori lasted far longer in the comics, and being that this is only the fourth episode of the season (four more to go for this half, then eight more from February), the loss of her during childbirth comes as a massive punch in the gut. I never had a real problem with Lori (unlike many out there in some quarters of Internet land), and her loss packs a considerable wallop - Callies' performance during her farewell speech to her son Carl, combined with Lauren Cohan's panic, and Chandler Riggs' sense of hopelessness, left not a dry eye in the house. Her loss will have a huge impact upon Rick, who never got to properly patch things up with her after a rough several months on the road. The fact that Callies' stated in an interview that the speech she gives to Carl was one that her character had been rehearsing for months makes it all-the-more powerful.

With the threat contained, the disparate members of the group reconvene but with Lori and Carl still missing, Rick is desperate to continue searching. Then he hears the cries of a baby - his baby - and suddenly, with the aid of the trauma written large across Maggie's face, and the dead-eyed look to Carl, Rick's world comes crashing down. Andrew Lincoln gives a harrowing performance as he falls to the floor and crumples into the foetal position - a shock-filled episode comes to its horrific conclusion. Just the moment where he realises that Carl had to make sure his own mother stayed dead was enough to bring a tear to the eye. Wow. Enough said. Wow.
Posted by Nick Thomson at 11:33