Today I filmed the new DeadShed Productions short film - it's called "Skinner", and it's a noir-inspired horror piece about a forensic detective examining the scene of the latest victim of the titular psychopath. 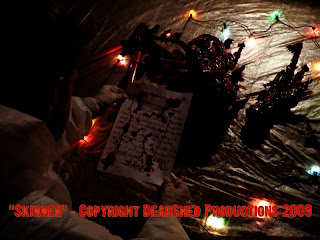 (Click the image for a larger view).
All the dialogue is done through a narration - a noir-inspired voice inside the head of the protagonist, who is played by Sean Connel, who has previously helped me out on 2005's "Trapped", and 2008's "Signing Off".

The short itself - which I'm aiming to edit it to around five minutes max - was conceived on Monday (yes, as in six days ago) when Sean emailed me saying he was coming back from London for a week and was wondering if I had anything to film. He fancied doing a bit of acting in a short film, and indeed I fancied shooting a new DeadShed short.

Annoyingly however, I didn't have anything at the time - I most definitely wanted to shoot something, but what? I put my thinking cap on, and referred back to some of the wisest advice I've ever read - from Robert Rodriguez - list things you have at your disposal, and put those in your movie. Indeed that's what I did - I knew I had these gory props I was going to use for the as-yet unfilmed third entry in the Zombie Man series (one day, I promise), as well as a gas mask and boiler suit (for the same as-yet unfilmed project, actually).

I then thought about 'what kind of movie could contain these things?' - and there we go, it grew from there. That afternoon I started bashing out the short script, while consulting back and forth with Sean on the direction I was taking, and had it all finished up the next day.

Ahead of filming (on Sunday 2nd August 2009) I gathered all the props and such together and 'dressed the set' ... ... otherwise known (when you stop looking through the camera's lens) as 'putting things near each other in the garage', haha.

Indeed, this was a case of quick and sharp filmmaking - conceiving of the idea, writing the script, and getting it shot all in a week - and that's a very relaxed week too. If we'd compressed the time this is the sort of thing you could put together during one of those '48 Hour Film Festivals' - although I am planning to spend more time on the editing than such a festival would allow.

As for working with Sean again, it was great - he was spiffing last year when we did "Signing Off", and he was even more spiffing today. I could see how he has developed his acting (which is his chosen career path - I guess we've both chosen hard careers to pursue, ha!), and it was nice to (for myself anyway) put together another little narrative short.

It all helps in improving (and experimenting with) my writing, camerawork, editing and direction - indeed I felt more confident than last year when directing. I have improved my focus in what I'm looking for, and improved my communicating of those ideas. Of course each year has been a case of improving on those four key areas, naturally, it's just that this year I was paying attention to the development (for both Sean and myself) at the time of the shooting.

We were able to shoot the short very quickly, which is always nice, and as I'm beginning to wrap up on this educational DVD about the environment, I'll be able to fill the downtime with editing for this new short film (before we get going on another educational DVD, that is). Plus it was nice to get the DVX100B into action again, as of late I have been mostly editing - so it's nice to mix things up a little - and as a further bonus, I get to indulge my love of making horror-themed films.

More news on it as-and-when, of course, but I just thought I'd throw up a blog about it in the mean time.
Posted by Nick Thomson at 18:52

Dude, I can't wait to see this.... A lot of your work has inspired me to do better, and I am hoping one of us can hop across the pond to work with the other.

Cheers Gary, and I'm not just saying this, but your work inspires me to do better too. So I guess we help each other out.

And hell yeah, one of these days when I have the money, I want to get my ass over there to the states.